Home News ‘A Drop in the Ocean’ project highlights the staggering number of bottle... 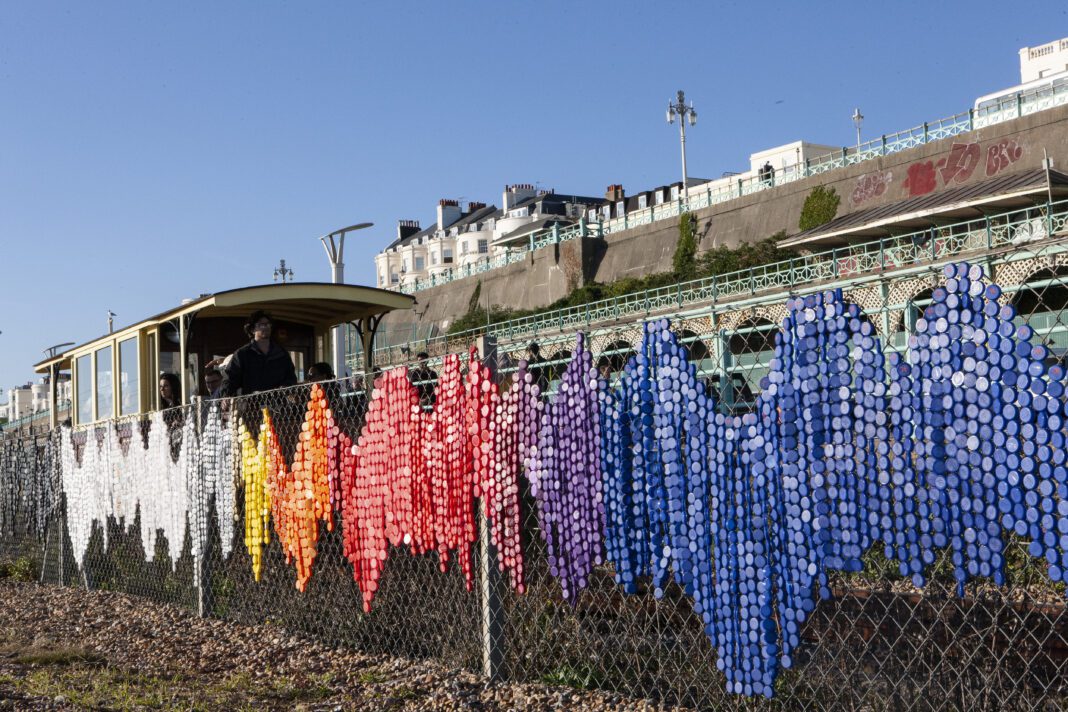 In perspective, this tower would be two and a half time the size of the i360, and it would be 100m taller than the highest skyscraper in London, The Shard.

Irene Soler, a Brighton designer and artist, is the woman behind the collection of these caps, along with the Cityclean team and local volunteers. She used the caps from water, milk, fizzy drinks and more to create a ‘wave’ art installation besides the Volks Railway.  She says:

I chose bottle tops for the project because they were something I was finding almost every time I walked on the shore.

They are small enough to be swallowed whole by many sea creatures, may be slow to degrade, may float for a long time, and are among the top 5 items found on beaches around the world.

Besides being easy to store and count, I felt the tops’ bright colours would make an eye-catching design that I hoped would raise awareness about leaving plastics and other rubbish on our beaches and the impact this has on our oceans.

The project was named ‘A Drop in the Ocean’ and it ran from March to November last year. Thanks to more than 150 local volunteers, the artist collected tens of thousands of bottle caps which would have otherwise ended in the sea, and created a 50m long wave on the fence of the famous railway.

People would rightly be shocked and horrified if someone pushed a column of plastic bottles tops two and a half times the height of the i360 onto the beach and into the sea.

But every time someone leaves a bottle top on the beach or seafront they are adding to that massive column and endangering our sea life.

I’d like to congratulate Irene and everyone involved in creating the art and for bringing this problem to the attention of the public in such an imaginative way.

For the summer months, when we tend to spend more time at the beach, often consuming food and drinks, Irene wants to remind us all of a few easy steps we can take to reduce the amount of rubbish we leave behind:

You can find more information about the project, from its origins to its different stages, on its official website.