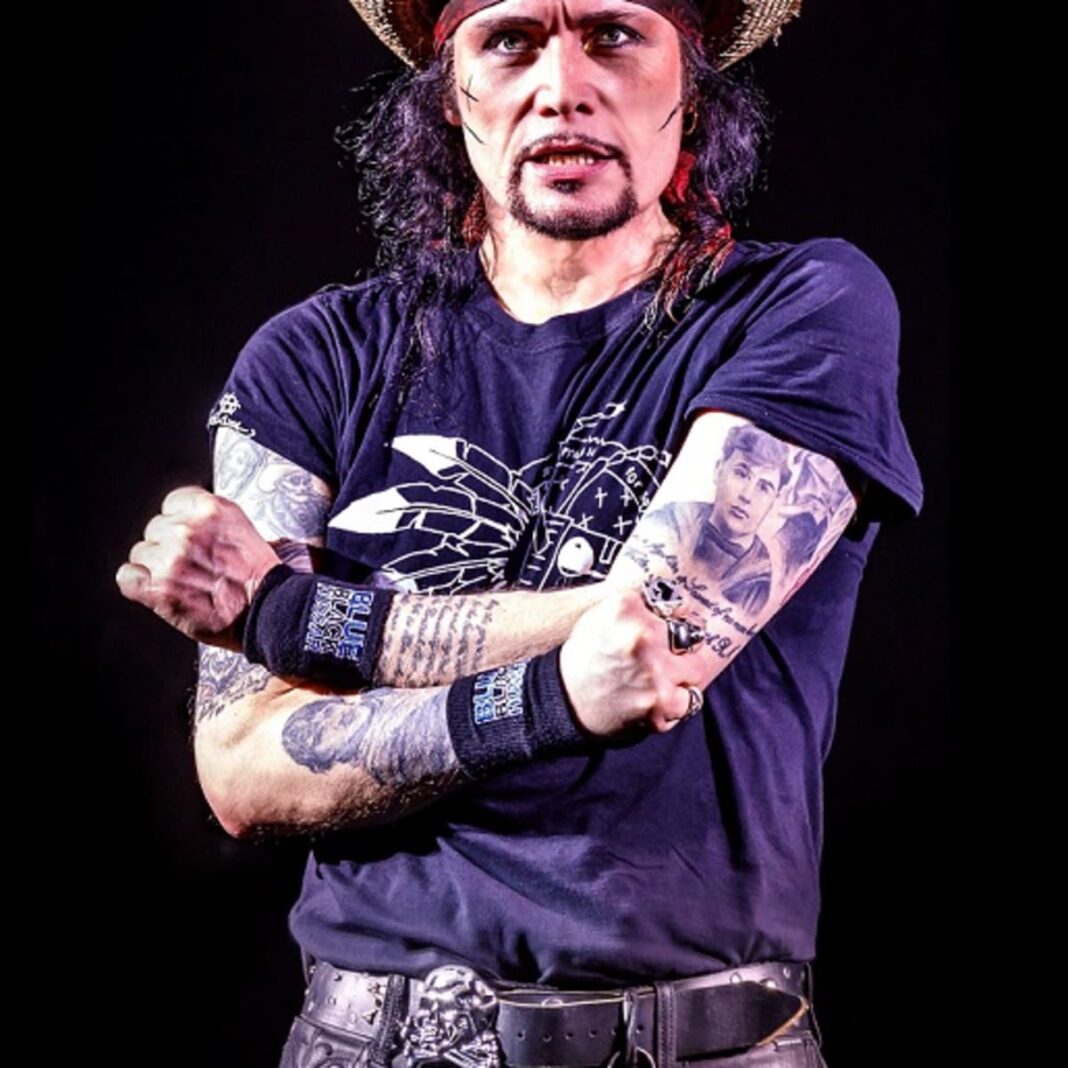 With Adam Ant announcing a US and Uk tour  and a return to paly in Brighton in March allbeit in 2022 we thought we would take a look at the 80’s ledgend and some of his career highs. Did you know Adam Ant had 8 Singles in the top 40 at one time ? . . more than The Beatles !!

It was on a Thursday night, 16th October 1980, when millions of living rooms across the UK, were set on fire by a blazing TV performance by Adam and the Ants.  After 3 ferocious, minutes of ‘Dog Eat Dog’, on the weekly music show, Top of the Pops, the phenomenon rapidly began and they would go on to dominate the charts with extraordinary success. 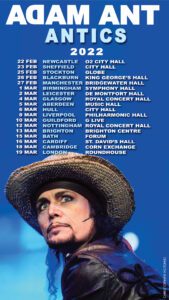 But this was no ‘overnight success’, Adam Ant had been working hard behind the warpaint and feathers for his moment. The journey had started at Hornsey College of Art, where Adam had teamed up with some college friends to form the band Bazooka Joe. With Adam on bass guitar, they played the pubs and colleges around London and it was on a night in November 1975 that he saw a group that was to change his life forever.
The Sex Pistols played their first ever gig, supporting Bazooka Joe, at St Martins College of Art and the explosive punk band inspired Adam to start something new.  He formed The Ants and performed live repeatedly at many venues including the Vortex and The Roxy before getting a Thursday night residency at the famous Marquee club in London.  The band built a huge cult following despite being unpopular with the established music press, and in 1979 they released their debut album, Dirk Wears White Søx, which topped the independent chart on release. It has been said that if Adam and the Ants had appeared on television at this time, then they would have ‘made it’ but the moderate success made the rest of the band despondent and in early 1980, the Ants left Adam, after an offer to work with the former Sex Pistols manager, Malcolm McLaren.
With a new sense of freedom and clarity, Adam immediately put his ideas for a new ‘warrior’ sound into practice and within months had put together a fresh band that included two drummers.

The new band signed a major label deal and recorded the album ‘Kings of the Wild Frontier’. Released in November 1980 it became a worldwide hit, spending 12 weeks at number 1. The singles, ‘Kings of the Wild Frontier’ and ‘Antmusic’ both hit number 2 in the UK chart and ‘Dog Eat Dog’ reached number 4. “Antmania” swept the nation and after winning the Brit Award for ‘Best British Album’, Adam Ant became one of the most publicised faces in Britain.

In May 1981, ‘Stand and Deliver’ hit the number 1 spot and stayed there for 5 weeks, and became his most successful single, winning him the prestigious Ivor Novello Award For Songwriting. On it’s release, the follow up album and single ‘Prince Charming’ went straight to number one and a further 12 singles went top 30, at one point, Adam had 8 singles in the top 40. . . in one week!
He became the first VJ (video jockey) on MTV and at a time when videos were the most popular way to promote music, Adam’s charismatic performances in some of the most lavish visuals of the period paved the way for his acting career.

His first solo album, ‘Friend or Foe’ continued his success in the USA, delivering 3 top twenty hits on the Billboard Top 100. ‘Goody Two Shoes’ was also a number 1 in both the UK and Australia and after being voted ‘Sexiest Man Alive’ by the viewers of MTV, he celebrated this success in the USA with a ‘Best New Artist’ Grammy nomination.

In 1983 he appeared on NBC Television Network’s ‘Motown 25 Special’, alongside Michael Jackson and Diana Ross. The second solo album ‘Strip’ produced the top 5 UK hit ‘Puss ‘n Boots’ but the follow-up single ‘Strip’ and the sexy spectacular video was banned by the BBC.

While recording his third solo album ‘Vive Le Rock’ with legendary producer, Tony Visconti, Adam set out on an acting career by appearing in a theatre production of Joe Orton’s ‘Entertaining Mr Sloane’ at The Royal Exchange in Manchester.

In 1985 Adam performed ‘Vive Le Rock’ at Live Aid and spent the next few years concentrating solely on acting in a string of films including Nomads, Junk and Slam Dance! as well as appearing in several US TV shows such as La Femme Nikita, Northern Exposure, The Equalizer and Sledge Hammer!

During the 1990’s, Adam again, split his time between acting and music, returning to the studio to record and release the album            ‘Manners and Physique’ in 1990 which included the UK top 20 hit, ‘Room at the Top’. The follow up album, ‘Persuasion’ remains in limbo without an official release to this day, but in 1994 Adam recorded his next album, ‘Wonderful’ in London’s famous Abbey Road studios. Released the following year, the album, along with ‘Wonderful’ the single and the follow up ‘Gotta Be A Sin’ were accompanied by successful tours of the UK and USA.

It would be twelve years before he would play live again, with an acoustic show, in 2007, at the Bloomsbury Theatre in London, where he read extracts from ‘Stand and Deliver’ his recently released autobiography.

In 2008, Adam was presented with the ‘Q Music Icon Award’ placing him alongside fellow recipients Paul McCartney and Bryan Ferry. This rekindled recognition resulted in a series of low key gigs in 2010 which enabled him to select a new band and to perform several sell-out shows in London.

In 2011, Adam performed at the Hard Rock Calling in London’s Hyde Park and over the year continued playing live to over 250,000 people.  After 2 successful tours the USA, mainland Europe and Australia, Adam released his first album for 16 years: Adam Ant is the Blueblack Hussar in Marrying the Gunner’s Daughter.

2014 saw Adam return to his roots to perform the Dirk Wears White Søx album at a sellout show at Hammersmith Apollo, along with 2 live performances for Record Store Day in London that afternoon. This coincided with the release of a limited edition white vinyl of the Dirk album.

Adam then closed the year with 4 more performances at Islington’s Assembly Hall.

Due to public demand Adam toured the Dirk album early in 2015 at a series of intimate concerts around the country to much critical acclaim with several of the venues selling out within minutes.

With the LP back in the charts, the sold out tour had Adam playing the classic and now iconic album, in sequence, to over 30,000 people, which culminated at Brixton Academy in London in a true riotous Ant gathering with fans coming together from all around the world to be part of the spectacle.

Over the summer of 2016 Adam took part in the Isle of Wight festival closely followed by 3 headlining slots at each of the Rewind festivals in Perth, Cheshire and Henley.

After the phenomenal success of the Kings tour Adam returned to the Roundhouse venue in Camden for one additional sold out date, in his hometown, to finish off the year in a glorious celebration of style and jubilation.

After the global pandemic of 2020, Adam was very pleased to announce his Antics Tour of 2022 which will include dates in the UK and USA.

Winner of the 1st BRIT Award