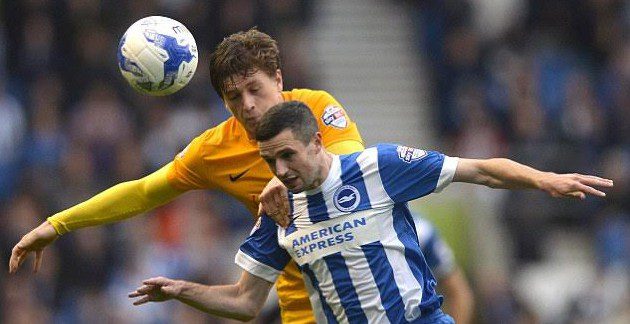 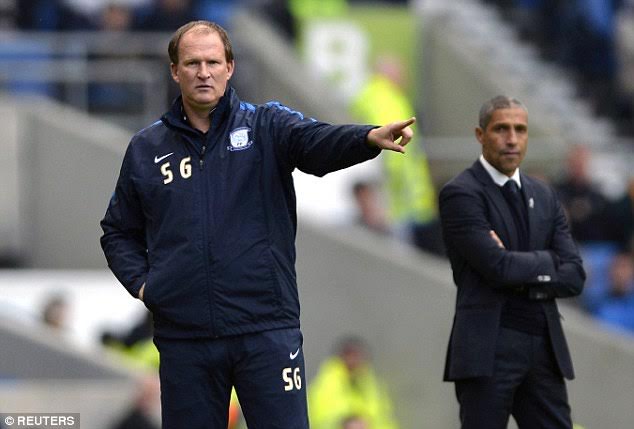 Neither manager could complain about the draw after a poor contest on the south coast. Picture from: http://www.dailymail.co.uk/sport/football/article-3287771/Brighton-0-0-Preston-Seagulls-unbeaten-start-continues-league-leaders-held.html?ITO=1490&ns_mchannel=rss&ns_campaign=1490

Brighton & Hove Albion had to settle for a point in a drab affair with Preston North End, which saw more yellow cards than shots on target, as neither side managed to break the deadlock.

The 0-0 stalemate was Brighton’s fifth draw of the season, stretching their unbeaten run to 13 league games, with other results going their way to maintain a four point lead at the top of the SkyBet Championship.

The Albion made three changes going into Saturday’s game, with the ever present midfield partnership of Dale Stephens and Beram Kayal missing due to injury and suspension respectively, leaving a fully fit Andrew Crofts and Rohan Ince to slot straight into central midfield.

Preston arrived unchanged at the American Express Community Stadium, following a comfortable 3-0 win against Charlton Athletic; however their form prior to this was less convincing as they entered the game sitting in 19th position. 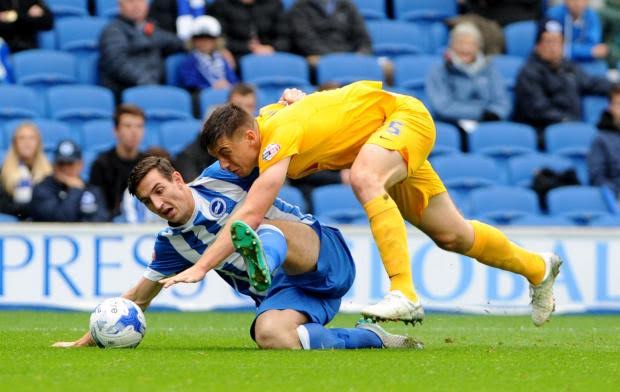 Lewis Dunk was lucky not to concede a penalty after tugging Jordan Hugill’s shirt. Picture from: http://www.theargus.co.uk/sport/13894213.Bong_worry_as_Albion_drop_points/

The away side had an early shout for a penalty, as Lewis Dunk found himself on the wrong side of Preston striker Jordan Hugill and after what appeared to be shirt pulling by the Albion centre half, Hugill hit the deck but referee Andy Davies wasn’t convinced and waved on play.

Tomer Hemed then tried his luck at the other end, receiving the ball after some creative work by strike partner Sam Baldock, but the Israeli forward saw his effort go sailing over the bar when he really should have done better.

An Eoin Doyle glancing header was then parried away from goal by David Stockdale and minutes later, the Albion were rewarded a free kick in a dangerous position after a confident surge on goal by returning winger Jamie Murphy.

A neat routine from the set-piece enabled Murphy to get a clear sight on goal and his low stinging drive was palmed away by visiting keeper Jordan Pickford.

Little did Albion fans know, Murphy’s effort was to be Brighton’s only shot on target in a game that lacked creativity and urgency throughout.

Hugill forced Stockdale into a low save shortly before the interval, with a tame effort on goal concluding a forgetful half of football at the Amex Stadium.

Preston created the first chance after the break, as their influential playmaker Gallagher saw his effort go wide of the upright within the opening minutes of the second half.

The uneventful character of the contest continued and Albion manager moved quickly to shake things up, replacing top goalscorer Hemed just after the hour mark, with Bobby Zamora who netted the winner in back to back games prior to Preston’s visit.

Zamora’s presence was less effective than in his previous appearances, as Preston’s trio of central defenders continued to dominate the battle in the final third of the pitch.

Joe Garner was soon introduced by the visitors and he came close to making an instant impact, as he looped a header over a stranded Stockdale, only to see his effort cleared off the line by Albion’s man of the match, Bruno. 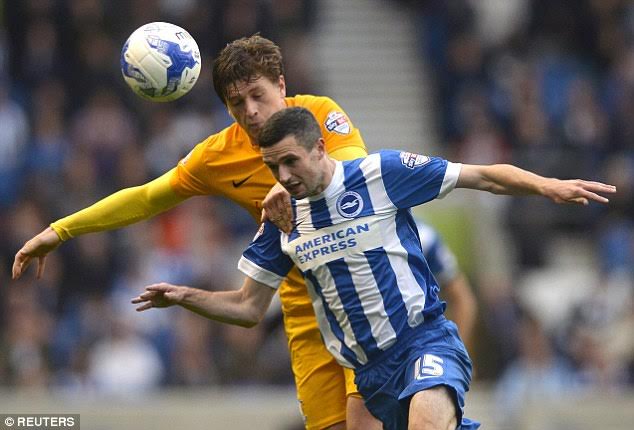 Danny Holla and Solly March were thrown into the mix, but the home side struggled to find a foothold in the game, as they missed the fluency they had shown in previous games.

The Albion were then forced to play eight minutes of stoppage time with ten men, after consistent full back Gaetan Bong was carried off the field on a stretcher, following a non-contact knee injury that saw the Cameroon international hit the ground in pain.

Fortunately for the Championship leaders, Preston were unable to break down the ten men behind the ball and the final whistle blew, securing a point for both teams in a poor game that will soon be forgotten.

Next up for the Albion, a short trip to the Madjeski Stadium on Saturday, as Reading will be looking to bounce back from a 4-2 defeat at Fulham and install Albion’s first defeat of the season.

What to Do on Halloween – Part Two