Local shop Oliver’s Brighton, on Trafalgar Street, has been selected by the Brighton public to compete for Britain’s Best Small Shop 2019.

To celebrate being shortlisted for the Best Small Shop Awards, Oliver’s is running a charity raffle until October 31st.

All proceeds will go to Sussex Homeless Support, a Brighton charity providing advice and support for homeless people in the city. Oliver says he is glad to support this charity, as it’s “always there” for the homeless.

To date, the raffle has smashed its target and raised over £1,000 for the charity. 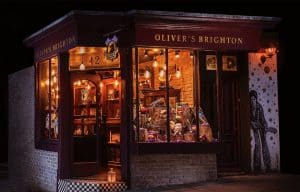 Despite being a late entry for the award, which Oliver had “no idea” existed until a local shop owner mentioned it to him, he said the award would make for an “ideal birthday present.” Winners are selected on November 5th, six days before the shop’s second anniversary.

Oliver’s brilliance and popularity hasn’t gone unnoticed, it has already won several awards. Including, Brighton and Hove Business Awards 2018 Startup of the Year, One to Watch for Best Independent Retailer 2019 and TripAdvisor 2019 Certificate of Excellence.

It’s clear that Oliver cares deeply about his store and wants his customers to have an unforgettable experience.

“Last week a mum came in with her autistic son from London,” Oliver said. “She sent me a message in advance to say that he sometimes finds shopping environments challenging. The next day they left a really lovely review to say it was one of his most comfortable shopping experiences.”

The magical shop now boasts over 500 different items of stock, which Oliver says is the result of loyal customers who ‘spur him on’ to find new and interesting items. The shop’s loyalty programme has reached 200 members. Customers from as far away as South America, Australia and Japan have stepped into the shop during their visit to the UK.

The body of Amelia Bambridge has been found at sea

Leftfield methods working their magic at the AMEX