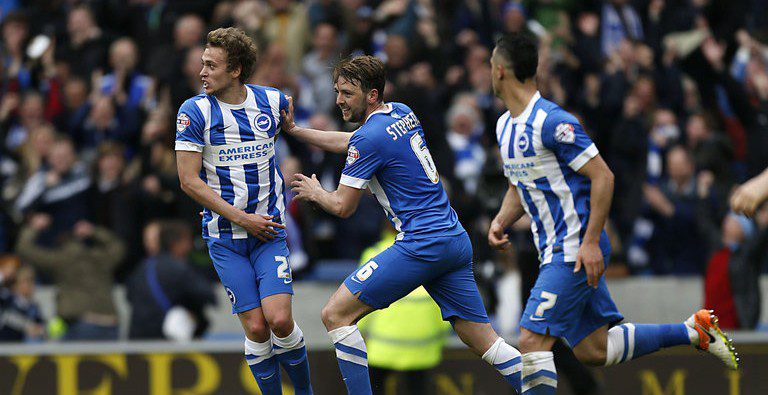 On Monday afternoon, the Amex Stadium erupted following James Wilson’s 95th-minute equaliser with the hope Brighton & Hove Albion had enough time remaining on the clock to rescue all three points, which would have meant a draw on the final day would secure promotion to the Premier League.

His effort proved too little too late, as referee Robert Madley blew for full-time, but come Saturday lunchtime at the Riverside Stadium, Albion’s late show, that was cut short, may well prove a blessing in disguise.

Albion travel to Middlesbrough on Saturday, knowing victory is the only choice they have, with Boro needing just a point to secure the final automatic promotion spot, thanks to their slim goal difference advantage.

The home side have more cards to play with, but that isn’t necessarily the best position to be in. Depending on the scoreline late on, Boro could find themselves stuck in two minds, as Aitor Karanka’s team flirt with the possibility of sitting back on a draw, which would hand the attacking initiative to the Championship’s leading goalscorers, Brighton.

It’s a dangerous game to play, but an avoidable one if you manage to start the game well. An early goal for the home side would give Albion a mountain to climb, needing a minimum of two goals, which would mean pressing forward and leaving themselves vulnerable to conceding again at the back.

On the other hand, Middlesbrough’s safety net is more forgiving, knowing a goal conceded would only leave the Teesiders one goal from putting themselves back in control. If that is the case, Albion could then be enticed into holding onto a slender lead, with Jordan Rhodes and co. plotting a late goal to break the hearts of more than 2,000 Seagulls fans making the long trip north.

For Albion, the longer they can stay in touch with victory, the more active Middlesbrough minds will become. Pressure will begin on the shoulders of both teams but once the contest enters the later stages, the weight will increase and if Albion find themselves in a similar position to how they started, Boro could fall victim to their own mental uncertainty.

Albion have the firepower to beat Middlesbrough, there’s no doubt, but keeping a clean sheet would provide the perfect platform to build on. The home supporters will grow restless as Boro’s careful approach is deployed, leaving the home side clinging on as Hughton’s men push forward in search of a winning goal.

It would be hard to argue with Middlesbrough if they do sit back, considering they boast the best defensive record in the Championship, conceding just 30 goals and recording 22 clean sheets. However, if there’s one team that could unsettle their stance, it’s surely Brighton, who have scored the most goals in the league, with 71 compared to Boro’s 62.

Lewis Dunk is suspended for the eagerly-anticipated clash, but club captain Gordon Greer will return to the starting line-up, adding both leadership and sensibility to Albion’s starting XI. Hughton has named the same team in back-to-back games, which he is likely to do again, aside from Greer’s inclusion, but Wilson’s late goal and Jiri Skalak’s inactivity against Derby County could draw possible changes.

Whatever happens, Albion’s season has been nothing short of spectacular, rising from the depths of potential relegation last year to the dramatic scenes that will take place on Saturday afternoon, as Brighton & Hove Albion aim to reach the Premier League with victory at the Riverside Stadium.