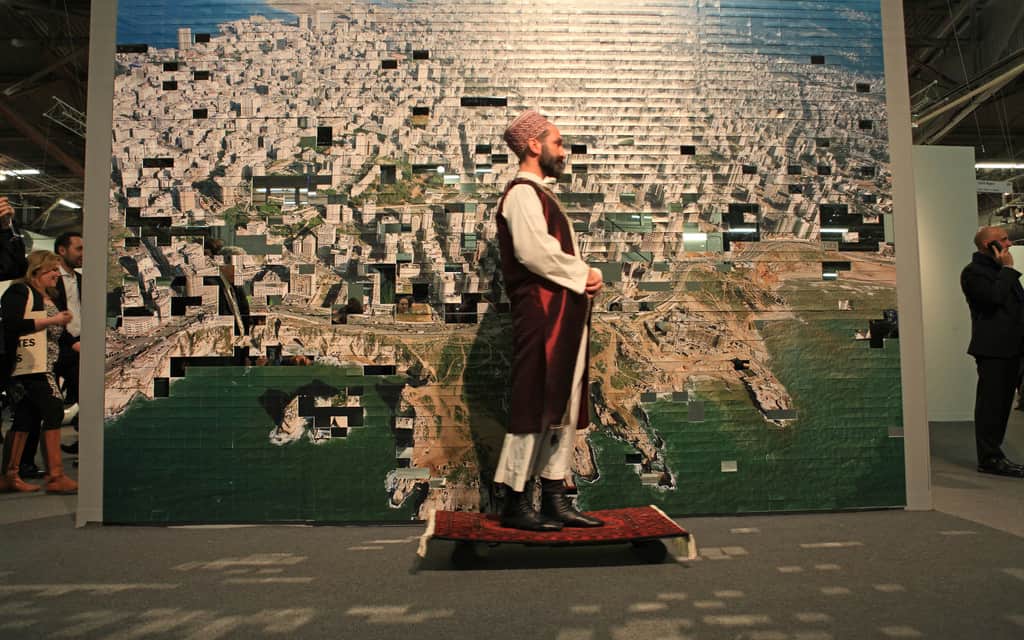 Born in 1969, Darvish Fakhr grew up in the U.S. before moving to Britain where his practice has been based for the last two decades.

He trained at the School of the Museum of Fine Arts, Boston and the Slade School of Fine Art in London. In 2004 he won the BP Travel Award and used the opportunity to go to Iran and paint local people in Tehran and Isfahan.His paintings show the depths of emotion behind outwardly ritualised lives and aim to help us understand the common humanity that links the Western world and the Middle East.Movement and dance is a natural and constant in his life that is mirrored throughout his work. He lives in Brighton, East Sussex.

You are of Iranian, Canadian and British heritage. How has your culture contributed to your art?

I grew up in America as a half Iranian during the hostage crisis. It was emotionally brutal and there was a lot of shame attached to it. But ‘art’ is like alchemy, and since then I’ve been able to convert much of that shame into something creative.

You’re a multi faceted artist with plenty of tricks and talents up your sleeves, have you any other gifts that we don’t know about?

Ha! Ok yeah as a kid I was a champion motocross racer in New England. And although I’m a terrible cook, I do make killer pancakes.

How would you describe what it is that you do?

I say it’s like smuggling lightness. I try to tap into flows that run deep…from generations before me…originating from the sea. That is why some of my movements have a liquid feel to them. We come from water and we are made of mostly water. Life on dry land has hardened us up over time…that’s what ageing is! 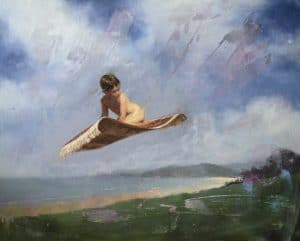 Would you say that you are your own art? How has movement and dance contributed to your existence?

I like to blur the lines between the studio and life…to be the art as opposed to making it. I have always been physically playful. I came from an era where health and safety wasn’t such a ‘thing’. It was the period when trampolines had no nets and playgrounds were made on hard concrete. We would hop on the back of subway trains (on the coupler) and hold on for dear life. The streets were our playgrounds, we didn’t have skateparks or bike lanes. I think I am still very much that kid, playing in the streets.

The human body is much smarter than the mind. Even those with the lowest IQ can still make another human being. The greatest minds in science can’t come close to replicating what we do naturally. So I place a lot of faith in somatic wisdom. Movement for me is less about dance and more about ritual. I get a lot of inspiration from Sufism who use repetitive motions as form of prayer. So I look for my own patterns and try not to filter too much…to turn it into an active meditation. 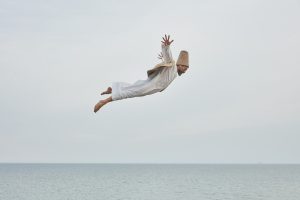 What is it about Brighton that made you want to live here?

I use to visit of a kid, because it’s the birthplace of my mother. I love it here. There is has a creative charge…also I like the weather here. The wind owns this town, things are always blowing around and I find inspiration in that. that concept of lift. It’s turned me into a good kitesurfer.

Do you have any shows coming up?

Yes, ‘Lightness of Being’ a collaboration with photographer Hugh Fox. Venue still to be decided.

How did your collaboration with photographer Hugh Fox come about?

I met Hugh through mutual friends and about 5 years ago we hired him to photograph our family in my art studio where we dressed like characters from 1001 Nights. Hugh has a very easy going nature about him and our process is very organic… we just let ideas present themselves. We always laugh at how little time our shoots take. It’s important that they take place outside because it’s a lot about how the public react, or don’t react, like a cultural study on behaviour.

Your Instagram account has a pretty spiritual feel to it which is unusual in the digital age. It projects an interesting portfolio of work which feels inspiring and thought provoking. Social media has ‘devil at the crossroads’ temptation, do you agree and how do you maintain a real life/social media balance?

I try to use it the way I would use a sketch book. And like a sketch book it is important to test ideas out and push them further, even if it turns out not so great. I’m ok with losing followers. it’s better than being safe. Also I try not to spend more than 20 min a day on social media. Fortunately my eyes don’t like looking at screens anyway.

Item would be My JBL Speaker. Food-Cheese Pizza (well done) from Pinos in Boston, MA. Person Leyla. Book “Zen and the Art of Motorcycle Maintenance.”

There is plenty of safe and pleasant art out there. How important to you that your work discusses the political climate and would you say that it’s the job of an artist to educate?

I am very inspired by Edward Said. He talks about notions of ‘Orientalism’ and how the West views the Middle East through a very purposely distorted lens. Much of my art and my aesthetic is about ‘co-existence’. In my case, I am straddling two very politically opposed cultures. This concept of celebrating the differences, and respecting each other’s values seem more important now than ever. We are all just tourists here anyway. 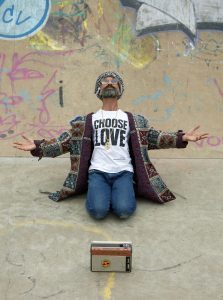 I often dream of flying on carpets then I wake up next to a Persian Princess. I do some yoga in the shower before the kids wake up. then it’s all Oatabix and shouting.

I go every morning to my studio, my ‘cosmic gym’ and start painting. My studio has two halves, one half for painting the half for movement. I usually stop painting around 11:30 and face the easel away from me. I then do movement work to music, which includes inversions and many unorthodox forms of healing inflammation. to allow my body to stay fluid.

By 2 pm I am ready to look at my morning’s painting again. I am a much more lucid version of myself after the movement work and can often finish the days work with a few chosen marks.

If it’s still sunny I put on my headphones and try to get in some rollerskating by the seaside before collecting my boys from school.

I haven’t been lucky enough to see you on your magic carpet around Brighton yet. Can you tell us what is behind the concept of this? What’s the response from fellow Brightonians?

It’s always been a childhood fantasy to fly like Aladdin. I think many of the things I do are echo of this fantasy, some more literal than others. Even when I am painting I look for shapes and lines that have sweeping rides. It’s important that my work has a quality of freedom to it, regardless of what medium I am using. Brightonian’s usually get it, dogs not so much.

Have you any advice for the unrecognised, gifted and broke artists out there?

Don’t hang on to things so tightly. We are all just flying through space on a rock anyway. As Ekhart Tolle say. ’Life isn’t as serious as the mind makes it out to be.”