Home Food “This is our form of activism”: Everything you need to know about... 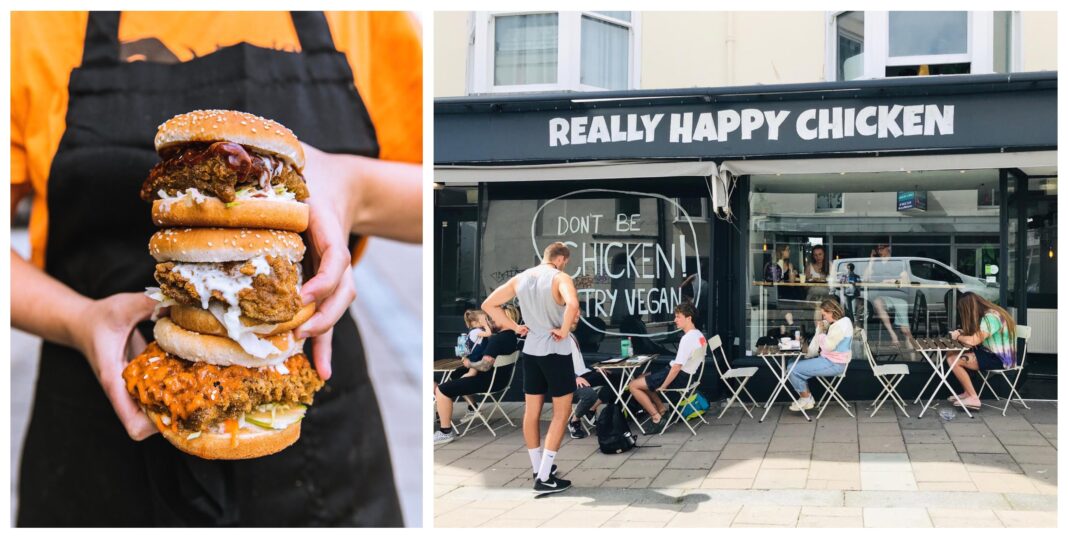 This week, I had the pleasure of visiting Brighton & Hove’s brand new vegan hotspot – Really Happy Chicken on Preston Street. Not only do they serve delicious vegan fried chicken, they’re also passionate about innovation and activism.

The more you learn about this place, the more you will be fascinated by its story, and it won’t be long before you’re dying to sink your teeth into one of their delicious seitan creations.

I spoke with founder, Owais Amiri, about how the brand started, his opinion on Eat Out to Help Out, how meat eaters respond to his food, what it’s like being a vegan business in Brighton, and so much more…

How the Business Began

The first question I had for Owais was how he and his team came up with the idea for Really Happy Chicken. I had assumed such a successful business would have spent a lot of time in the planning stages, but as it turns out, the original idea for the space that is now Really Happy Chicken had nothing to do with vegan fried chicken at all:

It wasn’t an idea as such, to accurately put it, one thing led to another. I’m associated with a few vegan businesses in Brighton. I’m involved with Kindly, the supermarket on Seven Dials, and while everything was happening [Covid-19] we were doing the online side of things from this premises here [the building which is now Really Happy Chicken] and because we had access to the kitchen, we thought we could open up a donut shop. 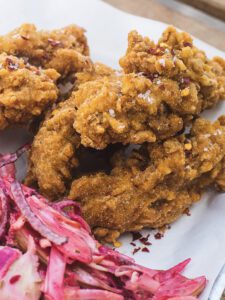 The donut shop is something we intend to do in the future but while we were doing that we thought “let’s do some savoury donuts” and we made seitan chicken one day as an experiment and it just really stuck well. So, the donut business went to the back-burner and in came the chicken.

Only eight weeks on from that first taster, Really Happy Chicken opened its doors.

The development of their seitan’s flavours and texture was an ongoing process, and Owais explained why the word  “vegan” added extra pressure on him to create the perfect product:

I think when you put the word vegan on the banner, people just judge you a bit more than they would judge another business. If next door was a sleepy fried chicken shop, people would still go in there, pay the money, walk out, grudge a little bit, and still eat whatever is given, but as soon as you put the word “vegan”, the expectations are just up there.

So, for me, I didn’t want to take the word vegan for granted, and wanted to really make sure I put a product out there that’s right and that people rave about and enjoy, and almost sort of compare it to KFC and say “this is just as great!”

Owais shared how their opening day blew the entire team’s expectations out of the water tenfold, and how they have adapted to the high demand: 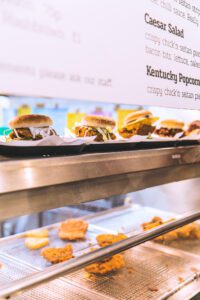 We thought it was going to be a tiny operation so we put up a wall and didn’t even open the other half of the business because we purposely thought it was going to be a very tiny thing, a very niche thing that people would try, but the day we opened the door…. We sold out within 5 or 6 hours of opening – we just didn’t know how to sell properly and how to cook this much and we didn’t have employees who could give us a hand with all of this.

The first couple of days was all hands on deck, I rang every friend I knew and said can you just give me a hand. We started out with 5 or 6 employees and today we have 17 and we’re hiring still. The team has expanded, we bought new equipment to keep up with the demand, we started putting in shifts at 5am to prepare in time for 11:30am.

With so many meat substitutes available now, especially for chicken, there are a plethora of ways this team could’ve created their version of vegan fried chicken. Owais shared why seitan was the obvious choice for his business: 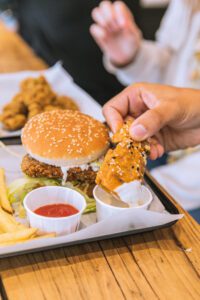 We wanted a product we could make ourselves. I think people could buy pea protein pre-made, This Isn’t Chicken, or other brands of chicken products on the market. This may sound slightly cocky, but I believed our seitan had room for innovation, and I didn’t think other products out there on the market matched what we wanted as our product.

It’s not just any old seitan, the team is constantly working on the product to make it as enjoyable as possible:

We’ve innovated when it comes to our seitan as well – we mixed it with beans and a few other ingredients to make it a bit lighter as compared to traditional seitan found on the market.

We felt seitan could be recreated a lot closer to KFC and that was our drive – we wanted to be a vegan KFC. 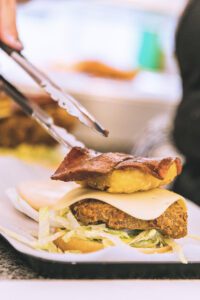 While their core audience is, of course, vegans, the aim is also to impress meat eaters and those moving towards a more planet conscious lifestyle:

We do get a lot of meat eaters in that are curious to try. In fact, we’ve had some great reviews from meat eaters who say “oh my god this is incredible!”, but at the same time there are some meat eaters that will walk into a vegan place knowing that they’re not going to like it.

We can’t wait to introduce a try before you buy scheme for meat eaters where you come in and try a piece of popcorn chicken and if you like it then buy it and if not you’re more than welcome to walk away.

This is our form of activism. I believe that every meal sold to a non-vegan is an animal life saved.

Not just me, truly the whole team believes in it, and we’re really passionate about making sure that we get more vegan curious and meat eaters to come in and try our food, and hopefully they come back for it.

The business has been consistently busy since its opening one month ago today, so I asked if this was the type of response they were expecting to receive: 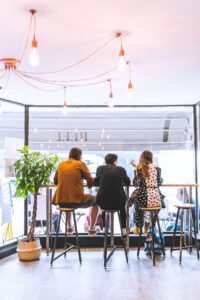 No, if I had I wouldn’t have stupidly invested money in dividing the two shops. I divided the two shops, just about got minimal furniture, was shit scared, had just four employees from other businesses giving me a hand. Had we known this is what vegans were going to be like, and the amount of love and response we got, I mean it’s phenomenal.

People from up and down the country have been raving about Really Happy Chicken, which both excites and scares Owais:

I keep pushing my team to give the best every. single. time.

I’m not a restauranteur at all, I’d never been in this business as of a month ago, so it’s all a learning curve for me. 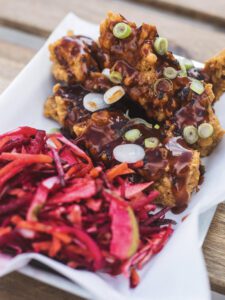 I don’t see this as a competition at all. I think there are 25 other businesses like us that could come to Brighton and not impact any of the other vegan places. Brighton is densely populated by vegans, vegan curious people, and people who are trying to be planet conscious, so I think the market’s there, and I think there aren’t enough businesses. If you’re not lazy about the product, you’re not lazy about the service, there’s room for plenty of players.

He also shared what his relationship is like with other vegan businesses in the city:

I genuinely believe every vegan business in Brighton is a fellow compatriot for me as compared to a competitor, I think we’re coconspirators, rather than people who want to keep putting each other out of business. I’ve reached out to other vegan businesses and asked them a bunch of stuff, and they very happily answered my questions.

Eat Out to Help Out

When it comes to the Eat Out to Help Out scheme, Owais isn’t sure how to feel about the ways it impacted his business:

I have a… probably strange opinion of Eat Out to Help Out. We’ve had equally good days on a Saturday and a Sunday when people paid full price for it, so we wouldn’t say that sales wise we took less on other days because of Eat Out To Help Out. Our product did stand that ground. 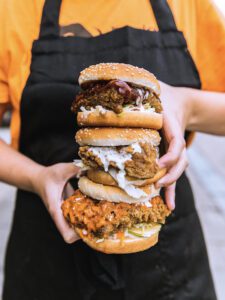 He explained how this is helped by their reasonable prices, with a starting burger available for just £6.45 and chips for less than £2.

While the scheme may have brought in more customers, it also put a lot of pressure on the budding business in its earliest stages:

My thing is that it’s probably provided us with an unreasonable amount of pressure on us as a business to certainly put more staff in place, more equipment in place, longer waiting times, all concentrated into three days.

It took a while for the business to become available on delivery services because the high demand meant their team and the third party drivers couldn’t keep up, but they have a plan to fix this:

Sometimes the food will sit there for 20 minutes and the drivers don’t come. So, we want to try and have our own fleet of drivers so we can get our food out in the best possible form to our customers. I just want to make sure that pressure is maintained on delivering the best and not anything less.

Really Happy Chicken also offers milkshakes which are not yet available for delivery, but Owais promised they will be in the near future.

As for menu changes, Owais would rather contract it than expand it, but there are a few items he’s willing to add: 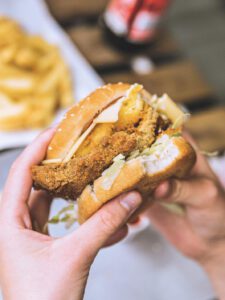 I asked whether there would be more Really Happy Chicken shops popping up in the future, and while the menu is unlikely to expand much, the same cannot be said for the business itself:

Yes, totally. I think if this form of activism is working, then hell yeah! The proof lies in the numbers, and let’s get out there – within Brighton and outside as well. We’re actually actively looking for our next site. It might sound risky and stupid one month in, but I think the signs are great. The demand is there. I think other geographies will enjoy this product as well, but for me, I’m obsessed about quality, so until I have that factor locked in, I’d be very skeptical about expanding.

I just want my product to be 10/10 every time, no matter when or how you eat it.

For more information or to get in touch, head to Really Happy Chicken’s website, and/or their social media pages:

Or visit them at 31 Preston St, Brighton BN1 2HP

How “BookTok’ is taking over the world of reading