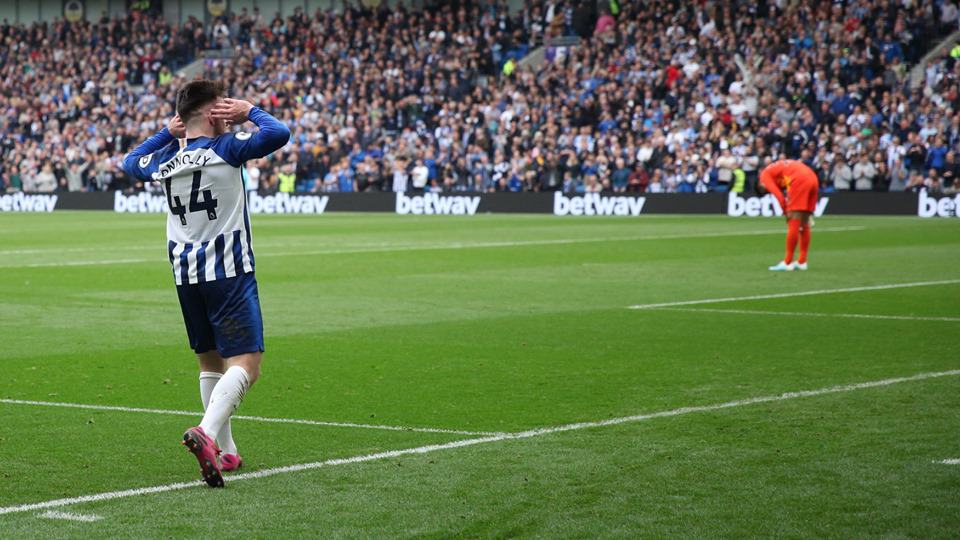 Brighton faced Tottenham at home this weekend with both teams desperately needing a win. The Seagulls were yet to win at home this season whilst Tottenham were on the back of a devastating 7-2 loss to Bayern Munich in the Champions League. Graham Potter deicided to keep to his usual three at the back for this match accompanied by two wing backs, three in central midfield and two up front, giving Aaron Connolly his first start in the Premier League.

Brighton came out all gun blazing, passing the ball nicely around the midfield, and it soon payed off as Pascal Gross delivered a dangerous ball into the box and looked to be heading straight into the top right corner of the goal. Hugo Lloris, who started in goal for Tottenham, seemed to be caught a bit off guard as he jumped backwards in an attempt to catch the ball. In doing so he dropped the cross right into the path of Neal Maupay who headed the ball home in what was his easiest finish for the Seagulls yet.

Lloris looked to be in instant discomfort as it was quite evident from the replay that he had landed awkwardly on his arm, twisting it back in what would later be discovered as a dislocated elbow. This forced Mauricio Pochettino into the first substition of the game, bringing on their reserve goalkeeper Paulo Gazziniga for the injured Lloris.

Whilst it could have been tempting for Brighton to hold back and defend their lead, Potter’s side continued to press high up the pitch searching for a second. The Seagulls looked especially dangerous down the left flank with Aaron Mooy and Dan Burn linking up nicely.

Mooy would later play Burn down the wing and managed to produce a delightful low cross from a tight spot into the box, falling in-between the Spurs centre-back and full-back and finding Connolly. The young Irish striker produced a clever flick forcing a save from Gazzaniga who could only push it back in front of the Brighton striker who finished comfortably for his first Premier League goal.

And it continued to be one-way traffic for the Seagulls into the second half with Aaron Moor cleverly placing his body between Moussa Sissoko and the ball drawing a foul from the Spurs player. Up stepped Pascal Gross who fromt a very tight angle to the left of the penalty box fired in a superb effort on goal, catching Gazzinga by surprise hitting the crossbar before bouncing over for a goal kick.

Towards the end of the game Tottenham started to create a few chances afer bringing on the Brazillian Lucas Moura, but Matty Ryan was strong in goal, who after being fairly unactive throughout the game, produced two fine saves. Firstly, he closed down Moura following a dancing run through the Brighton defence, blocking the Brazillians shot with his chest. Following that Ryan made a tremendous save down to his left after Moura’s venomous shot seemed goalbound for the bottom corner, but Ryan got a strong hand to the ball keeping it out.

Overall this was an outstanding result for the Seagulls and one of the best perfromances I have seen from a Brighton side for a long time. It seems that Potter’s system has started to settle in and his emphasise on giving young players the chance to break into the first team is paying off. Aaron Connolly had a sublime game and looks extremely confident and useulf with the ball at his feet. Steven Alzate is another who has impressed many fans since coming into the first team. It will certainly be interesting to see what Potter does with the immenent return of Leandro Trossard and Davy Propper as he will certainly have some tough decisions to make in the future.