Do you recognise this man getting off the No 2 bus in Brighton? 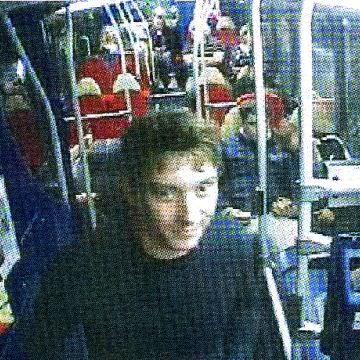 Detectives investigating the reported rape of a 24-year-old local woman in Shoreham are seeking a man seen on a bus going into Brighton with her on the same evening.
The man in the picture was on a No 2 bus between Shoreham and Brighton, with the woman, and he is seen getting off in Western Road, Brighton, near Deichmanns, just after 9pm on the evening of Friday 11 August.
He is described as white, aged about 30, wearing a blue fleece and a tracksuit with red stripes.
They had both boarded the bus in Shoreham High Street outside the Co-Op and sat in the back of the top deck in the left hand corner. The man was kissing and hugging her while she looked quite uncomfortable.
The woman subsequently reported having been raped in an alleyway off Eastern Avenue, Shoreham, earlier the same evening.
Detective Constable Sapna Patel of the West Sussex Safeguarding Investigations Unit said; “The woman is being given expert support and counselling while we continue to investigate.
“If you recognise this man, or if you can help with other information, please contact us onlineor by calling 101, quoting serial 1577 of 11/08″.