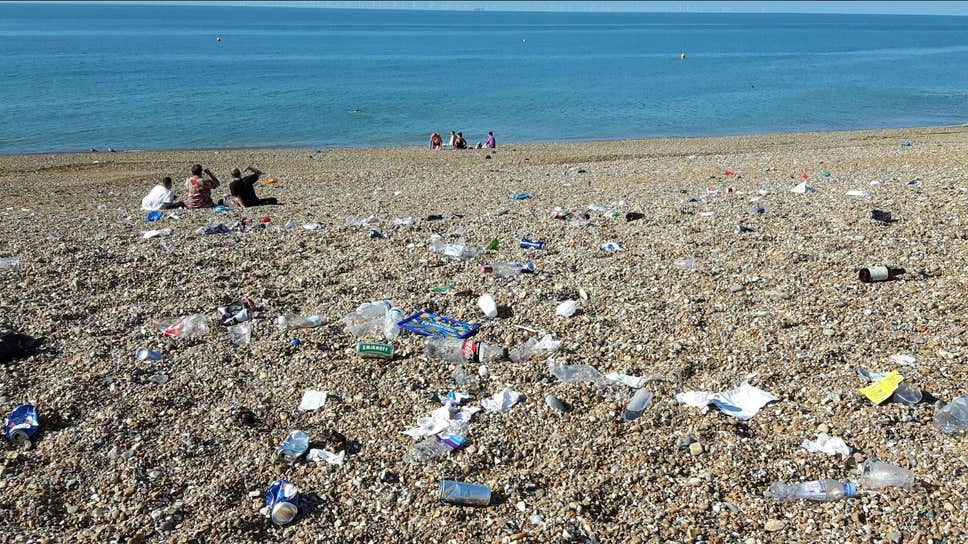 Brighton Greens have labelled the dramatic increase in seafront litter a ‘disgrace,’ more than two years on from Brighton and Hove Council’s Council’s single-use plastic pledge. They have called for immediate action and a ‘polluter pays’ approach to address the sudden surge in takeaway litter and overflowing bins on the beach.

Greens have called for immediate action on beach litter as plastic waste and takeaway containers increasingly blight the seafront, condemning a council pledge to reduce single-use plastic waste as an ‘emerging failure.’

Condemning slow progress on litter in the city, Greens say a ‘business as usual’ approach is no longer an option, as an increasing number of food outlets move to takeaway-only in response to Covid-19. The closure of restaurants has resulted in more people eating and drinking on the beach.

Urging Brighton’s Labour Council to focus more attention and resources to the seafront, Greens say bolder action will be needed to truly address the problem of plastic waste washing in to the sea.

In November 2017 the council signed up to a ‘plastic free pledge,’ and later adopted a ‘single use plastics policy,’ which committed the council to use government legislation, enforcement and better communications campaigns to prevent single-use plastic waste ending up in the sea.

However, Greens say images of overflowing bins and plastic waste littering the seafront prove that the Council have neglected to take fast enough action on plastic waste, despite having the power to address littering and a pledge to work with local traders to reduce waste at source.

Pointing to offers of support from local campaigners and marine conservation group Surfers Against Sewage, Greens are calling on the Council to develop a stronger response to littering on the seafront, including lobbying businesses such as McDonalds who generate plastic waste to contribute to clean-up efforts.

Referring to a recent public call for people to join the City Clean waste collection team, Greens also want to see the Council explore the option of a dedicated seafront litter enforcement team, as well as to swiftly divert more resources and signage to the seafront waste effort.

“Two weeks ago, Greens warned city councillors and officials that with lockdown lifting and the weather warming, people would congregate on our beach – and inaction on the resulting litter has gone on long enough.

“Despite Labour putting in place a plan over two years ago to tackle waste, we still don’t see results. There is no question some of this is about behaviour change. But immediately we need to address the issue of overflowing seafront bins. The council needs to take decisive action now and use the powers it has more effectively – more patrols, enforcement and fines.

“We also won’t get far without businesses stepping in to reduce plastic usage and contribute to keeping the city clean. For example, McDonald’s has re-opened its drive through restaurants this week- how are they going to prevent their waste clogging our sea, beaches and parks? And what will they do to reduce litter in the first place? If companies can’t keep our seafront tidy they need to pay for the pollution they are causing.

“Back in 2017, on the back of a very prominent public campaign Green Councillors urged the city Council to ‘go plastic free’. Today we repeat this call: to visitors, residents and traders alike. Take your litter away from our beach and reduce the damage plastic waste is causing the environment and public health. Our sea and beach are beautiful – but they are incredibly fragile. If recovery from the pandemic wasn’t enough, we are now having to deal with a heavily littered seafront every single day.”