Bees in Brighton: What to Do When You See a Swarm 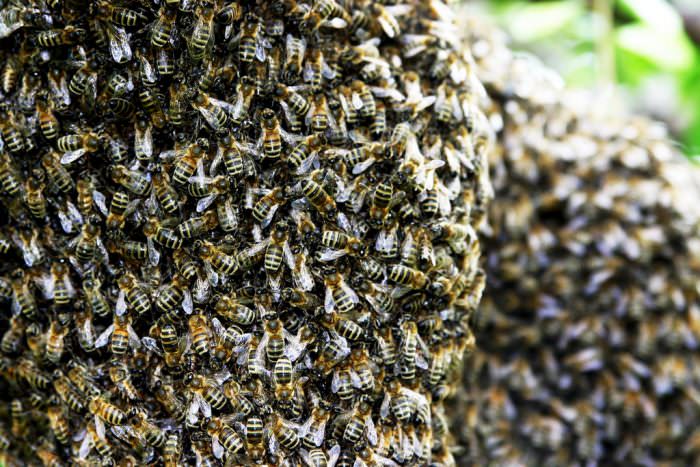 As we were scrolling through the many Brighton Facebook groups yesterday, we spotted some pictures of bee swarms popping up all around Brighton & Hove. It is now the season for honey bees to swarm as they wake up from winter and begin to get busy again. We’re here today to tell why it happens and what to do if you see a swarm approaching! 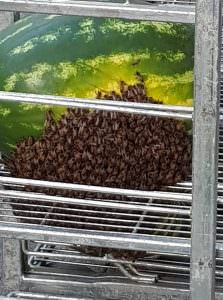 Throughout the cold winter months, honey bees huddle together in a group of around 10,000 to 20,000 bees to keep warm and alive in a ‘winter cluster’. As the weather gets warmer the colony begins to expand again. The bee colony grows to around 50,000 worker bees working extra hard to re-build their home. The worker bees regulate the hive temperature, guard their colony, tend to the growing brood of baby bees, and create wax, comb and honey. They also help to create as much food as possible and feed each other to gain nutrients. They act as a super-organism, a unit that has to work together as a whole in order to function.

When honey bees eat, they transmit a pheromone from one to the other which enables them to communicate with each other. It is with this communication that honey bees know how and what to do in their colony. The ‘Queen Pheromone’ is produced by, you guessed it, the queen and it is her pheromone that encourages the worker bees to keep working for her. The queen encourages the workers to build the comb and forage for nectar. It is important  to note that without the queen’s pheromones and signals, honey bees very quickly begin to create a new queen bee. Within 15 minutes of a queen being removed from a hive or colony, the bees will frantically begin to create a replacement. 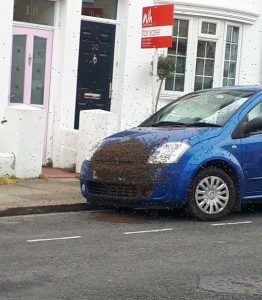 Once the colony has grown, some of the working honey bees can no longer detect the queen’s pheromone. This initiates bee swarms. When a bee can not sense the pheromone anymore, the queen becomes non-existent. A colony cannot have two queens so before a new queen emerges, the old queen takes flight with part of her colony to establish a new nest. They gorge themselves on nectar and set off to create a new home.

Once the swarm has left, they begin to create a swirling mass in the air or will settle in a place for the queen to rest. The honey bees gather around their queen and as she is not a strong flier when you see them, such as in Brighton, on fruit and cars there will be scout bees looking nearby for an appropriate place to set up home. A swarm may stay for a few days but are more likely, in an urban environment, to stick around for a couple of hours before moving on.

Do find a local beekeeper or beekeeping association to help you! Most in the local area have Facebook pages and are very easy to find. It is best to find a beekeeper as they will look after the bees in a hive and care for them.

Do leave them alone if they are in a location that does not effect you. Bees are wonderful and under threat, if they pose no harm or inconvenience to you…let them bee.

Do not use any chemicals or pesticides near them. If you have to contact a local authority as a last stop option, make sure they do not use any form of extermination either. The bees should only be destroyed if the swarm has rested in a wall cavity, chimney or a location similar.

Do not throw anything at the hive. Bees are very friendly and often docile but if you aggravate them, they may sting you or attack in a swarm.

Locally, people are mainly advising residents to contact Shane Rears, a local Brighton bee keeper or to contact ‘The Bee Lady’, a local woman who collects bees for their honey and in return gives out free pots to hay-fever sufferers and children with cancer to increase their white blood cell count. There are other local services available too such as:

Rock Up for Surfers Against Sewage