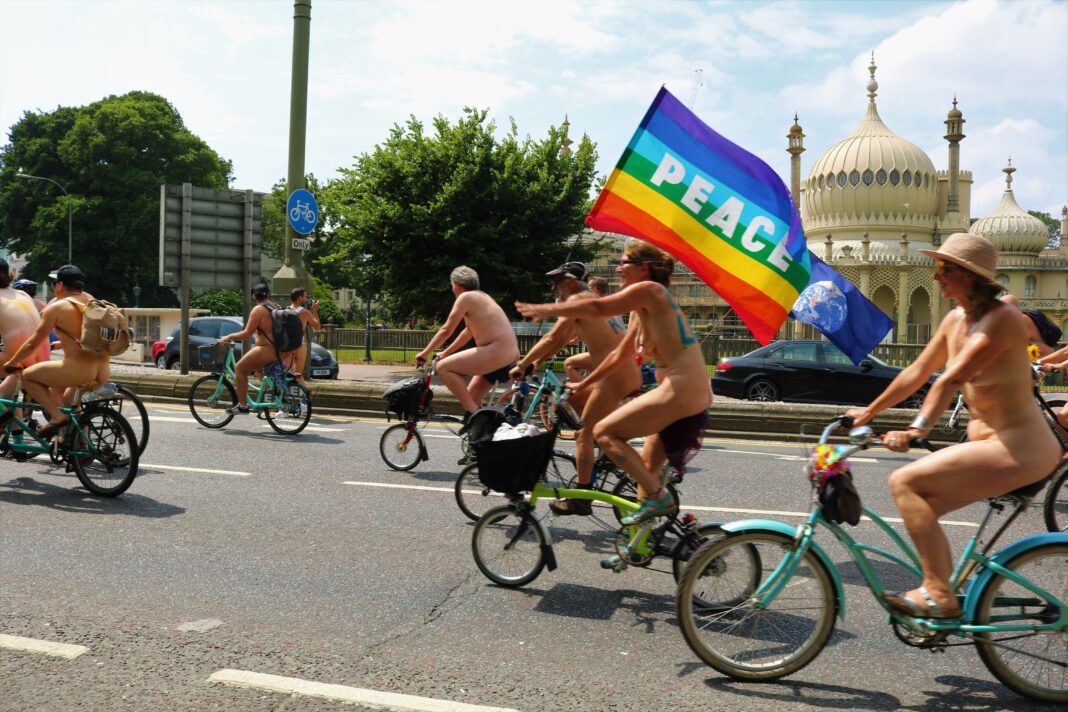 This year, Brighton’s Naked Bike Ride will be joining with Extinction Rebellion under the banner “We are Nature!”

Two environmental campaign groups in Brighton, Naked Bike Ride and Extinction Rebellion Brighton, are uniting in their shared mission to alert the world about the climate change crisis, which is getting increasingly worse.

Extinction Rebellion have been staging a series of creative actions around the country including the recent radical sit down protests in central London. In Brighton, Extinction Rebellion staged a mass “die-in” in Churchill Square, to raise awareness about the urgency of the environmental crisis and to encourage people to take action.

We’re not just campaigning about the extinction of global animal and plant species,
but about the potential extinction of human beings due to man-made
pollution and climate change. We are part of nature, and thus equally
vulnerable to the environmental crisis we have caused. We’re joining
this ride, and supporting the event, as a powerful symbol of both our
vulnerability to pollution and our power to change it.

Brighton Naked Bike Ride is supporting the cause, also urging the government to “tell the truth about climate change and re-think policies”. Duncan Blinkhorn, who is a ride organiser, has said:

Moving to a future that is safe from climate chaos requires us to make better use of the Earth’s limited resources, and stop pumping carbon into the atmosphere. World Naked Bike Ride demonstrates that less can be more: less consumption, less pollution, less clothes even! With just bikes and body power, we are campaigning for better road safety, a more stable climate, cleaner air and… more fun!”

The bike ride will be taking place on Sunday the 9th of June, from 11 am. It is starting at Preston Park Brighton, where riders will have the chance to decorate their bikes and bodies before they set off at 1.30 pm. Blasting out feel-good music on numerous sound-systems, the cyclists will travel along the seafront via Brighton Palace Pier, back down Western Road, through the Lanes, North Laine, and Kemptown, before finishing at Black Rock naturist beach.

Participation is family friendly, free and “as bare as you dare.” For more information, click here.