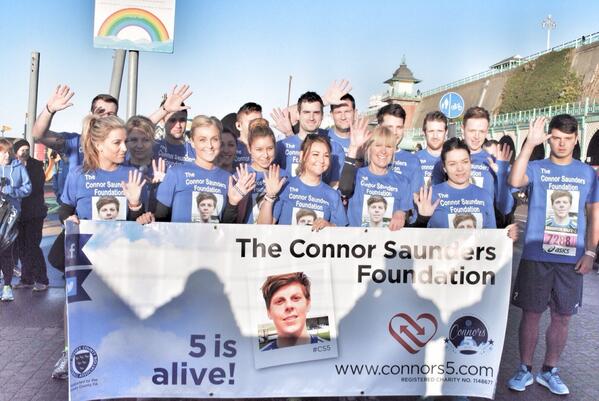 A running army of ten who call themselves ‘Connor’s soldiers’ are running in memory of their football-loving friend at this weekend’s Brighton Half Marathon.

The group are running for the Connor Saunders Foundation, a charity bringing football coaching to children with disabilities or learning difficulties which mean they can not go to mainstream football clubs. The foundation also donates defibrillators to sports clubs, schools, and public spaces in a bid to save lives. It will mark its 5th anniversary this April by donating the 50th defibrillator.

Courtney Lewis, Connor’s friend who has previously run two half marathons in aid of the foundation, said: “I think he would think it was amazing, he would’ve probably wanted to run a half marathon himself so I imagine this would be something he’d be proud of.”

“The last two times I did it I trained it quite a lot and this time I haven’t been able to train as much, so I am a little anxious.”

“A lot of people around the community are so proud of the foundation and so many people are involved, it’s just got bigger and bigger. It’s an amazing charity.”

Connor tragically lost his life after being assaulted on a night out in 2012. He was just 19 at the time. The keen footballer who played for local side Peacehaven and Telscombe was described by his mother Darran as “too good for this Earth”.  Among his closest friends was X-Factor contestant Frankie Cocozza who was a pall-bearer at his funeral which united a crowd of more than 200 people.

Connor’s Soldiers will be put through their paces from 9 am this Sunday as they run a gruelling 21-kilometre route through Brighton and Hove, along with thousands of other runners.