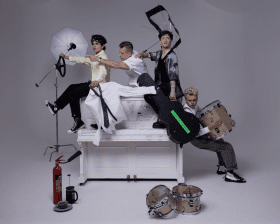 – They have generated over 6 billion streams and…

– Over two billion views on the bands YouTube channel alone

– They’ve created their own festival – The Vamps Weekender in Barcelona – They’ve drunk shots with Dave Grohl backstage, hung out with Sean Paul at Woodstock, been held at gunpoint at airports, played for royalty (and put hot drinks on priceless tables and carried muddy football boots through their houses!) – There’s also been ice skating competitions, jungles, driving lessons and dating shows!

Kicking off in Manchester at the O2 Apollo on 23 November, the 10 Years Of The Vamps – The Greatest Hits Tour will see the band perform all the hits from across the decade that has made them become one of the most loved and celebrated pop bands in the UK.

They will come to the  Brighton Centre Friday 25 November

Tickets are on sale from 1 July at www.thevamps.net/dates/

10 Years Of The Vamps – The Greatest Hits Tour