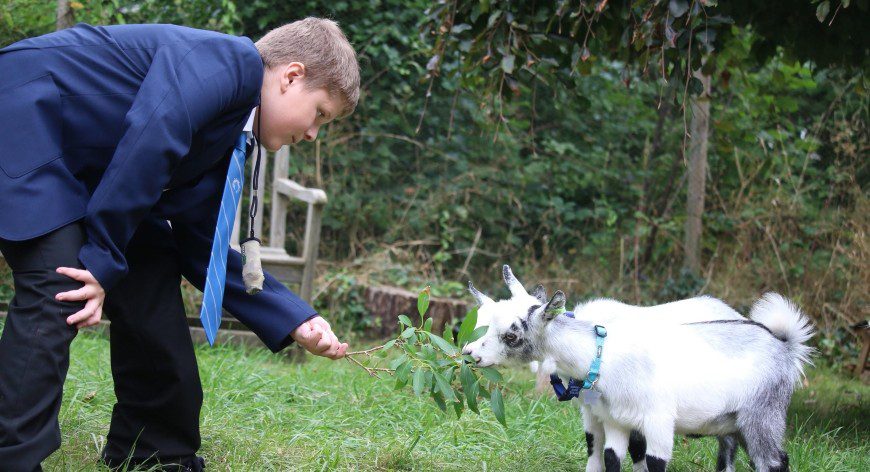 Sports day, school discos, and adventure playgrounds are all standard fixtures at any school in England. But Varndean School in Hollingbury has an unlikely addition – five kids who are down with the kids.

The Varndean School goats have come a long way from being humble grass cutters, and have now featured on ITV, BBC South East, and Good Morning Britain. They are so hip they even have their own Twitter account.

Hilary Goldsmith, the school’s finance director, brought the goats to the school in September from her previous workplace. They have settled in very well and become a fun, mindful addition to the school community. Ms Goldsmith said the addition of the animals has caused a huge positive change in pupil behaviour and encouraged students to engage more.

The adorable pygmy goats are named after each of the school’s four namesakes; Maya Angelou, Bertrand Russell, Alan Turing and Ethel Ellis. The fifth goat, William, shares his name with headteacher William Deighan.

There is now a lunchtime ‘goat club’ every day, which sees more than 100 students and staff flock to spend some quality time feeding, petting, and walking the goats. Goat club teaches children how to take good care of the animals and gives stressed pupils and staff some much-needed downtime.

A spokesperson for the school says Varndean firmly believes in the power of animal therapy for supporting students during stressful times, adding “the power of nurture is a proven tool in the practice of mindfulness and wellbeing.”

Mr Deighan said the goats give pupils a chance to experience compassion, empathy, and teamwork – all invaluable skills which compliment the curriculum.

“The goats are great fun to be around and the kids find them very entertaining,” he added.

Pupils have also used the goats as a link to other subjects: there is goat artwork, stories and one student even conducted an experiment to see which food was their favourite.

Teams of pupils are now training the goats for a Red Nose Day Race in aid of Comic Relief. The sporting event will see the five goats, mentored by students from their namesake school, go head to head on the school field on 24 March.

Melanie Thomas, the school’s marketing and communications officer, said: “We are incredibly proud of our history of charity work at Varndean School and involving our newest members really helps to highlight the fun in fundraising!”

Watch the goats in action here:

In conversation with Amy Goble of calligraphy business The Amyverse