Home Sports Albion Must Take Control and Pass On the Pressure 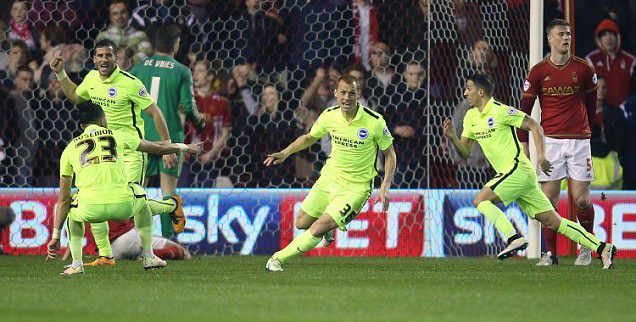 Brighton & Hove Albion’s fate is still in their own hands, thanks to Steve Sidwell’s stoppage-time goal at Nottingham Forest on Monday night, but with five games to go and a hat-trick of very winnable games next up, Chris Hughton’s side must set the pace in the automatic promotion race.

Consecutive away wins at Birmingham City and the County Ground were big strides taken by the Seagulls, closing the gap to two points off second-placed Burnley, who fell from the summit following Adam Forshaw’s 94th-minute winner for Middlesbrough on Tuesday evening.

Albion star in the next instalment on Friday evening, as Fulham travel south to visit the Amex Stadium and Hughton’s third-placed team can once again leapfrog their rivals onto the Premier League launch pad.

A win for Albion will move them into second position, completing Burnley’s slip from table toppers to play-off frontrunners without playing a game. Pressure can do strange things when cranked to full volume and three points for the Seagulls before the weekend will shift the weight back onto Burnley and Middlesbrough, who travel to Birmingham and Bolton Wanderers respectively.

In fact, Burnley could be left staring down the barrel come 3pm on Saturday, as Boro’s lunchtime trip to the Macron Stadium could leave the Lancashire club five points behind the leaders with Aitor Karanka’s team visiting Turf Moor just a few days later.

No matter the score in that game, it’s guaranteed that points will be dropped by at least one of Albion’s rivals, if not both. Queens Park Rangers visit the Amex on the same night and if Hughton’s team are to take full advantage of the situation, nothing less than a win will suffice on a huge night that promises a late knock-down.

With 18 of Albion’s 21 league victories coming by a single-goal margin, it’s hard to argue with Hughton’s well-constructed approach to defending slender leads. Not a single loss has been recorded when taking the lead, which is a credit to Hughton’s resolute management style, but on the flip side, at this stage of the season a draw can feel like a loss and Albion have given up a collection of two-point hauls already.

Leads were squandered in all eight of Albion’s score draws this season, bar the 1-1 encounter with Cardiff City in October. Late goals to Bolton, Burnley, Derby and QPR were suffered, surrendering eight points that would now see Albion sitting pretty at the top of the league.

Of course, Sidwell’s goal was a fine reminder of the Championship’s swings and roundabouts but with only a handful of games to go and the Premier League within touching distance, Albion cannot rely on forgiveness as they fight without regret and leave nothing behind.

Six points from the Amex will see them travel to Charlton Athletic not only on a wave of confidence, but better placed in the shake-up with fewer chances to fall. Their opponents that day will either be fighting for their lives or limping to the finish line after League One condemnation, meaning an unpredictable test could await at The Valley.

Albion’s penultimate game will be at home to near play-off certainties Derby County, before facing Middlesbrough on the final day of the season in a potential ‘winner takes all’ game at the Riverside Stadium.

Regardless of all the factors that may or may not lead to Albion gaining promotion to England’s top flight, Hughton’s team need to take another big step on Friday night before focusing on the following four. The Seagulls must take their chance to get in front, or risk falling behind as their Premier League destiny falls from their grasp.