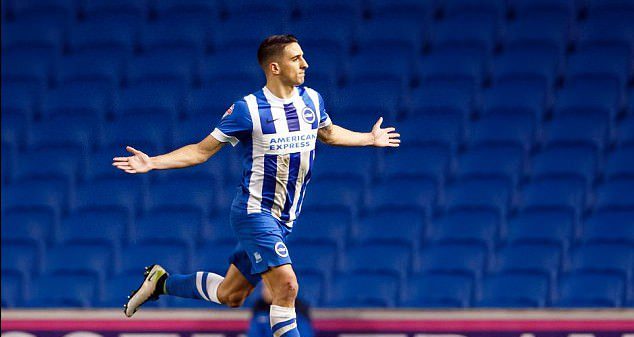 Brighton & Hove Albion recorded thumping wins over Fulham and Queens Park Rangers within the space of five days, narrowing the goal-difference gap between themselves and their two closest rivals, Burnley and Middlesbrough, to only four goals with three crucial games to play.

Albion began the weekend with a brutal 5-0 triumph at the Amex, as Chris Hughton’s men recovered from a slow opening against the Whites, before Tomer Hemed’s hat-trick, a rare goal for Bruno and a wonderful curling effort from Antony Knockaert rounded off an emphatic win.

Results over the weekend didn’t go in Albion’s favour, so they were back in action on Tuesday night with the same task in hand. Elsewhere, the league’s top two met at Turf Moor with Albion knowing at least one of their promotion rivals would drop points, if not both.

Another cagey start from Hughton’s third-placed team opened the contest but Knockaert’s delicate free-kick on the stroke of half time gave Albion the upper hand as the team’s went in at the break. And just like they did against Fulham, the Seagulls took control of the game, inflicting further punishment with three second-half goals to brush the Hoops aside 4-0.

Boro looked on course for all three points against the Clarets, but Michael Keane’s stoppage-time equaliser, a repeat of what he did at the Amex just a few weeks ago, levelled the game for Sean Dyche’s side and readjusted the league table once more with Albion still in third but closer to the pack.

Although Albion’s league position hasn’t altered following a 9-0 aggregate win over West London teams, two points now separate the top three in the Championship and Albion sit level on points with Burnley in third place. Perhaps more important though is the huge goal-difference swing that now sees Brighton within touching distance of a level playing field, with Albion currently sitting outside the top two because of a 4-goal deficit.

Another onslaught at Charlton Athletic this weekend could see Albion quash the gap, however a stoppage-time 1-0 victory would more than suffice at this pivotal stage of the season. But with Albion now joint-top goalscorers in the league, they will be expected to comfortably beat the Addicks, who were relegated during the week following a 0-0 draw with bottom side Bolton Wanderers.

Despite its ‘plain sailing’ appearance, Saturday’s fixture at the Valley shouldn’t be taken for granted, as Aitor Karanka’s Middlesbrough team found out at Bolton last weekend, a team who had performed woefully throughout the season but found a new lease of life once their League One fate was sealed.

Jordan Rhodes’ last-gasp header rescued his team from a shock result at the Macron Stadium and Albion must ensure they experience a more comfortable ride when they visit South London this weekend.

Albion have taken 19 points from a possible 21 with only one defeat in their previous 17 games. Nine points from their next three games will guarantee promotion to the Premier League and they are without a doubt the Championship’s form side at the moment. Hughton’s wise January business has propelled the Seagulls into action with a number of important goals in recent weeks coming from players who arrived in the most recent transfer window.

Steve Sidwell’s last-minute winner at Nottingham Forest saved two points that almost slipped from Albion’s grasp, Jiri Skalak is now level with Beram Kayal for assists this season, which is remarkable considering the small handful of games he has played and Knoackert’s three goals in a week, that included his nerve-calming opener against QPR, set Albion well on their way to maximum points at the Amex.

Albion’s impressive defence has recorded back-to-back clean sheets, with Lewis Dunk and Conor Goldson also contributing at the other end of the pitch, both scoring twice in Albion’s last four outings. Bruno notched a goal to add to his inclusion in the ‘Football League’s Team of the Season’ and Albion’s top goalscorer, Tomer Hemed recorded his first hat-trick for the club in a memorable week on the south coast.

Albion are riding a wave of confidence as they enter the final three games of the season, but the Championship is known for bursting bubbles. Chris Hughton’s men must get the job done at the Valley on Saturday, maintain the piercing momentum they currently have and move two steps from the Premier League with the ball still in their hands.