The UK’s largest bonfire festival has been plunged into a fresh blackface row after a photograph in a shop window showed a child “blacked-up” for a costume contest before a parade through the East Sussex town.

The boy had been dressed up by his mother who is a member of the Lewes Bonfire Society, for a pre-bonfire night celebration. The painting of his face sparked anger amongst many who saw him or the photo depicting blackface, after bonfire organisers agreed last year they would stop painting their faces black after claims it was discriminatory against Zulus. Over 1000 people signed a petition to end the insulting act in defence against misrepresenting cultural Zulu warriors.

Bonfire Against Racism is an activist group created in order to tackle the issue of blackface amongst other racist practices. A spokeswoman from the group stated: “To dress a child in total blackface is manipulative – both of the child and the potential audience. It feels like a deliberately provocative act.”

Blackface is more than just dark paint to enhance a costume

Many felt like the triumph from the petition to end blackface was a confident step in the right cultural direction for Lewes bonfire, and were greatly disheartened by the appearance of it in the run up to Bonfire night this coming Monday. Although the history of blackface is more historically associated with the origins of “minstrel shows” in America, many feel that the negative cultural implications of these shows which depicted African-American’s as inferior, appropriates black people as a target for mockery.

An ex Lewes resident took to Twitter to share views on previous bonfire night experiences as a child: 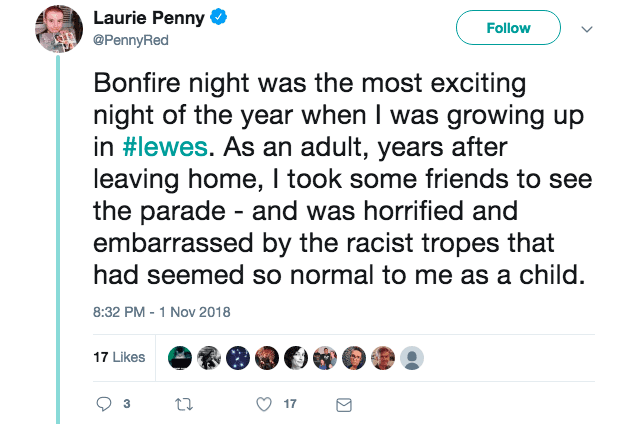 The practice of painting faces black has been a tradition for Lewes bonfire night since the Second World War.

Lewes Bonfire is the largest and most famous in the country, with some of the seven bonfire societies practicing traditions for over 150 years. Some participators felt like the banning of face and body painting defied the history of bonfire night. A petition created last year to defend the traditions of bonfire night collected 659 signatures. It stated: “We assert that nothing about the traditions of Bonfire encourages or incites these attitudes and defend the right of each society to self-determination”

Furthermore, Chairman of the Lewes Bonfire Society, Jason Winter, claimed the practice “commemorated the loss of the Zulus, not their massacre” and claimed that any opposition to the “blacking up” tradition is simply “a handful of do-gooders jumping on the racist bandwagon”.