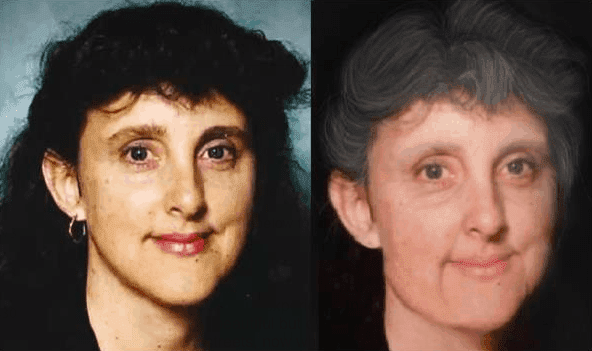 The investigation that has riveted Australia has reached Brighton… 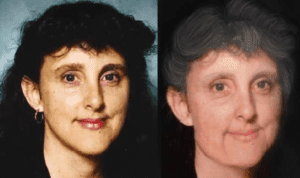 An Australian woman called Sally Leydon, has appealed to Brighton residents to help solve the mystery of her missing mother.

In 1997, Sally’s mum Marion abruptly left her job and family, heading alone to Europe from Australia. Marion told her daughter she was going on a long holiday, but failed to return.

On August 1st 1997, Sally spoke to her mother on the phone from the UK. Reception was patchy, but Marion told Sally she was in Tunbridge Wells, where she had enjoyed tea with some old ladies. Marion said she would call Sally back. That was the last time they spoke.

It would later emerge that one day after this conversation, Marion, or someone using her passport returned to Australia. Her name was changed to ‘Florabella Natalia Marion Remakel’, and thousands of dollars were siphoned from her account.

Sally reported her mother missing to New South Wales police, but the police failed to find any trace of her, and closed the investigation.

Interest in the case has been reignited after it was examined in hit true crime podcast The Lady Vanishes. Listeners were riveted by the peculiar details of the case. Marion left Australia abruptly, after resigning from the school where she had won the Queensland Teacher of Excellence Award the previous year. Marion was reportedly acting strangely in the months leading up to her disappearance. She suddenly asked her daughters’ to boyfriend to leave her house, for no obvious reason, and was also seen in a car with an unidentified man.

After 22 years, Marion’s case has been reopened in Australia. Now, Sally is hoping it will be reopened in the UK too.

“I would be so happy for the UK police, including Kent and Brighton to have my mum listed as missing and put on their missing person’s registry there. I am hoping they will be able to run my DNA against any Jane Doe’s in the UK once the NSW police send over a request”, Sally told the Brighton Journal. Sally is also hoping to receive help from the Luxembourg police.

However, a representative from the Sussex Police Force said there are currently no plans to reopen the investigation. “If the Australian authorities want to know anything, they will be in touch,” a spokesperson said.

In the meantime, Brighton locals can help search for Marion. Sally is appealing for people who might have information about visitors to Brighton in the summer of 1997.

One of the last traces of Marion is a postcard she sent from Brighton. “My mum visited this quaint little shop on her visit to Brighton and bought a postcard, which she sent to her aunts,” Sally said.

Social media has played a large part in uncovering new information about Marion’s case, and one local who has been involved in the case is an amateur sleuth called Kristina. Kristina, who does not wish to share her surname, was featured in the podcast after contacting Sally with helpful information. Kristina grew up in Worthing, and felt “moved to help in some way” after interacting with Sally through a Facebook group “Missing Person Marion Barter”.

Kristina has become instrumental in the search for Marion, and told Brighton Journal how locals can help.

“If residents know someone who owned or worked in shops, cafes, art galleries and hotels in the summer of 1997 they could pass along the missing poster to them. 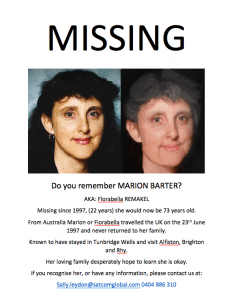 The Lanes are of particular interest because we know Marion bought the postcard from The Cat Shop on Prince Albert Street (now Amathus drinks)”, Kristina has said.

Kristina hopes there might be a resident who can answer one of the key questions of the investigation. “Are there any places that had guest books or visitor records and do these records still exist?”

Sally also hopes Brighton residents can help her find her mother. “It would be amazing if the residents of Brighton could pop the poster we have made for my mum around Brighton and the Rye areas, as this where our trail ends”.