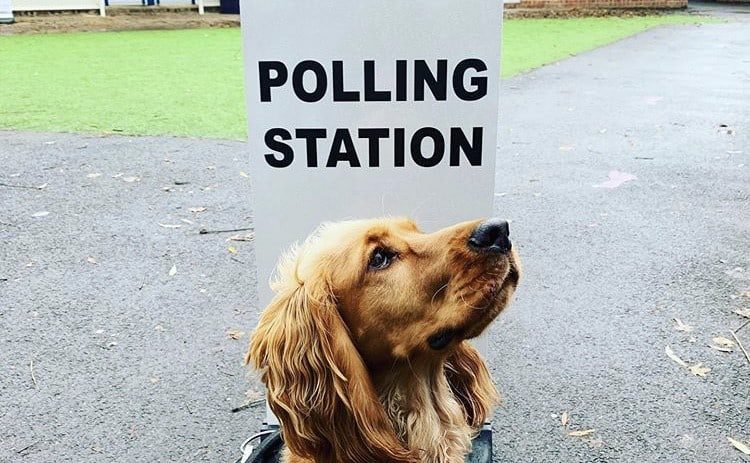 The day we have been waiting for has arrived and ballots are being pushed into voting boxes all over the UK. However, humans aren’t the only ones making their way to their local polling stations today, dogs are out in full force too.

In fact, the hashtag #dogsatpollingstations is trending all over the nation as owners share adorable pictures of their pups who have accompanied them to fulfil their civic duty.

This little one was so eager to have her owner’s voice heard that she managed to be the first canine companion at her polling station. We commend you, RB!

A sleepy eyed Skipper made it out to the polling station early this morning despite the rubbish weather. Good on you boy!

#dogsatpollingstations here I am, bright and early for Brighton! pic.twitter.com/xp17SWXWCU

What do Caroline Lucas, the park, and this pup’s lead have in common? They’re all Green! P.S. we’d get excited over seeing a puppy too, Arnie.

Here's Arnie, after voting for Caroline Lucas in Brighton. X nearly landed in wrong box after he spotted a puppy. #dogsatpollingstations pic.twitter.com/pZAu2S3iL9

Flo sucked up the nasty weather, popped a jumper on, and pulled out some cute poses outside her polling station this morning.

What’s black, white, and red all over? This Labour supporting dog out on voting day!

Get involved by posting a picture of your dog at your local polling station on Twitter with the hashtag #dogsatpollingstations. Even if you don’t have a pup to accompany you, make sure you get out and vote today to have your voice is heard in this important election. Every vote counts!