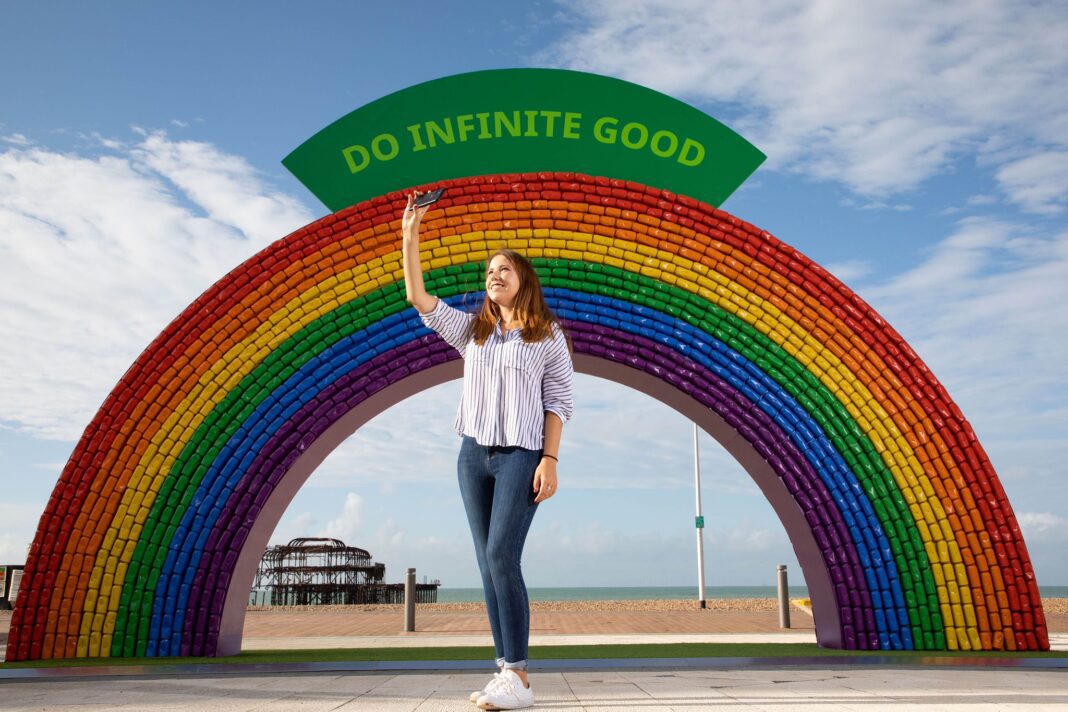 An enormous rainbow arch composed of recycled cans has been built on the seafront to highlight the benefits of recycling aluminium, and stands as a tribute to key workers.

The recycling initiative “Every Can Counts” is responsible for the new installation, which will remain in place until the 14th of September. It can be found between the Upside Down House and the i360.

2,000 cans which had been cast aside make up the body of the arch, which stands four metres high and seven metres wide.

Over the next couple of weeks, Every Can Counts’ recycling ambassadors will be on the beach speaking to seafront visitors about the benefits of recycling.

When lockdown restrictions began to ease, littering in the UK’s summer hotspots reached an all time high.

Brighton & Hove experienced some of the highest rates of littering, including 11 tonnes of rubbish being collected from the beach in a single day. That equates to 2,000 bin liners full to the brim, and represents an increase of 267% from the same time last year.

Every Can Counts is a European recycling initiative funded by a partnership between drink brands, the aluminium recycling industry, and drink can manufacturers.

The initiative reached its most recent UK milestone when it saw the rate of cans being collected climb to a record high of 76%. While this is still shy of the target of 100%, it shows we are beginning to move in the right direction.

The rainbow structure is a symbol of the good that can come from doing what’s right when it comes to empty cans and recycling. Aluminium is infinitely recyclable, meaning there is no limit on the amount of times cans made of aluminium can be recycled. This makes throwing them away a huge waste of valuable resources.

Rick Hindley, Director of Every Can Counts, said:

“From NHS workers and shop staff, all the way through to the local refuse and recycling workers who have worked tirelessly to retain a sense of normality on our streets, this installation is our way of saying thank you for everything they’ve done for us during these trying times.”

He shared why ECC decided to come to Brighton & Hove with their mission:

“We’re here in Brighton & Hove to remind people to take care of the planet, as the key workers have taken care of us, by cleaning up after themselves and recycling their drinks cans.

“Aluminium cans are infinitely recyclable, and the cans collected in Brighton & Hove will be recycled into new ones in just six weeks, helping us get that little bit closer to achieving our ambition of recycling all the drinks cans sold in the UK.

“Our mission is to inspire, encourage and empower people to recycle their drink cans wherever they are.”

“Our city’s beautiful open spaces have been a much-needed respite for many residents during the lockdown, especially the beach.

“The downside has been the staggering amount of litter that has been generated. It’s taken a lot of hard work from our teams to keep our beach and parks clean.”

Cllr Heley stated that there are no excuses for littering recyclable items, and shared how she hopes the new rainbow arch will help:

“There are plenty of litter and recycling bins in the city, so there’s no excuse for leaving a mess.

“We hope the rainbow helps to remind everyone how important it is to look after our beach and recycle more, especially when out and about in the city.

“Our current recycling rate is still only 29.4% and a city like Brighton & Hove needs to do much, much better.”

She explained what to recycle and where to take it if you can’t find a recycling bin:

“We’ve installed more than 170 multi-coloured triple bins on the seafront where people can recycle cans, paper, cardboard and glass, as well as bin their litter.

“And if you can’t find a bin, please take your recycling home to put in your household collection.”