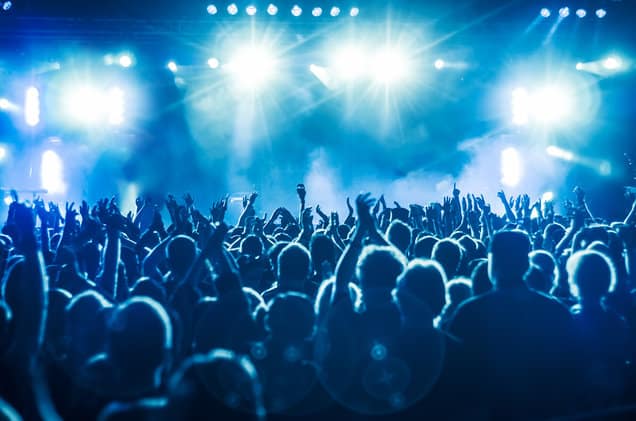 Don’t let Storm Dennis keep you cooped up indoors! Instead, get yourself down to one of these shows we’ve curated below, ranging in genres from alternative rock to techno – something to suit all musical preferences.

Hailing from across the pond in Los Angeles, Moonchild infuses alternative R&B with soul and jazz to create their own distinctive and euphoric sound. The band, consisting of singer Amber Navran, Max Bryk and Andris Mattson, are a trio of gifted instrumentalists, scoring music with a range of tools between them including the flute, saxophone and clarinet. Additionally, Moonchild is affiliating with local charities throughout their European tour by donating £1 from each ticket sold to help the local community.

Rising Bath indie rockers Hum Fuzz should unquestionably be on your radar if they aren’t already. Forming in 2017 and now based in Brighton, the quartet boasted nearly 37,000 listens on Spotify by the end of 2019 and are set to take the stage at The Green Door Store for a charity gig. Playing alongside Attic’O’Matic, expect infectious guitar riffs complemented with groovy bass lines and rumbustious vocals that will get you moving all evening. All profits are to be donated to Samaritans.

Wednesday 19th February – MOLLY (+ guests) at The Hope and Ruin

MOLLY is here for your daily dose of tranquilizing music that is gentle to the ears and soul lifting. Being frequently described as ‘shoegaze’, the Austrian duo effortlessly blends alluring vocals with gradual drumbeats and hazy guitar distortions to create a concoction of serenity. This tour is in support of their debut album, All That Ever Could Have Been, released in June 2019.

Thursday 20th February – PINS at The Hope and Ruin

If there’s one thing the alternative rock music scene is lacking, it’s an all-female grunge band, and PINS is here to fill that void. Forming in Manchester in 2011, the trio’s sound draws influences from exemplary bands including My Bloody Valentine and Jesus and Mary Chain which is apparent in their sound. With Courtney Love inspired vocals, post-punk melodies and politically charged lyrics, PINS embody the third-wave feminism (that was seen in the early 1990s) by bringing it to the 21st century. Support comes from Manchester’s Yellow Brain.

The Green Door Store is hosting another night showcasing the best up and coming Brighton-based acts, this time starring alt-rock trio Ahsoka. Already breaking musical boundaries and drawing on influences from the likes of Nirvana and Radiohead, this gig will be perfect for indie and rock fans as they can expect powerful and raw vocals, energetic bass lines and demanding drumbeats. Support comes from The Dirty Cassettes and Sturdy Wrists with another support act to be announced soon.

FOCAL returns to Patterns with their third installment, this time with techno favourite Shanti Celeste as she joins Mehtola in the club. The premise of the FOCAL series is to feature two producers playing all night long, not bound by set times and instead influenced by a natural, musical progression. Alongside her exhaustive festival appearances across the globe and her monthly NTS Radio show, Shanti released her debut album Tangerines in November 2019 which is sure to influence the ambiance of her set. Expect a flawless blend of house, techno, disco and everything in between.

Swedish singer-songwriter Alice Boman ends the week with melodic and soothing vocals alongside cultivated beats for an uplifting evening. The dream-pop sensation is touring in support of her latest album Dream On, which was released last month, so expect songs like ‘Don’t Forget About Me’ and ‘Everybody Hurts’.