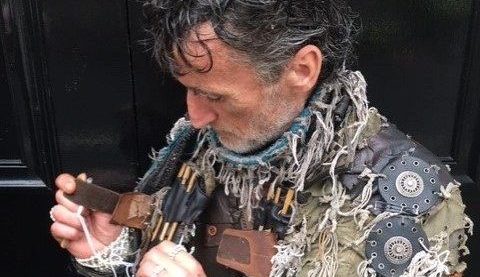 This week, for our Humans of Brighton feature, I met up for a chat with Phillip.

If you live in Brighton, chances are you will have seen Phillip walking around the city or in his usual spot on the steps at the back of The Ivy. He is hard to miss. His outfit is covered from top to toe in trinkets, ranging from chopsticks to locks of hair, all sewn onto his jacket and trousers with dental floss, which, he tells me, is “a hundred times stronger than cotton”.

When I first sat down with Phillip, he was finishing off one of the geckos that he makes and sells to a shop in North Laine. They’re full of Brighton sand that he gets from down near the Marina. “Do you mind if I carry on doing this?”, he says.

He was tying little bits of string round the gecko’s toes. I ask him why.

“I’m doing it because in real life they have sensors between their fingers so they can feel insects or predators coming along the branches of their trees. I’m trying to create something to represent the sensors.” 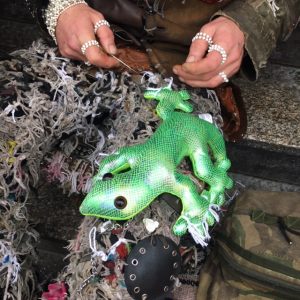 “Errr…I’ve been here six years. I’m from Cambridge originally. I left sixteen years ago after my girlfriend got murdered. I’ve learnt to talk about it now. I went to the other side of the world, to Burma, after it happened to get away from it. I didn’t trust anyone. I’ve learnt to live with it now. And so, yeah…her name was Anne. I met her when I was in my twenties, I’m now fifty-three and I’ve loved her…[he tails off]. If I had the power I would’ve given her the sun. So I left home and I haven’t been back since. That was sixteen years ago.”

Cautiously, well aware of his situation, but overwhelmed by the positivity he radiates in spite of the adversity he faces daily, I ask Phillip if he likes Brighton.

“Ah I love Brighton!” he replies emphatically. “It’s so diverse, it’s alive, y’know! I mean, only in Brighton can I walk around like this.” He gestures towards his outfit.

At this point, I have to ask, “what exactly is the story behind the outfit?”

“Well, if you look carefully you’ll see even a girls’ hair sewn in there look. There’s hundreds of people in here. Flowers that people have put in that I’ve met on my travels.”

“So you’ve built this up over the years,” I say, “sewing more and more things on as you go?”

“Yeah I’ve made all my own clothes.” He says his outfit is “full of people from all over the world.”

“I don’t like to forget people that help me. I always say to them give me something that’s going to remind me of you and they do. Like this girl who just ripped a massive chunk out of her hair and I platted it into my jeans.”

“Yes it is, yes. It’s a memory bank. There’s all kinds of things in there. When I get sad and down and out I look at everything. I never want to forget anyone who has helped me.”

Naturally, our conversation moves on to homelessness in Brighton.

“You know what”, he says, “the homeless people need some help. Two weeks ago a guy was found dead in his tent. What caused it was a massive heart attack brought on by the cold weather, and it’s not even that cold yet! Kevin his name was. Such a nice guy.”

“I always say, never judge a book by its cover. I had everything. I was on top. I had a time-share in Malaysia, we had a down-payment on a little flat. We had our little world. I was up here [he puts his hands above his head]. We loved each other very much, we used to go out and help people, and now I’m down here [he brings his hands down to the floor].”

“Now I have people spitting at me at night and throwing beer at me. I sleep with an umbrella over me. I sleep in Ship Street. Some people look at us and think we’re scumbags, the scum of Earth, we’re not worth anything, we’re drug addicts, we’re thieves, we’re this we’re that, and I just think to myself, hang on a minute mate you don’t even know me, you’ve not even said hello to me but you’re willing to persecute me.”

Despite this, he is keen to emphasise that from what he sees, the good in people outweighs the bad “by a long shot”. 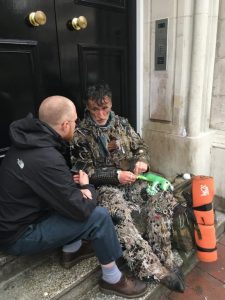 “There’s so many wonderful people in Brighton. Every now and again I will write a letter and I’ll stick it on a lamppost thanking the wonderful people that help me, because I couldn’t get through each day without people helping me. I’m losing weight, look at me. I don’t have money, I can’t afford to eat a lot of the time. When was the last time I had a hot meal? I can’t remember. A bag of mini Mars bars from Poundland, that’ll last me two days, maybe a Vegan sausage roll because I don’t eat meat. That’s my intake of food, I can’t afford to eat anything else. Yesterday it took me all day to make £7. Without so many people helping me, I don’t think I would’ve made it, I think I would’ve perished a long time ago. And I sit here, y’know, if you want to find me I’m here.”

“Sometimes my clothes are like a magnet, they just pull people in. I don’t beg, I never beg anyone for anything. I’ve got long-johns on underneath so I can keep a bit warm. I’ve got my chopsticks.” These, he says jokingly (I think), “are also a defence mechanism,” and he jabs them at me with a big grin on his face. “I wear this over my arm – I’ll show you why, I got attacked – look at this for a scar! So this protects my arm, I made it from the top of my boots, look.”

He says his most important bit of kit is his big rucksack in which he keeps all his possessions. He doesn’t carry plastic bags because they’re bad for the environment.

“Did you see that picture of the dead seagull washed up on the beach that a woman posted?” he says. “It was dead and you could see its rib-cage – all full of plastic! When I saw that it made me feel so sad. We all do it, not intentionally, but we drop things, rubbish, we use things we shouldn’t.”

We talk a little bit about society needing to make the effort to be more environmentally friendly. Phillip says he’s always telling people who he sees drop litter to pick it up and bother to put it in the bin. We agree that lots of people are reluctant to actually make the necessary changes to their lifestyle.

“We should be making bags out of paper, not plastic, making coffee cups that are compostable – but all the people in charge care about is money. That’s all that matters. You’ve got to stand up for what’s right. I mean, the forest is on fire at the moment. The Amazon is on fire. You ask some people and they go – ‘well its not affecting me’. Well, hang on a minute, you’re part of this planet, you should care. You should stand up for what’s right! In our country, too many people live in their own little world and that’s all that matters to them.”

“That’s how society forces us to be, to always be looking out for ourselves”, I reply. 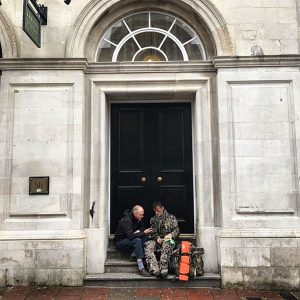 I want to ask Phillip whether he thinks there is anything we can do to change things.

“You see, a couple of people are not going to be heard. You’ve got to get hundreds of thousands of people together in order to be heard. The trouble is people don’t talk to each other anymore. I remember my Dad saying, ‘back in my day people used to talk to each other so much more, we use to come together, there was more sense of community’, and I understand what he meant now. We don’t do any of that anymore. It can’t go on like this.”

During our chat, Phillip said lots of enlightened and enlightening things. I was keen to not ask him questions solely about being homeless, but I am also keen to not glamorise his situation. Phillip made clear that he absolutely does not want to be in the position that he currently finds himself in. To stay alive, he is dependent on the help of ordinary people and over-stretched charities, who step in to fill the breach left by the lack of public services available to homeless people. These public services have been ravaged by years of austerity. In 2018, government data for local authorities in England revealed that Brighton and Hove is second only to London for the number of people sleeping rough in the city.

There are a number of homeless charities in our city, all of which rely on the support of volunteers and donations. Follow the links in the list below if you want to get involved.