Home People I Own The Most Haunted Pub in Britain – An Interview With... 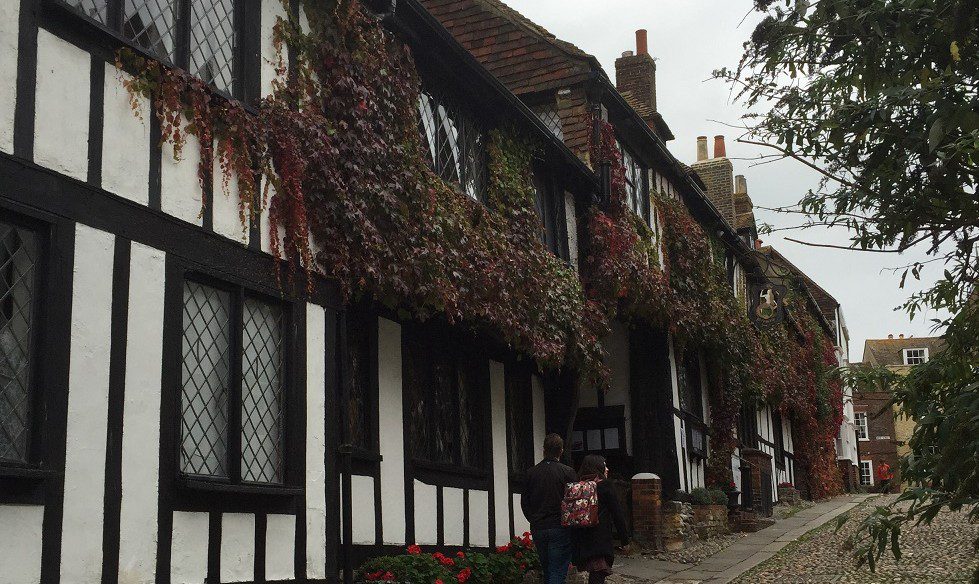 Judith Blincow owns The Mermaid Inn in Rye, the most haunted and one of the oldest inns in Britain. Following an overnight Bjournal investigation which, disappointingly, did not yield a single unearthly manifestation, Graham and Elin caught up with Judith in a beautiful wood-panelled salon in the world-famous establishment, to talk about the inn, cursed chairs, ghosts and Jonny Depp…..

How did you become the owner?

It was a group of eight hotels, and the owner at the time decided to build a brand new hotel in Hastings. He was told “don’t do that” because Hastings is a poor-ish town and you will end up losing your money. He went ahead with £3.2 million of his own money and it brought the company down. Everything went into receivership. I was employed by the receivers to see the company out, because I did accounts for living.

My partner came to me one day and said “Why don’t we buy the Mermaid?”. So I re-mortgaged my house, sold my car and he did the same and we bought it. It is very strange. When you buy from receivers you don’t know how much anyone else has bid, so you have to get as much money as you can. The receivers look down the bids and see who has made the biggest one. We beat a German and an American consortium and paid £50,000 more than them.

Are you from Rye?

My mum used to run the Red Cross in Rye. My dad was an accountant locally. I went to the local school. My partner, unfortunately, passed away in December 2012, but his father was the local milkman. I have, like 54 cousins who still live locally! Everyone is related to everyone. Everyone knows everyone.

I always make sure everyone I employ here is from Rye. We wanted The Mermaid to stay local, and everyone we employ is local. There aren’t many jobs in this area. Billy who has been washing up for 54 years, his daughter and his grandaughter work here.We have 41 staff. 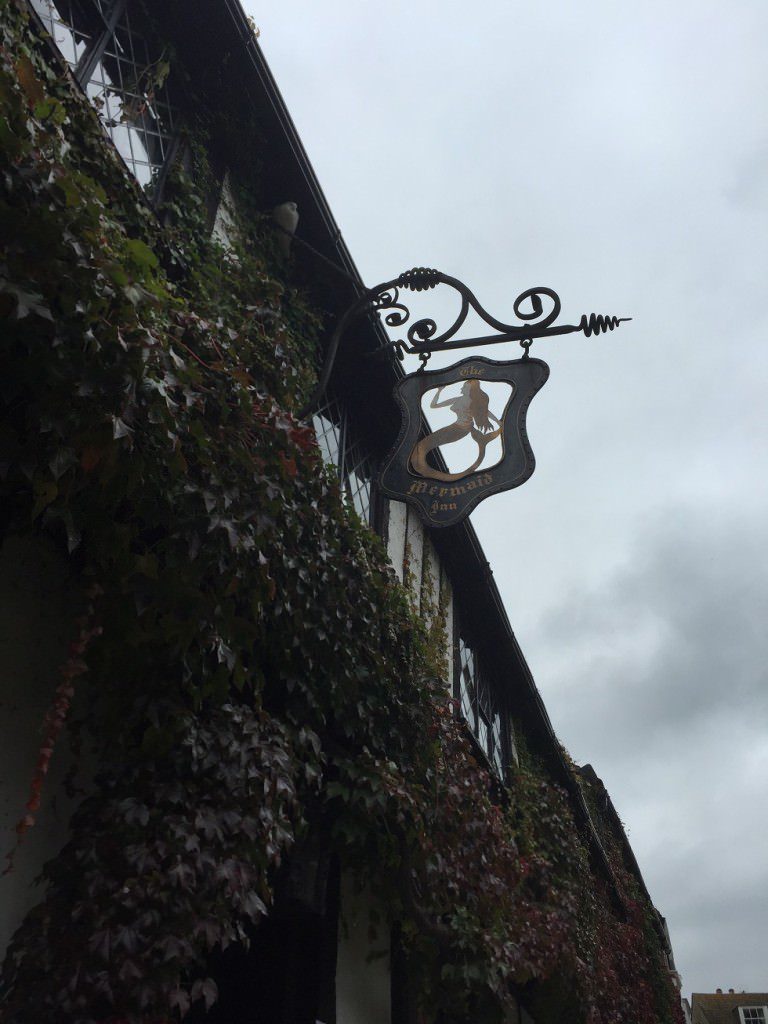 Do you get busy?

We do get very busy. We are already full for Christmas and New Year. Most people come every year. They are like family. It is my excuse to buy a new dress, because you can’t be seen in the same thing, can you?

This is an old place, full of history.

Parts of The Mermaid date back to 1170. We have medieval cellars from that date. The inn as it stands now was rebuilt after it was burned down in the great French raid in 1340.

Have you spotted the witch balls in all the rooms? There’s one in every room downstairs. Quite a lot of them are early Victorian, because the Victorians were so superstitious. If a witch puts an evil spell on you it brings you good luck because it reflects back on them. That’s why we put balls on our Christmas trees isn’t it? It brings good luck.

We also have the ‘unlucky’ chair in the dining room, which is one carved to look like the devil. It is a seventeenth century chair which used to belong to a witches’ coven and has a curse on it. We always tell people not to touch it. We had a school party come round recently with one very naughty girl who was misbehaving throughout the tour.  The children were told not to touch the chair and she immediately sat on it. We had a call the next day to say that she had broken her leg!

Have you come across any ghosts?

Well I only work mornings! No what I find is that it is the guests who stay always see the same things in the same rooms, and they are all so normal. It is not as if someone is making it up.

My weirdest one was that a gentleman left his camera running slow, panning around the room all night. Then the next day when he watched it back you could see a figure in the middle, a light go shooting down and you could hear metal on metal. One of the first stories we ever got out of the library when we first bought it (The Mermaid Inn) was that there was supposed to have been a swordfight in that room. Someone was supposed to kill the other one and they fell down the secret passage, which is where the figure appears in the camera. Now because it is filmed you can see this figure appear at exactly 2:15 in Room 16.

The following week a gentleman stayed, again in Room 16, woke up during the night, put his digital camera on and took three pictures around the room. When he got home again and put it on his computer and had a look, the middle picture had the same figure in and it was 2:15!

What is your own strangest story?

My strangest story personally is that we had a medium who wanted me to take her around every room in the hotel. When we got up to Room 19, she said to me “This room has got something to do with your family. I looked around the room and it is the only room in the hotel which has my mother’s furniture in it.” Do you know when all the hairs stand up on the back of your neck?

We did do a seance in Room 15. There were five of us, my daughter and three other friends of mine. None of us wanted to believe it was true, but everything he said we saw and felt. It was so bizarre.  He (the medium) said “My face will now change as a spirit enters my body”. We looked at his face and his face changed. Then he said “There is a lady here with a dog. Would you like to come and pet the dog” we all did and we could feel the dog. My husband is convinced that someone says something, therefore you see it.

Have you had people running out of The Mermaid?

Yes. A lady who used to work for The Daily Mail lived on Mermaid Street. She did a two page thingy on the Mermaid Inn and ghosts and so on. We had it framed and put on the wall and a lady checked in, saw it, screamed and got back in her car and drove off! We took it down. It’s not there anymore.

People come here half wanting to see things I think. It always seems to be October because obviously you have Halloween at the end of the month, so whether it is psychological, if people want to see things more in October I don’t know. It does seem to be more.

We were on the first ever series of Most Haunted. There were going to be twelve programs. That was it. We were number seven. It was so popular they are on to their fifteenth year in a row now, and even had their own Sky channel for it at one point. We always knew when our one was on because the switchboard would be blocked with people phoning in to book those rooms that appeared on the television program.

It was a bit naughty because they actually set off a smoke machine outside, to give it a bit more atmosphere. All the guests thought we were on fire! We had a mass evacuation of guests at two in the morning. Apart from that it was alright!

Did the Most Haunted team find anything?

They found Rooms 5 and 17 really scary and they are actually two of the most haunted rooms. 17 used to have a rocking chair in the room. We have now put it in the corridor. We had to take it out because it would rock for no reason! So many people have said they have seen and heard things in Room 17, and Room 1, because Room 1 has the oldest bed in the hotel, from 1600. It has holes in the wood where the rope used to go through to hold the straw mattress. There is supposed to be a poltergeist. People come down arguing, blaming each other for moving their clothes, and playing around!

Did the Most Haunted program help you in the long run?

I think the Mermaid Inn was already very well known anyway. If you go to America and you say come from Rye, they say “Oh! Do you know The Mermaid”? I say “Yes! I do!”. We were the first ever hotel to win The Queen’s Award for Industry for Export, i.e for the number of tourists that came over here.

Have any famous people stayed here?

On the wall there is a menu signed by Charlie Chaplin. He came here and stayed with Marlon Brando and Sophia Lauren. They sat in the bar and had a drink while Charlie Chaplin and his daughter ate in the restaurant. Our mayor, three mayors ago was a porter and a waiter here, and he served them. The head chef that day was given a signed menu by Charlie Chaplin and he gave it to us as a present when we bought the hotel.

We have had most of the cast of ‘Eastenders’ and ‘Coronation Street’. Jonny Depp has been here three times. Last time he booked in he stayed under the name of ‘Juan Flamingo’! He came with Kate Moss once. They are lovely. Really nice.

Paul McCartney lives locally. He sends his kids to the school I went to. My husband taught them at school.

The Mermaid has been used in films too and we have had actors stay. In “Captain Horatio Hornblower” Gregory Peck walks up Mermaid Street and through the arch at The Mermaid. ‘Doctor Syn’ with Patrick McGoohan was here as well. There was one film where they blacked out the entire hotel, because everything was night and we keep finding little bits of tape where they taped all the windows up. I have never ever had one day the same as the next. That’s what’s fun.