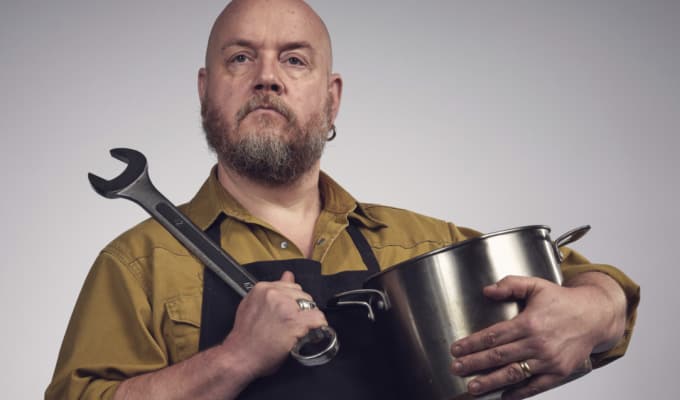 George Egg is many things creative and original, like a tapestry of talent. He is a comedian and a cook, an entertainer and a writer, an interested and interesting man that is particularly innovative in the entertainment industry. Here’s a glimpse in to our conversation where I got to ask him a few questions i had waiting for him up my sleeve.

Your livelihood is pretty niche, how do you describe it is what you do?

I cook real food, using unconventional appliances that you wouldn’t normally cook with, (power tools, cars engines, irons etc.), on stage while making people laugh and then the audience get to try what I’ve made at the end. People like boxes and pigeon-holes. In festival programmes, websites and newspapers they have ‘comedy’, ’theatre’ and ‘food and drink’ sections, but I seem to have found myself doing something that doesn’t comfortably fit into any of them. I perform a live show that is part stand-up comedy, part tongue-in-cheek lecture, part cookery demonstration. My roots are in stand-up and I’ve been performing on the comedy circuit for over two decades and the show is definitely comedy, but I have a big set with a table and power tools and all sort of other paraphernalia and the audience get to enjoy the jokes, the site of what I’m doing as well as getting the smells and even the tastes if they choose to try the food.

What inspired you to combine comedy and cooking?

They’re my two passions! I’ve been into cooking for as long as I’ve been a stand-up and about six years ago, after a few years of wondering whether or not I’d had enough of performing and seriously thinking about packing it in and doing something in the culinary world I had the idea of combining the two and cooking on stage, and it seemed to work. The cooking-with-unconventional-appliances came from real life experience of staying in hotels while on the road doing comedy clubs and seeing what I could cook in my room using the irons, kettle, hairdryer, trouser-press and so on. The first show I did (Anarchist Cook) was all about cooking with hotel room stuff and once that worked I had to come up with new environments, so the second show (DIY Chef) was using power tools and my latest one (Movable Feast) is using car parts and things to do with travel.

Why are you called George Egg?

Not because of the food thing, and not because I’m fat and bald. When I started out as a street performer I thought I’d choose a stage name so I went for ‘Egg’ as it was a song I liked by a band I was into called ‘Mr Bungle’. But at the time I wasn’t cooking anything on stage and I had long hair and a flat stomach! So I’ve grown into my stage name without realising it.

There seem to be an overwhelming amount of mediocre celebrity chefs and comics out there.  Who, in your eyes are the pioneers of the culinary and comedy world?

There’s mediocre everything, as without the mediocre you couldn’t have people who stand out. If everyone was great, then great would be normal. Oh gosh there’s so many people I admire. I’ve got all the time in the world for Jamie Oliver who I think is infectiously passionate and extremely watchable. And Gennaro Contaldo, Jamie’s mentor is by far and away the most entertaining person cooking on tv. I love the weird poetic comedy of Tim Key and I’m a regular listener of comedians John Robins and Elis James’ show on BBC 5 Live.

The mere thought of being on stage performing live sends shivers of fear up my spine. Is it true that you need to have it in your blood to be a performer? What is it like seeing the sea of expectant faces?

I love it. It still frightens the life out of me and I still get extremely nervous before a show, but once I get started, providing I sense the audience are into what I’m doing, it’s an absolute blast. Whether it’s ‘in my blood’ or not I just don’t know. None of my family are performers. My dad was an accountant and my mum a teacher (though I suppose teaching is a form of performing). But from as far back as I can remember I was doing magic shows and plays for my family and their friends.

I’m into cooking but I’m in no way a food snob and I’m as happy with a double cheeseburger from McDonalds as I am with a Boeuf Bourguignon with Saffron Potatoes. This morning I have just enjoyed some Sautéed Potatoes with bacon (a vac-packed thing from Lidl, fried up in a pan) with a poached egg, white ketchup*, sesame seed sprinkle, chilli and smoked salt.*white ketchup is what I call Salad Cream

Your debut show ‘Anarchist Cook’ won ’Spirit Of The Fringe’ Edinburgh Award in 2015, since then it’s been worldwide tours, sell out shows, TV, radio. Basically, huge success! What would you be doing these days if our planet had been unaffected by the coronavirus?

I’d be on tour. The tours of my last two shows were done through promotors and this was the first self-produced tour. I put SO MUCH work into it, arranging the venues and dates so that I wasn’t bouncing around the country with no geographical sense (like I had on previous tours – it’s funny how that doesn’t seem to be so much of a concern to the person booking it when they’re not the one driving!), I’d literally just put in a huge order for posters and flyers and I was due to hit the road in early April on a tour that would go right up until August when I was returning to the Edinburgh Fringe. But sadly it’s all been either cancelled or in some cases postponed. Slightly frustrating, but then we’re all in the same boat. Instead I’m getting stuck into other projects that I’ve been putting on the back-burner (literally, haha) for years as I’ve been too busy doing live stuff, so I’m sure a lot of good will come out of it all. 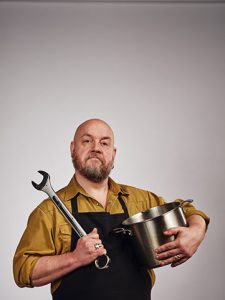 The saying goes that a bad workman blames his tools and my show is, I hope, an example of how true that is. If you’ve passion and flair and instinct and you’re happy to make mistakes and put in the practice then  it doesn’t matter what tools you’ve got. A musical maestro will make a pub piano sound better than a lazy uncommitted amateur playing a Steinway. The philosophy of my show is that you don’t need the right equipment to create something brilliant.

If laughter is the best medicine, what is food?

Gosh I don’t know. Laughter’s a great medicine to an extent but f they come up with a treatment for Coronavirus then I’d rather have that than watch a Michael McIntyre DVD, which I’m certain would make me feel a lot worse. I suppose food is so many things. It’s a way of expressing yourself, it creates a perfect opportunity to spend time with friends, to show love, to nurture, to create and to r

lax. It’s utterly essential. Everyone eats and I think most people enjoy it in whatever form it takes.

This will be tricky but please choose your preference and if you’re feeling generous, tell us why also… Pickled eggs or pickled whelks?

The idea of whelks gives ME shivers up my spine, so I’ll have to go for eggs, although I can’t say I’ve ever really enjoyed the pickled ones very much. Maybe I need to try them again.

Aw that’s a difficult one. Spuds. They’re just so versatile.

Burger. Like I said above, I’m a real sucker for a McDonalds even though I know it’s kind-of wrong.

Tequila please. I’m really into Mexican food at the moment and got a taco press for my birthday last month so Tequila, with a nice Day of The Dead skull on the bottle would be splendid.

Hmmmm. Again I like both. I’ll go for seaweed as I’m a Brighton boy so something seasidey feels appropriate.

Nutroast. I LOVE a nut roast and again it feels very Brighton what with all the left-leaning sandal-wearing incense-burning bead-threading hippies down here.

Continental or fry up?

Fry up. No question. The best meal and even better for dinner than for breakfast

Pasta. Of course I love pizza too, but pasta is such a staple and spaghetti can not be bettered.

I think I’d go for real ale. I love all these trendy new hazy IPAs and beers infused with fruit and so on, but a pint of Harveys (from Lewes) is still better.

I think Spanish. Big lumps of chorizo, beans, paprika, oil and some nice Aioli on the side.

Langoustine. One of my fondest memories was before we had children and my wife and I went camping in France. We had a little Trangia camping cooker and we bought langoustine from the market and made a simple dish with cider and a few bits of vegetables, and we dipped ripped baguette in the stock and peeled the langoustine and, oh my god it was heaven.

Crisps. I’m a sucker for a naff puffed maize snack so something like Space Raiders or Transform-a-snack. Beef flavour.

Jalapeno (see above for explanation of current Mexico obsession)

What is a typical lockdown day for you?

Time is behaving VERY strangely and one day blurs into the next. To be honest it’s ALL about food at the moment. I wake up thinking ‘what shall I make for breakfast?’, and while I’m eating breakfast I’m thinking ‘lunch?’ And then the same for mid-afternoon snack, then dinner, then pudding, then post-dinner snack, and then I lie in bed thinking about what I’ll cook the next day. However I am getting on with other things too. I’ve done a few online shows that have been fun, but weird, I’m doing a lot of online quizzes with friends, and enjoying a lot more family time, playing cards and eating together.

And finally, any wonderful words of advice for the young’ens out there wanting to make a career making people laugh whilst cooking on stage or similar?

I can’t remember where I heard it, but when asked advice on this sort of thing someone once said ‘lower your expectations’. I think it’s a great one. I honestly think that whatever you want to do you’ve just got to go for it and it will happen. But don’t aim too high. Don’t look at famous people on tv and expect to get there because the chances are astronomically slim. Performing to 20 people in a village hall is a massive achievement and just as rewarding as performing to a 3000 seater theatre if you’re proud of what you’re presenting. If your goal is to do a show in front of an audience of 20 and you end up performing to 30 people then that’s amazing. If you want to be the next Jamie Oliver and that doesn’t happen then you might feel you’ve let yourself down