Home People Meet the Stars of Abigail’s Party: An Interview with Jodie Prenger and... 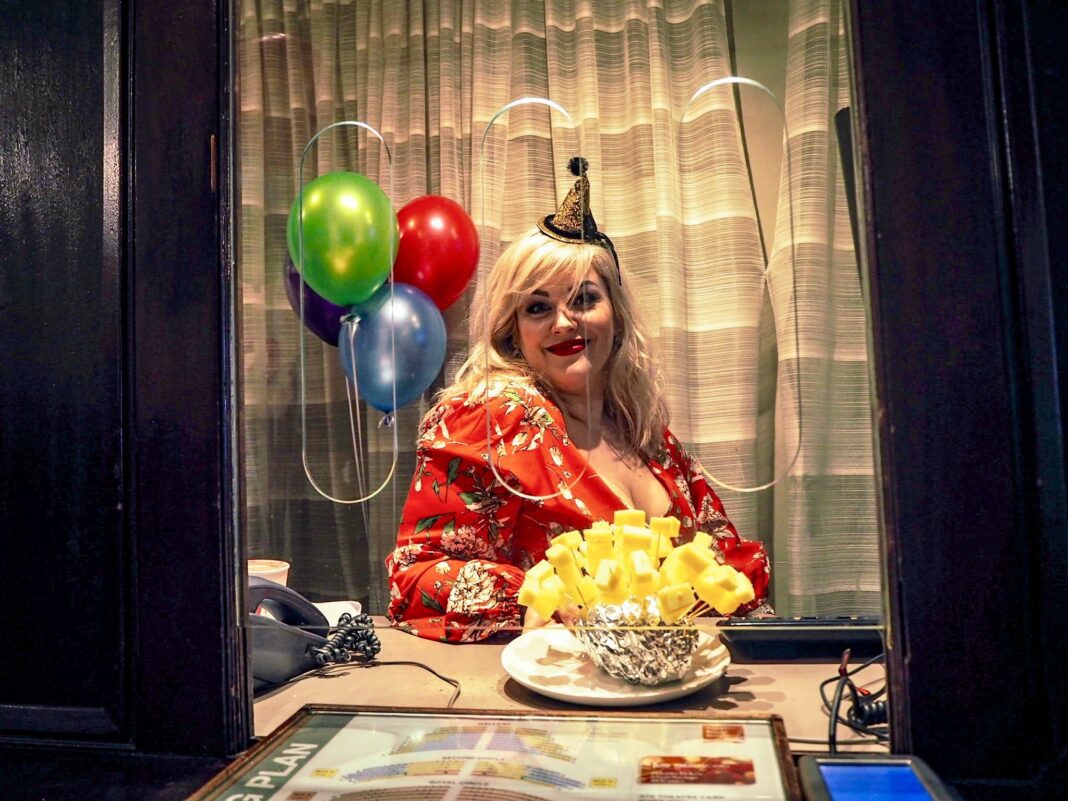 Mike Leigh’s hilarious comedy-classic Abigail’s Party is set to kickstart its UK tour in Brighton this January. Jodie Prenger leads the cast, which tours in Brighton 10 – 19 January 2019 before closing the tour on 20 April 2019 in Edinburgh.

The iconic play set in a 1970’s suburbia follows the hilarious events of party held for Beverly’s newlywed neighbours. As tensions rise, the veneer of respectability is torn away by the warring couples with hilarious and potentially disastrous consequences. Abigail’s Party is one of Britain’s most celebrated comedies and was described by The Guardian as ‘One of the greatest plays about the human condition ever written’

In preparation for its much anticipated run of performances, Brighton Journal caught up with the leading duo. The nation’s favourite, Jodie Prenger (Beverly Moss) and critically acclaimed stage and screen actor, Daniel Casey (Laurence Moss) let us in on some pre-show insights.

Despite not having yet begun rehearsals, Jodie and Daniel, who play the comic Beverley and Laurence Moss, had an electric chemistry and fed off each other’s laughter:

D: We have an awful lot of in depth character work to do before we begin rehearsals in two weeks time. We’ve been given a lot of homework!

J: I only wanted to go into this industry because I thought there wasn’t any homework!

As they both laughed together, it was clear their casting as the bickering, comic couple in Abigail’s Party was a conscious choice by director Sarah Esdaile.  Daniel told Brighton Journal that Sarah intends to do a lot of improvisation with the cast in preparation for their warp back to the iconic 1970’s drinks party:

D: It’s really exciting and interesting to spend time inside these people’s heads and to try and work them out. Sarah our director is fantastic. She’ll get us doing some improvisation rounds off-stage around the script, so we can engage with the party, cooking dinner as a couple, and making drinks. Then when we come back on stage, we have those real memories to bring on with us.

The improvisation of the script will be done with accompanying gin and cheese with pineapple sticks, no doubt!

Jodie famously landed the role of Nancy in Cameron Mackintosh’s revival production of Oliver! at the Theatre Royal, Drury Lane after winning BBC 1’s I’d Do Anything in 2008. Voted the nation’s favourite Nancy, we were intrigued to find out what life in the spotlight was like for Jodie, after whole decade of musical success.

J: I would absolutely love for Andrew Lloyd Webber to do some more shows like I’d Do Anything. They open the doors for so many to have really incredible careers.

Jodie, you are so well known for your voice. Since playing Nancy you’ve gone on to play so many other huge leading lady musical parts – would you say its hard for you to now take to the stage in a non musical role as the part of Beverley?

J: I think it’s all down to how my career roles have succeeded each other. If I hadn’t done Tell Me On A Sunday as a one-woman show, I would have never felt strong enough to do Shirley Valentine. And if I hadn’t done Shirley Valentine, I think I’d question whether I’d be able to play Beverly. You learn so much with each show, and you do get the confidence from somewhere to do roles like this!

Daniel, you have been on screen for much of your career appearing in Eastenders, and Midsomer Murders, as well as many other TV Dramas. How would you say that the experience of being on screen is different to being on the stage?

D: In theory, they’re very much the same in the sense that you approach every character in exactly the same way. Technically they’re different in terms of how an actor projects their lines, it can be far more natural and intimate on screen. However I think the fun you have on set and the relationship you build with a crew over time is exactly the same as the bond you have with those in theatre!

J: I think with you develop more. You can discover something new about your character every night.

D: But then, when something is on screen, you can capture a moment that you may never be able to recreate. It is there forever.

J: (Interrupting) And if you do it on stage – it’s only on a Monday night!

After another eruption of laughter from the duo, I couldn’t help but wonder how the pair would work together in the process of rehearsal to capture those comic, but intimate moments on stage just like they’re captured on screen.

Are you excited to work together?

J: No I’m only kidding. We met last week in casting and it’s lovely, we have a really nice group to work with.

D: The thing about Abigail’s Party is that it is such an ensemble piece, which is lovely. There is such a lot of work to do on the play, that we’re all going to be together rehearsing all the time. So I think it’s going to be one of those play’s that works, really, really well. That is the lovely thing about theatre, is that you can still be incredibly intimate. Particularly at the Theatre Royal here in Brighton, there’s plenty of seats but its still a beautiful intimate space and you draw people into your world.

J: I agree. Brighton is so good for that because the audience are so close to the stage, which is always good for comedy.

What do you think it is that makes Abigail’s Party so relevant today, despite it being first produced in 1977?

D: I think it’s human relationships. As an audience we can recognise people within that. It’s that brittle relationship that Beverley and Laurence have, albeit a slightly abusive relationship, its the gender politics between the two blokes in the play, and it’s how the women act.

J: Exactly, the women act differently when the men leave the room! That’s intriguing. It’s so comic but so recognisable. I think Brighton in particular will love it because it’s set in the 70’s, and Brighton is so hip. It’s so quirky and people will love the era.

Daniel then proceeded to show off his newly sported 1970’s style moustache, which surprisingly isn’t for Movember, but is for his role in the play!

Were you fans of Abigail’s Party before you were cast, or had you never heard of the play?

D: I hadn’t seen it in full, but I was very aware of it. I think it’s exactly that which makes it so iconic, it’s part of a cultural landscape. I love Mike Leigh’s work, and I think the play is such a modern classic.

After prying to see if the audience can expect any surprises in the 2019 tour of Abigail’s Party, Daniel simply replied by saying that writer Mike Leigh, is “fiercely loyal” to his work. Nothing but a modern eye of an audience is enough to make the revisit of the play different and exciting for a new audience.

To catch the hilarious Jodie Prenger and Daniel Casey in Abigail’s Party next January at Brighton’s Theatre Royal, tickets are available here.