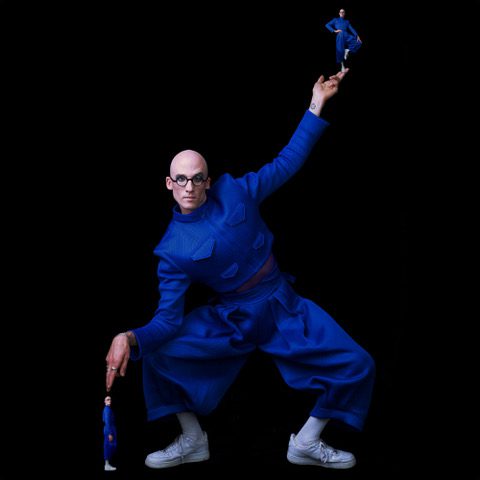 FORMER CORRESPONDENTS FRONTMAN
HITS THE ROAD WITH NEW PROJECT
TICKETS ON SALE TODAY
WATCH THE VIDEO FOR “VOLATILE TIMES” HERE
Mr Bruce AKA Ian Bruce is the former frontman of The Correspondents, one of Britain’s most in-demand festival acts for a decade.
An acclaimed portrait artist and an award-winning animator in his own right, Mr Bruce began hatching plans for a solo career while on tour in Australia with The Correspondents in 2018. Bored in hotel rooms between shows, he found himself writing dance music that harked back to his early clubbing days, rather than the jazz and swing infused sound with which he found fame. Fleshing out the songs in the UK with the London-based producer Angus Kemp, Mr Bruce arrived at the 5 club-ready cuts you can hear on ‘RACE TO NOWHERE’ [PART ONE].
Raiding decades of UK dance, from tech house and drum’n’bass to garage and dancehall, the five-track EP ‘RACE TO NOWHERE’ [PART ONE] finds Mr Bruce letting loose as never before. Arriving in the Autumn of 2021, the record was flamboyantly fun, yet lyrically deep; touching on an intense array of topics, from the climate crisis to the breakdown of his marriage in 2019, and his late twin brother, who died just aged 20.
Plotting the follow-up to the EP for release early-on in 2022, ‘RACE TO NOWHERE’ [PART TWO] promises to find Mr Bruce offering deep reflection on the untimely passing of his Correspondents partner-in-crime Tim Cole, who passed away from a pulmonary embolism aged just 35. When placed together, the two parts will together form a complete album like nothing he has made before: ‘RACE TO NOWHERE’.
Writing hard-hitting pop songs designed for the dance floor, Mr Bruce will be bringing his latest creations to live spaces across the UK in 2022 in what he promises will be a boundary-pushing experience. Famed for his high energy antics and spectacular dancing The Correspondents were named one of Glastonbury’s Top 10 acts by The Telegraph and the highlight of Wilderness by The Times, Mr Bruce was back on stage for a smattering of festival in Summer 2021 (Wilderness, Boardmasters, Solfest, ValleyFest, HowTheLightGetsIn & more), but this Spring tour will be his very first solo headline gigs to date.

The brand new stage show featuring new choreography and some of his most flamboyant costumes to date will fuse together his latest material with a carefully selected handful of The Correspondents’ hits to create a unique and unparalleled live experience.