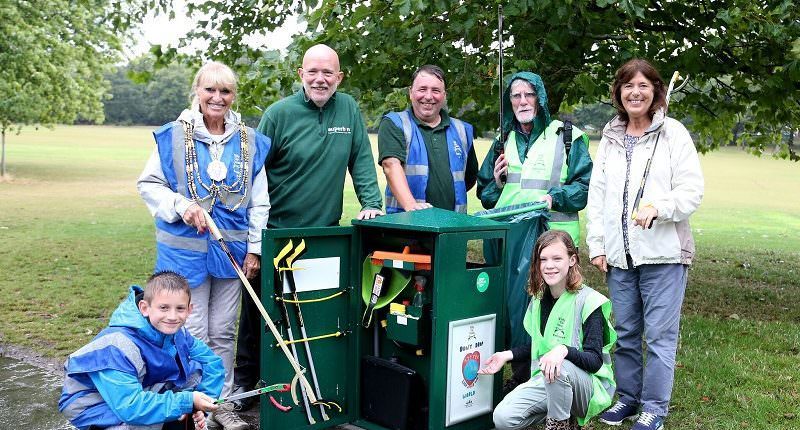 Volunteer litterpickers braved the rain yesterday to celebrate the arrival of the city’s first Superbin in Preston Park, Brighton, which was unveiled as part of the Mayor’s Big Tidy Up event.

The bin has a secret compartment which stores litter-picking equipment for volunteers to use.

Entrepreneur Ian who designed the Superbin, had travelled all the way from his home in Manchester, explained how he came up with the Superbin design after becoming a volunteer in his local park, stating:

“There weren’t enough tools for everyone, so I thought if we put a box in the park then all the volunteer groups could share and we wouldn’t have to buy any more!”

If you were to visit Preston Park and see the Superbin, at first glance it looks just like a normal litter bin. However when the door at the back of the bin is opened, you’ll find a stash of litter picking equipment including litter pickers, gloves and bags kept inside, all to be used by volunteers.

The bin which was installed as part of the council’s Tidy Up Team project, will now se trained volunteers who have been given a code, store their tidying equipment.

The bin therefore enables trained Preston Park Tidy Up Team volunteers to arrange events at short notice without waiting for equipment to be dropped off and picked up.

The council launched the Tidy Up Team last year and aims to encourage local people to help keep their parks and green spaces tidy by taking part in, and organising litter picking events. The scheme is co-ordinated by Cityparks staff and supported by Cityclean and local community groups.

In doing so, the council runs monthly training courses for volunteers to become Tidy Up Team members.

The trained Tidy Up Team volunteers who are only expected to spend a minimum of 15 minutes each week collecting litter, receive protective equipment, materials, tools, and support from Brighton & Hove City Council, so they can safely collect litter in their local parks and green spaces across the city, and dispose of it using approved methods.

As a result of this, litter picking events are now taking place regularly across the city, run totally by volunteers.

Park Ranger Garry Meyer in relation to this said: “The response has been better than we ever hoped with hundreds of local people coming forward to offer their help, and keen to organise and run their own community events”.

Councillor Gill Mitchell, chair of the environment committee added: “It’s fantastic that so many residents are coming forward to sign up to the Tidy Up Team projects and help keep our city’s parks and open spaces looking lovely all year round.

“The Superbin is a great idea and a welcome addition to the park and its team of hard working volunteers.”

If you are interested in getting involved and joining the Tidy Up Team, you can do so by filling out a Volunteer for the Tidy Up Team form. You’ll then be added to the waiting list for training and as soon as there are spaces available you’ll be contacted with further information.

Additionally, If you have any further questions you can email cityparks.volunteers@brighton-hove.gov.uk or call 01273 292929.