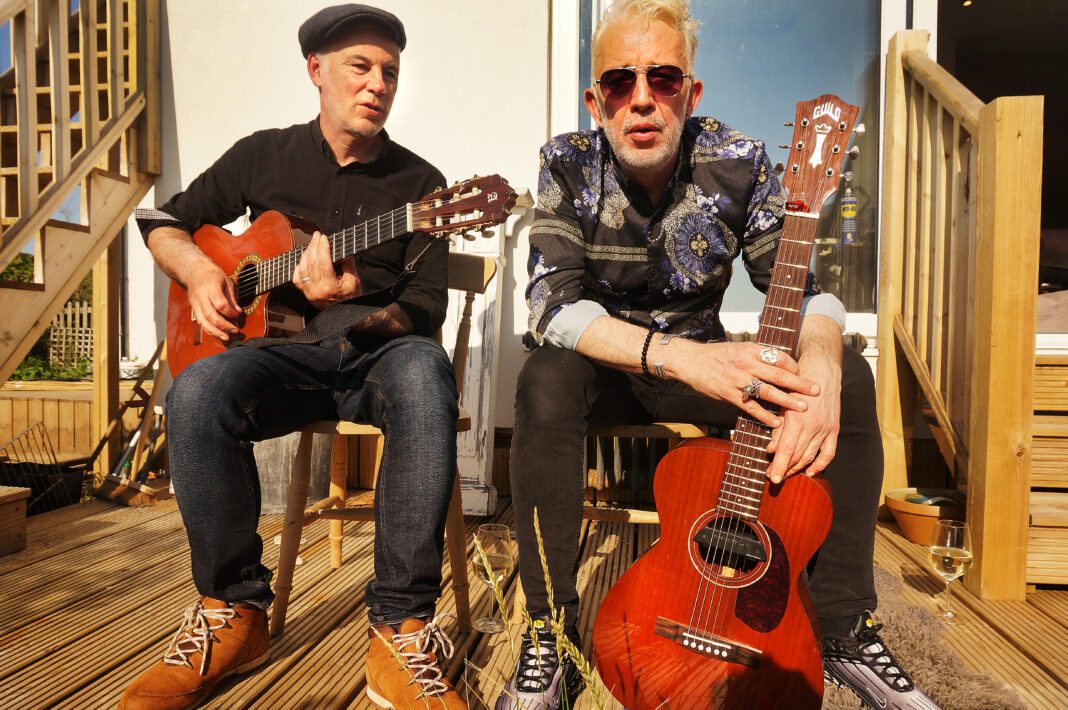 O’Connell & Love are proud to release their long-awaited second studio album, Will You Be There? on Friday, November 26, 2021, on Mountmellick Music.
Listen to the album here (please don’t post this link):
Stream:  https://soundcloud.com/oconnell-and-love/sets/will-you-be-there-1/s-9rMDIk43EjB
Videos:  https://www.oconnellandlove.com/videos
Larry Love, of South London outlaws Alabama 3, is an Ivor Novello Award-winning songwriter, best known for Woke Up This Morning, theme song of The Sopranos and its film prequel, The Many Saints Of Newark, released in September 2021.

In O’Connell & Love, “Alabama 3 singer Larry Love and songwriting partner Brendan O’Connell team up again, and variety is the spice of their musical life …. there’s definitely more than a hint of magic in the air.” (Daily Mirror)

Larry and Brendan first collaborated on Alabama 3’s debut album Exile On Coldharbour Lane (1997, One Little Indian). Their first album together was Ghost Flight (2006, One Little Indian), released under the name Robert Love and credited by Kris Kristofferson as “one of the finest debut albums I’ve ever heard”.

Their first release as O’Connell & Love was Minesweeping (2015, Mountmellick Music), an eclectic box of songwriting treasures that was well received by fans and critics alike.

“Larry Love of Alabama 3 and Brendan O’Connell have been making music for years, and Minesweeping is evidence that the collaboration works… This is a strong album that would boost anyone’s music collection. “  (Press Association & Regional Press)

“When you get a great vocalist, brilliant song writing, interesting musicians and a range of influences coming together like this, the whole really is greater than the sum of the already considerable parts.“  (Pennyblackmusic)

Over the last 6 years, O’Connell & Love have continued to hone their songwriting skills, and taken their time in crafting 12 captivating new tracks. They could not be prouder to releaseWill You Be There?, showcasing the extent to which they have developed as a songwriting duo.

Love: “We were determined to spend the time these songs needed. As with Minesweeping, this album has taken a long time because we needed to step away, give it some time then come back to these tracks. In some ways lockdown and the pandemic helped with this as we were originally intending to release the album in summer 2020. We have smashed it all up and rebuilt it multiple times and feel it’s much better for this reworking.”
Jointly-produced by  Brendan O’Connell, bringing his love of Latin and Spanish guitar, and his Irish trad session roots, and legendary dance producer Wizard (a.k.a. Greg Fleming, famed for his work with the Chemical Brothers , Dizzee Rascal, X-Press 2, Wiley, DJ Fresh, M.I.A./Diplo, Lyza J, Chase & Status and a host of other dancefloor luminaries), Will You Be There? displays such a range of styles and influences that you can never quite pinpoint the genre.
O’Connell: “This album has more edge to it, more sophisticated arrangements, changes of style and tempo. There are a few straightforward catchy tracks, but most are far more complex, revealing themselves over time and drawing you in deeper with each listen.”

There are  lyrics about the desperate risks taken by refugees, the division and polarization that splits society down the middle, the need to stand up and be counted, the tragedy of addiction, the end of an affair,  … but there is humour too, and tenderness, a feeling of joy and a reminder to savour each moment. Combine all that with a compelling, rhythmic swing and this album is truly uplifting.