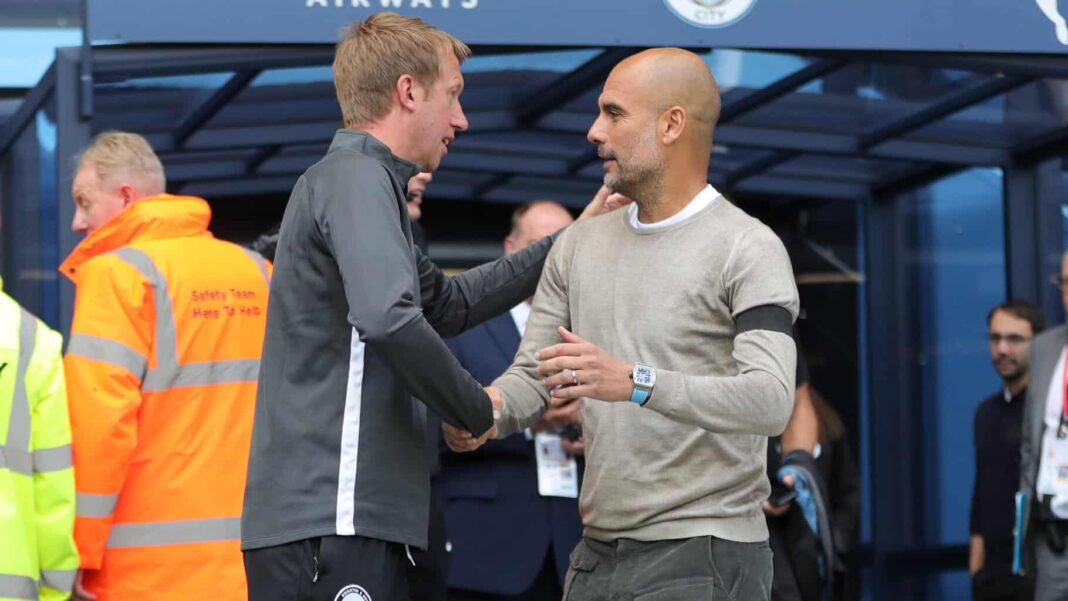 Saturday’s match against Manchester City was always going to be a difficult one for Graham Potter’s Brighton and Hove Albion as they suffered a 4-0 defeat, yet regardless of the result, there are a lot of positives to take away from this game. It was clear that Potter had no intentions of going to the Etihad to sit back and defend, he wanted to play his style of football and take the game to Pep Guardiola’s Manchester City.

Even though Brighton conceded an early goal from Kevin De Bruyne, they stuck to the game plan to frustrate City and attack on the break, with the three centre backs of Lewis Dunk, Dan Burn and the debutant Adam Webster passing the ball around in the defensive third. Although this style of football is somewhat risky against a top side like City, you can only admire the philosophy that Graham Potter is trying to implement at Brighton. Dan Burn was once again a standout performer and looks a real talent for the Seagulls. One particular moment that sticks in the memory was an incredible first touch from the centre back as the ball flew over his shoulder, which even received applause from the Argentine striker Sergio Aguero.

Yet Brighton did manage to create some chances, Leandro Trossard having the pick of the bunch late in the first half as the City goalkeeper Ederson came flying off his line, only to stop the Belgian’s strike with his knee. Trossard kept getting into good positions with a fantastic opportunity to put Brighton on the scoresheet early in the second half as Neal Maupay played the ball across the box into the path of the Belgian winger who produced a slightly scuffed shot which was then blocked by the head of Fernandinho. Trossard definitely looks to be the bright attacking spark that Brighton have been looking for, consistently getting into good positions to score as well as creating plenty of chances for other players as well. Perhaps the only criticism of him currently is the quality of his finishing, but he is still young at just 24 and as he gains more experience in the Premier League his ease in front of goal will develop.

However, Brighton struggled to put the ball in the net, and against a side with the quality that City have, it was inevitable that they would score more. Sergio Aguero went on to score his first high into the net with the second goal coming from a sensational strike into the top right corner from the edge of the box. Even with Brighton having their fair share of possession, it seemed that City could just shift up a few gears and slice through the Brighton defence.

As the game went on it seemed to settle into more of a rhythm with Brighton conceding defeat and City comfortable with their three-goal lead. It was around the 66-minute mark that we saw the introduction of the Under-23’s star player Aaron Connolly, who came on for the last 20 minutes or so, having played earlier in the week in the EFL Cup. In that game the Irish 19-year-old not only scored but collected the man of the match accolade as well. And he looked comfortable during his Premier League debut, even having a little run at the City defence before offloading the ball to Pascal Gross who was unable to return the favour as he tried to find Connolly later in the move. But this is evidence that Potter is willing to give the younger players at Brighton a chance to prove themselves in the first team and I am sure that Brighton fans will be seeing much more from the young striker throughout the season.

City then went on to procure their fourth goal through their substitute Bernardo Silva, who scored almost immediately after coming on late into the game. Whilst the result was disappointing, and it certainly wasn’t what Brighton were looking for, there are plenty of positives to take from the performance. Brighton fans will be pleased to see attractive attacking football with a large share of possession, a complete turn around from how the Seagulls played last season. And it was great to see the introduction of Connolly who certainly deserves his chance in the first team after some outstanding performances in the youth set up. There is plenty to look forward to with the season only just beginning.