Brighton and Hove Albion are set the to showcase the issues they face with fans leaving rubbish behind, by producing a fantastic new art installation, solely created from litter left in the Amex stadium after a recent premier league game.

The installation, which will be revealed at Saturday’s game against Wolverhampton Wanderers, will be in the shape of a giant football, and entirely made up of plastic, paper, cardboard, cans and other debris that was left in the stadium when the Seagulls met Spurs last week.

Created in partnership with Brighton and Hove City Council and environmental charity Hubbub, the artwork is intended to shed light on the growing problem of how much litter is being left behind after football matches. The special focus being put on reducing litter comes as part of the #StreetsAhead campaign, set up last year with the aim to create litter free streets and to stop rubbish ending up in the ocean. 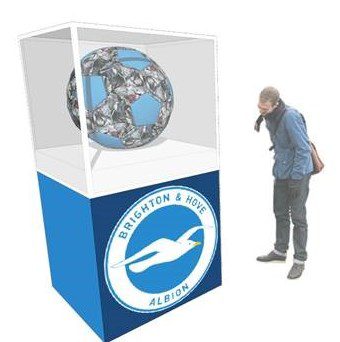 It is hoped that by raising awareness, fans will be encouraged to take pride in their city and take a moment to remember that a horrific 35 of fish off the Brighton coastline have plastic in their gut, and that any single piece of rubbish that they drop, no matter how small, could end up inside the body of a marine animal.

Alongside this art installation, Saturday’s game will also see the introduction of litter referees, who will be mingling with the crowds and handing out ‘cards’ when they spot someone correctly recycling or disposing of litter. These cards can then be exchanged for Albion-related prizes, including car stickers, key rings and badges, in order to positively reward those fans who take the time to help maintain the cleanliness of the stadium.

Councillor Gill Mitchell, who chairs the council’s environment, transport and sustainability committee, has commented on these moves taken to prevent littering:

“Fans get so caught up in the game and the atmosphere they can forget to bin their litter properly, especially when there are thousands of other supporters milling around.This sculpture will bring litter to the attention of the fans and be a football-related reminder of how much rubbish is tossed onto the ground before, during and after a game rather than binned properly.”

Albion facilities manager, David Baker, has also offered comment on this move towards a greener stadium. He said:

“Our supporters have always shown a commitment to keeping our stadium and surrounding area clean and tidy going back to our days at Withdean when a team of supporters used to complete litter clearances in the local area following each match. Since moving to the American Express Community Stadium we have seen a continual increase in the amount of recycling we produce thanks to supporters making use of the facilities available.

“We are delighted to be working with Hubbub and Brighton and Hove City Council as part of the Streets Ahead campaign to raise further awareness of this and encourage even greater use of these facilities both at our venues and elsewhere.”

Brighton and Hove Albion will meet Wolverhampton Wanderers on Saturday 27th October at the Amex Stadium.