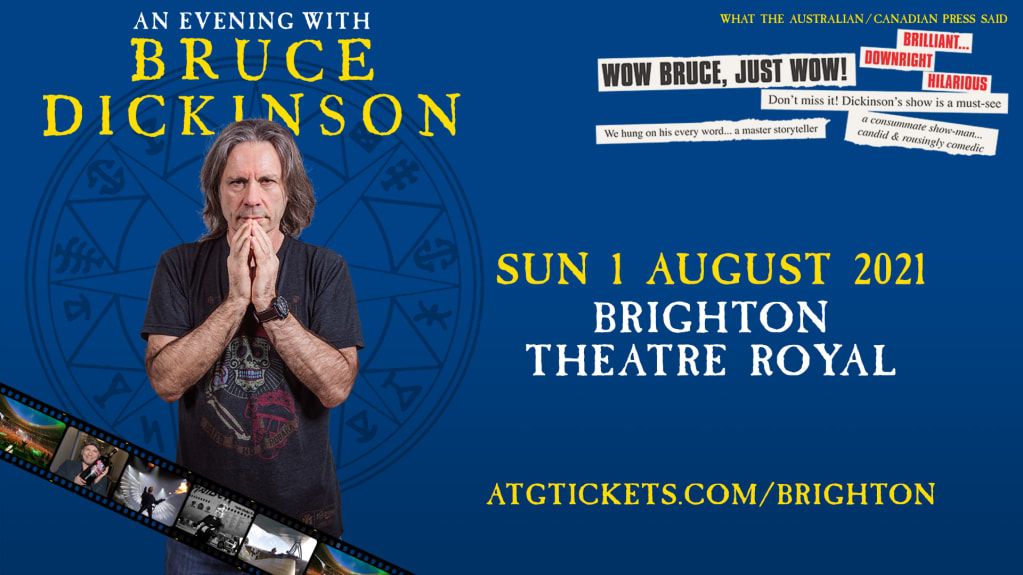 An Evening With Bruce Dickinson

Don’t miss out on this unique opportunity to spend an up close and personal evening with one of the world’s most captivating icons in an intimate environment. Bruce Dickinson is considered one of the world’s most storied musicians. Aside from decades spent delivering high octane performances with his larger than life persona in Iron Maiden, Bruce has lived an extraordinary off stage existence too. A true polymath, his accomplishments include: pilot and airline captain, aviation entrepreneur, beer brewer, motivational speaker, film scriptwriter, twice published novelist and Sunday Times best selling author, radio presenter, TV actor, sports commentator and international fencer….to name but a few.

Get ready for an upbeat night of solid gold 60s hits and 80s contemporary genius as the Roy Orbison Story celebrates the musical legacy of The Big O and his friends. Barry is joined on stage by the sensational guest pianist Boogie Williams as they present original material written but never sung by Roy Orbison and chart busting hits originally made famous by Jerry Lee Lewis, Procol Harum, Del Shannon, ELO, Tom Petty, Chris Isaak, The Spencer Davis Group.

Four hugely talented girls pay tribute to the UK’s finest girl band with breathtaking dance moves, replica costumes and some of the finest vocals in the UK.

This is a high energy show from beginning to end, packed with all of Little Mix’s greatest hits and it’s suitable for all ages! Featuring songs such as DNA, Wings, Salute, Black Magic, Shout Out To My Ex and many, many more.

The Dreamboys are setting pulses racing across Britain with their official UK tour, smashing records with more shows than ever due to pent up demand!

Joining The Dreamboys in 2021 is former fireman and Love Island star Michael Griffiths who will be showing off his cheeky charm and setting those pulses racing as he gets his kit off. With appearances throughout the UK including all major cities, snap up your front row tickets to this epic show before it’s too late.

The Chicago Blues Brothers – A Night At The Movies

Direct from London’s West End, join The Chicago Blues Brothers and their 11 piece band, for a brand new 2 hour all singing, all dancing hit parade bringing you the greatest movie anthems of all time, performed live in concert.

Featuring songs from Footloose, A Star is Born, Dirty Dancing, The Greatest Showman, The Full Monty and many more, not forgetting all the much loved Blues Brothers classics, with a ton of surprises and lots of lunacy.

80s Live will make you feel shiny and new as they travel back in time to one of the most iconic eras of music for the night out you have been dreaming of. Put your hands together and get into the groove as their live band Electric Dreams perform over two dozen chart topping anthems from artists including Wham, The Weather Girls, Culture Club, Rick Astley, Madonna, Duran Duran, Soft Cell, The Human League, A-Ha, Tears for Fears and more!

Infamous cabaret misfit and drag miscreant Joe Black invites you to indulge in a gloriously raucous gin soaked musical cabaret extravaganza at Theatre Royal Brighton for what will be the largest hometown show to date!