So we celebrated our 21st birthday this year! The Clock Tower Sanctuary was started by a group of concerned residents who felt very challenged by the number of people on Brighton’s streets – and that was 21 years ago! Things are very different now. This group of residents went to the council wanting to do something to help, and the council said, ‘what we really need is a day centre for young people’, so they set one up. They found some premises just north of the Clock Tower, hence why we’re called The Clock Tower Sanctuary, and about 10 years ago we moved into this building (on North Street).

How did you end up working for The Clock Tower Sanctuary?

I’ve worked in the Community and Voluntary Sector in Brighton for, let’s see…20 plus years. I had a little spell when I was freelance and I was asked to cover the CEO role here while they were recruiting for a permanent post-holder. Within about 3 days of being here I thought, ‘actually I’d quite like to apply for the job’, so I applied and luckily was successful!

I’m not surprised Frances felt this way. This is the first time I’ve visited the centre and I can tell already that its a special place…

It’s a wonderful charity. It was all very new to me, I’d never worked with homeless people or young people before. I’d worked mostly with adults from a variety of disadvantaged backgrounds.

So a bit of a change, I suggest…

Oh a huge change! But I love it. 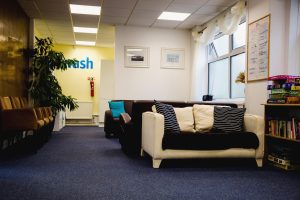 What is your impression of the extent of homelessness in Brighton? In 2018, a count conducted by Brighton and Hove City Council stated that there are just 64 people sleeping rough in the city. Do you see it as a much bigger problem than that?

As a bit of context for that figure, in 2019, we saw 128 new young people come to us for the first time. That’s huge – a big increase for us on previous years. Of those 128, nearly 60 were rough sleeping. So if that statistic of 64 people rough sleeping in November 2018 was correct, then the vast majority of them would have been people that we came across and we know that isn’t true. The council knows it’s not accurate, anyone who works in the sector knows, anyone who lives or works in the city knows just from walking around. Rough sleeping is huge issue in Brighton.

Frances makes clear this isn’t a criticism of the council, explaining that it’s very hard to conduct an accurate count of rough sleepers…

I think one of the challenges for the local authority, with whom we have a really good relationship, is that there is no single accepted way to really accurately count the number of rough sleepers, or even to really know the total number of people who are homeless.

So, for us, homelessness ranges from the people you see sleeping in a doorway or under the pier through to someone who might be sofa surfing for a few weeks, or who is sleeping in a car or a van. Perhaps they might be having a couple of nights in a backpackers hostel, or they might be somewhere like Nightstop for a few nights. Homelessness isn’t just people who are rough sleeping, and our experience is that young people will go through a number of those scenarios in a bit of a cycle – so they might rough sleep a couple of nights a week, and then have a couple of nights in a hostel or on someone’s sofa, for example. You can’t really base a figure on one count conducted on one night of the year, which is where the 64 figure came from.

So I think it’s important to look at all the evidence, not just that one count one night a year. What we do is look at the number of young people who have approached Brighton and Hove City Council for housing advice, how many people we’ve had through the door, and what groups like Shelter or Centrepoint are saying.

In your experience, what are some of the main causes of homelessness for young people?

Some homeless people have serious mental health issues linked to trauma that they’ve experienced, and then often they might use substances to handle their response to trauma, and that becomes a bit of a Catch-22.

To speak about Brighton and Hove in particular, it’s an area where there is high income inequality, a huge gap between the poorest and the most well off, high housing costs, a high proportion of people in rented accommodation paying huge rents, and a real lack of affordable housing. In recent years, we’ve also started to see young people coming to Brighton to get away from gangs in London and ending up without a home. 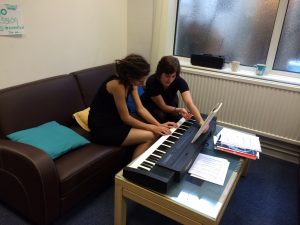 Young homeless people can participate in a wide range of activities at the Day Centre.

So you see a definite, direct link between the housing crisis and the rising number of young homeless people?

Yes definitely. If you look at the Shelter report, it talks about structural reasons for homelessness, and that’s to do with things like housing provision, housing cost, inequality of income and welfare reform – the change to universal credit. Then there’s the personal side, the personal causes like mental health or drug addiction. These two sides used to be seen as quite separate, but we are now starting to see just how interlinked they are – you can’t separate the two out.

Yes I’d imagine both sides are actually really tied up together because they affect each other, I say.  If your benefits get changed and it becomes harder to access money then maybe your mental health suffers, and then that affects your ability to do the things that might help you find some stability.

Yes exactly, and the recent changes to benefits disproportionately affect young people, because now if you’re a young person entitled to housing benefit, you don’t get the full amount. If you’re under 35 you get a reduced amount – but if someone’s looking for private rented accommodation, it doesn’t cost them less because they’re a young person. To me, it seems the whole reform programme was built on the premise that you will have a support network who will help you with those things.

So when people ask me what the government could do, well, what we would like to see is additional support for young people. Don’t penalise them financially, focus on young people who are homeless because if you can catch people when they’re young and homeless, they’re much less likely to become part of the long-term homeless population.

At The Clock Tower Sanctuary, we see ourselves as a bit of a safety net for young people who have fallen through the gap of family and social services and education. We feel that if we get a second run at helping them to get themselves sorted, they won’t be still on the streets or more likely dead in their early forties, because that’s what the life expectancy for homeless people is.

Why do you think Brighton consistently comes so high in statistics regarding numbers of homeless people? Do you think it is largely because the housing crisis is such an acute problem here?

Yes, that’s a big, big factor. So there’s insufficient housing and the housing that we do have is expensive. If you’ve got insufficient housing, people who in other areas might be able to access a mortgage and buy a place are not able to do that here, so they end up in the private rented sector. That means those private rented houses and flats aren’t available to people on a lower income or earlier in their housing journey.

Also, you often hear stories about landlords not being keen to accept people on housing benefit, I say…

I think it’s a mixed picture. Because Brighton’s such a great, tolerant city, actually we are seeing a couple of examples of landlords saying we really want to be part of the solution. A good example is Julian Bishop of Bishop Sullivan lettings. Julian approached us with the idea of a ‘sleepout’ at the i360 in December 2018, and so our annual ​’Big City Sleepout’​ was born. This year, the Sleepout has raised more than £21k. So I don’t think all landlords are bad, and I think the main issue is a lack of affordable housing.

What facilities and services does The Clock Tower Sanctuary offer young homeless people?

We have a whole range of services that would be useful for young people in crisis. You can come in and get a hot meal, we’ve got washing machines, tumble dryers, showers – so you can come in and get clean and dry. We provide access to IT and phones so people can get online to do benefit applications or keep in contact with people. You can use our address to register with a GP or other services and we can help you do that. We have strong relationships with about 50 other organisations in the city who provide specialist services, like Pavilions, Oasis and Rise. It’s a big network!

We’re really clear about what our job is. We provide a physical space that people can come to and start to do the things that might help them get to a place where they can begin to deal with the bigger issues in their lives. So once people are in and we’ve helped them over the immediate issues of being hungry, cold and wet, we then link them up with our team of frontline support coordinators who help them think about what they need to do next, and who can link them up with other services.

Our mission is that no young person becomes part of the long-term homeless population, so in order to do that we do need to meet their immediate needs, we do need to give people food parcels or direct them to food banks and take them to the job centre, but to help them get into housing we also need to help them change some of the bigger issues in their lives. 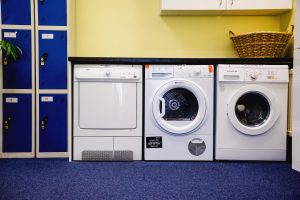 Young homeless people can wash their clothes and have a shower at the Day Centre.

It’s a really complex issue I think. Of course I would say people should support our Winter Campaign and support us throughout the year by financial giving, because I think if all you do is give a young person money, what you’re not doing is linking them into a place where they can start to address those bigger issues. Helping us to continue to provide services for people in crisis has a huge impact. We are the only day centre for young homeless people in Brighton and Hove.

Thank you so much for your time, Frances! You can donate directly to The Clock Tower Sanctuary via the charity’s website.

Artist of the Week: Ellie Hipkin