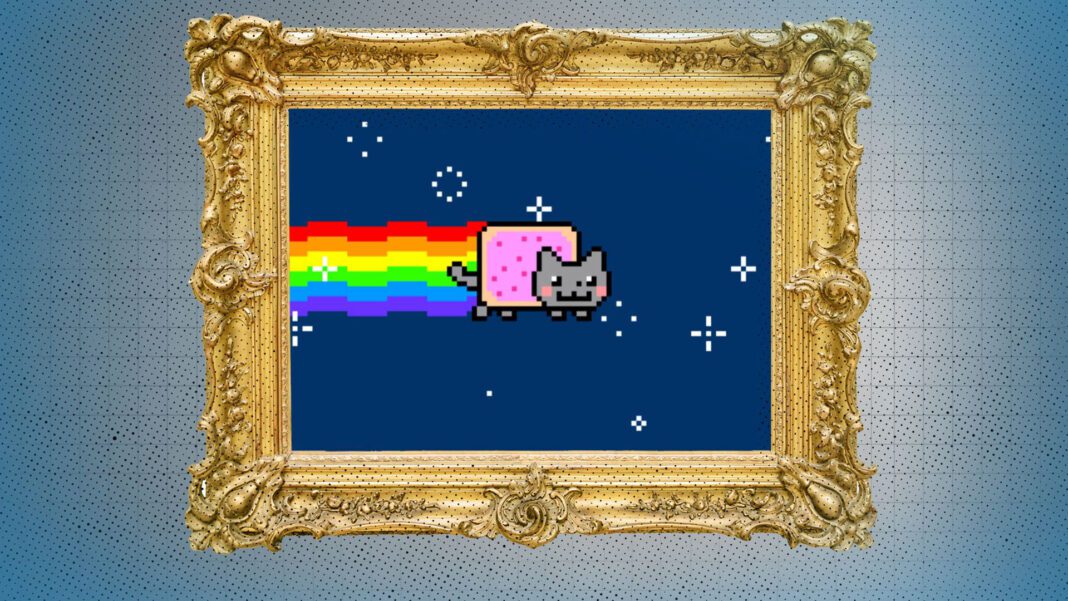 Like Bitcoin, NFTs (non-fungible tokens) are cryptocurrencies. But whereas individual bitcoins all have the same value, NFTs are more like baseball cards. Each token has a different value and they can’t be used to buy things. They exist on your computer as digital representations of artworks, songs, films and games, among other things.

NFTs have been around since 2017, when the first mainstream experiment in crypto-collectibles emerged: CryptoKitties. The average price for one of these cat cards was about US$60 back then. But that’s chicken feed compared to current takings. Rights to a single digital image recently sold at auction for US$69.3 million (£50.2 million). CryptoPunk 7804 (a crudely drawn alien with a pipe) sold for US$7.5 million. A house on Mars was purchased for US$500,000. A digital house that is, not one that you might live in. Twitter CEO, Jack Dorsey, recently sold his first ever tweet as an NFT for just under US$3 million.

When you buy an NFT, you’re buying a unique certificate of ownership, which is locked away on an immutable distributed database known as a blockchain. The creator of the artwork generally retains the copyright and in most cases, you own little more than bragging rights. Creators are also likely to pass the costs for creating your NFT files (or “minting” them) on to you (around US$100 as I write this).

Most of the time, what you’ll also be responsible for is an enormous carbon footprint.

Counting the carbon cost of NFTs

Because they depend on a blockchain, NFTs use a lot of energy. Most creators still use Ethereum, a blockchain secured using a similar proof-of-work system to Bitcoin. This involves an energy-intensive computer function called mining. Specialist mining computers take turns guessing the combination to a digital lock (a long string of random digits). The computer that correctly guesses the combination wins a reward paid in a cryptocurrency called Ether. The digital lock resets roughly every 15 seconds, and the competition continues. Ethereum uses about 31 terawatt-hours (TWh) of electricity a year, about as much as the whole of Nigeria.

It’s very difficult to calculate exactly how much responsibility the NFT industry should take for Ethereum’s carbon emissions. Ethereum was going to run with or without NFTs. But with the growing demand for digital art, NFT buyers and sellers are becoming liable for an increasing share of Ethereum’s total energy use, and some artists are starting to think twice.

The French digital artist, Joanie Lemercier, recently cancelled the sale of six works after calculating the associated energy costs. The sale would use, in just ten seconds, enough electricity to power the artist’s entire studio for two years.

ArtStation, a site for digital artists to showcase their portfolios, recently developed an NFT marketplace. But within hours of telling the world about the planned launch, widespread condemnation on social media forced ArtStation to scrap the project.

Alternative technologies exist that enable NFT markets without the carbon headache. Sidechains use negligible amounts of energy to process NFTs because these transactions occur on a more centralised platform where costs (and carbon footprints) are much lower.

Damien Hirst is due to release a collection of NFTs called The Currency Project using the Palm sidechain. Hirst will still be accepting payment in Bitcoin though, so his NFTs could still come with hefty carbon baggage.

NFT enthusiasts argue that the increasing popularity of blockchain technology, with its voracious appetite for energy, provides incentives for upgrading energy grids from fossil fuels to renewable sources. Similar arguments have been made by the airline industry: in order to fund the efficiency innovations that could make aviation greener, people should fly more, not less. For NFTs, evidence shows this approach is unlikely to work. Due to the competitive nature of proof-of-work mining, booming NFT markets are encouraging the construction of reliable coal-fired power stations, so that crypto miners don’t have to suffer intermittent access to renewable generation.

Some NFT creators are trying to have their crypto-cake and eat it by using carbon offsets. Buying offsets funds conservation work, with each carbon credit purchased equivalent to one tonne of carbon saved, which is either stored in a tree or theoretically prevented from escaping into the atmosphere through some sort of industrial innovation. The Offsetra company provides an emissions calculator and sells carbon credits to offset emissions caused by NFT transactions. The NFT marketplace Nifty Gateway recently auctioned eight carbon net-negative NFTs “inspired by Earth and the climate crisis”. The artworks received 60 carbon credits. Each offset was itself an NFT.

NFT carbon credits (or any carbon credits for that matter) depend on clever accounting and a belief that carbon, like NFTs on a blockchain, can be immutably locked away in trees forever. It cannot. Nifty’s website explains that offsets make sense for neutralising our unavoidable emissions, “after we’ve done all attainable actions” to reduce our carbon footprint.

But does acquiring bragging rights to a digital image that anyone with an internet connection can enjoy constitute an unavoidable part of one’s carbon footprint?