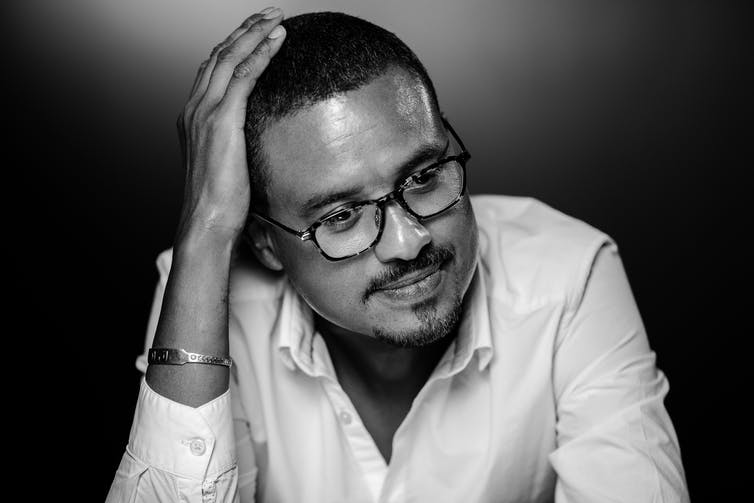 David Diop: his haunting account of a Senegalese soldier that won the Booker prize

to a French mother and a Senegalese father, David Diop has won the prestigious annual International Booker prize for translated fiction. He shares the prize with his translator Anna Moschovakis for the novel, At Night All Blood is Black (2018). The book tells the story of a Senegalese soldier who descends into madness while fighting for France in the first world war. It has been a bestseller in France and won several major literary awards. Literature scholar Caroline D. Laurent, a specialist in Francophone post-colonial studies and how history is depicted in art, told us why the novel matters.

Who is David Diop?

Diop is a Franco-Senegalese writer and academic born in Paris in 1966. He was raised in Dakar, Senegal. His father is Senegalese, his mother French and this dual cultural heritage is apparent in his literary works. He studied in France, where he now teaches 18th-century literature.

At Night All Blood is Black is Diop’s second novel: his first – 1889, l’Attraction universelle (2012) – is about a Senegalese delegation at the 1889 universal exhibition in Paris. His next book, about a European traveller to Africa, is set to come out this summer.

What is At Night All Blood is Black about?

Its tells the story of Alfa Ndiaye, a Senegalese tirailleur (infantryman) and the main narrator of the novel (he uses the first-person pronoun ‘I’ in most of the text). He is fighting on France’s side – and on French soil – during World War I.

The novel starts with the narration of a traumatic event that the African soldier has witnessed: the long and painful death of his best friend, Mademba Diop. The traumatic event directs Alfa’s vengeance, that could also be perceived as self-punishment. He kills German soldiers in a similar way, reproducing and repeating the traumatic scene. He then cuts one of their hands off and keeps it with him.

This results in Alfa being sent to a psychiatric hospital where doctors attempt to cure him. It deals with the concepts of war neurosis and shell shock that appeared then (what we now refer to as post-traumatic stress disorder).

The form of the novel associates elements of an inner monologue as well as a testimony. This allows the reader to see, through the perspective of a colonial subject, the horrors of war.

In this sense, Diop writes a nuanced text: he describes the violence perpetrated and experienced by all sides. Alfa Ndiaye becomes a symbol of the ambivalence of war and its destructive power.

Why does the book matter?

It’s important because it addresses what I would refer to as a silenced history: that of France’s colonial troops. Though the colonial troops, and especially the Senegalese tirailleurs, a corps of colonial infantry in the French Army, were established at the end of the 1800s, they became ‘visible’ during World War 1 as they took part in combat on European soil.

Despite this, the involvement of African soldiers during the two World Wars is rarely taught in French schools or discussed in the public sphere. The violence exercised during recruitment in French West Africa, their marginalisation from other troops and the French population notably through a specific language (the français tirailleur) – created to prevent any real communication – and their treatment after the wars go against a specifically French narrative that emphasises the positive aspects of France’s colonialism and its civilising mission.

The lack of visibility of the history of Senegalese tirailleurs is also connected to the ongoing dispute about specific events. One in particular is the massacre of Thiaroye. In December 1944, between 70 to 300 hundred (the numbers are disputed) Senegalese tirailleurs were killed at a demobilisation camp in Thiaroye, after having asked to be paid what they were owed for their military service.

Read more:
The time has come for France to own up to the massacre of its own troops in Senegal


Diop also manages to shatter stereotypes associated with Senegalese tirailleurs. In French historical and literary representations, they are seen as both naïve children in need of guidance and barbaric warriors. Senegalese tirailleurs partook, against their will, in war propaganda: this representation was to create fear on the French side as well as on the German side (Die Schwarze Schande – the Black Shame – presented African soldiers as rapists and beasts).

Diop appropriates this in order to complicate it: while Alfa’s violence in killing his enemies follows this logic, one realises that this causes – and was caused by – great distress. Moreover, Diop also inverts this vision as he questions who is human and inhuman: Alfa asserts that his Captain, Armand, is more barbaric than he is.

Diop thus manages to question representations of black soldiers dictated by colonial stereotypes – in order to dismantle them.

Why does this Booker win matter?

Diop receiving the International Booker prize is of great importance because At Night All Blood is Black exposes a specifically French history that is connected to France’s colonial endeavours. And even though the novel focuses on France, it connects to other histories as it indirectly points to the fact that other European colonial powers also resorted to using colonial troops during wars and erased their role in subsequent commemorations.

The novel also shows the importance and power of translation as Anna Moschovakis has managed to translate all of the beauty and horror of Diop’s prose. In the same way that Diop manages to combine his dual heritage in his text, Moschovakis has allowed English readers to be exposed to a history that is specific to France, and yet similar to other histories.