Home News The story of the Wayfair scandal in USA;Child trafficking claim 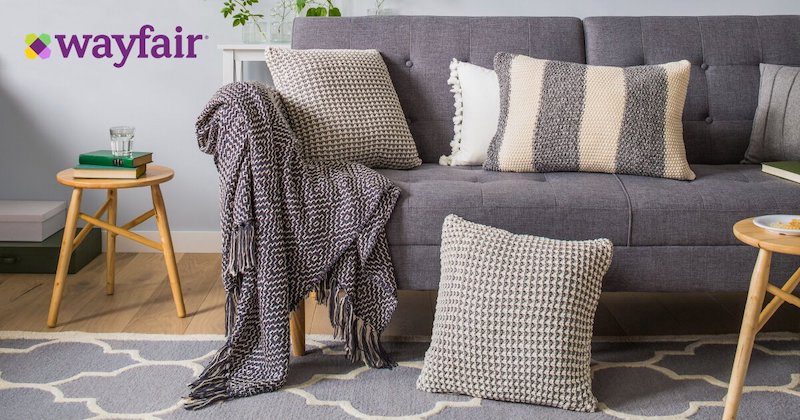 Last week the US-based furniture and household goods e-commerce company Wayfair were accused of allegations of child trafficking. The company came under fire for allegations of  “child and human trafficking” because it sold high-priced furniture on the website but under the names of children who were previously reported as missing .Since then details of the Wayfair child trafficking case have been investigated and has been trending on social media, mainly twitter!The social media platform became the main focal point for this scanal after the details emerged from Reddit and Qanon. 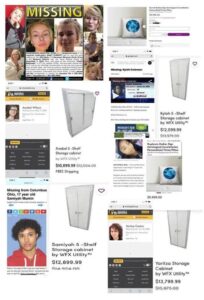 On 10th of July, a Twitter user posted a screenshot of Wayfair’s website, accusing the company of selling cabinets at extraodinary high prices but under the guise of facilitating illegal child trafficking.The User shared a screenshot from Wayfair’s mobile site that shows four cabinets that cost between $12,699.99 and $14,499.99. The cabinets were named Neriah, Yaritza, Samiyah, and Alyvia, many twitter users claimed they were the names of missing children.

In a statement to Newsweek on Friday, a spokesperson for Wayfair said: ‘’There is, of course, no truth to these claims.’’ The company explained that they sell industrial and domestic products and the prices are reasonable. After these latest developments, the company removed the products from the WAYFAİR site and stated that there was a problem with naming, further fueling the fire.

“Recognizing that the photos and descriptions provided by the supplier did not adequately explain the high price point, we have temporarily removed the products from site to rename them and to provide a more in-depth description and photos that accurately depict the product to clarify the price point,” spokeswoman Susan Frechette told Fox Business. 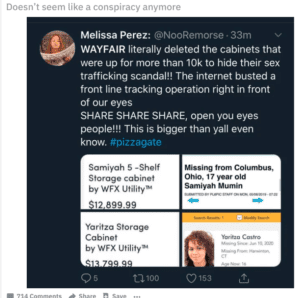 The theory originated from speculation among popular members of the conspiracy-theory group QAnon and grew on Reddit’s r/conspiracy subreddit. QAnon users and readers have repeatedly made false allegations of child trafficking against Democrats, celebrities, and businesse without any base (https://www.insider.com/wayfair-human-trafficking-conspiracy-theory-tied-to-qanon-2020-7)  however it appears they have in this case some very serious explanaing to do. Wayfairgate looks like it will be here to stay and has taken over the zeitgeist.Not only are these unusal high prices but it appears they are basically the same wardrobes .It now seems there has been similar issues that have been found on amazon and etsy.