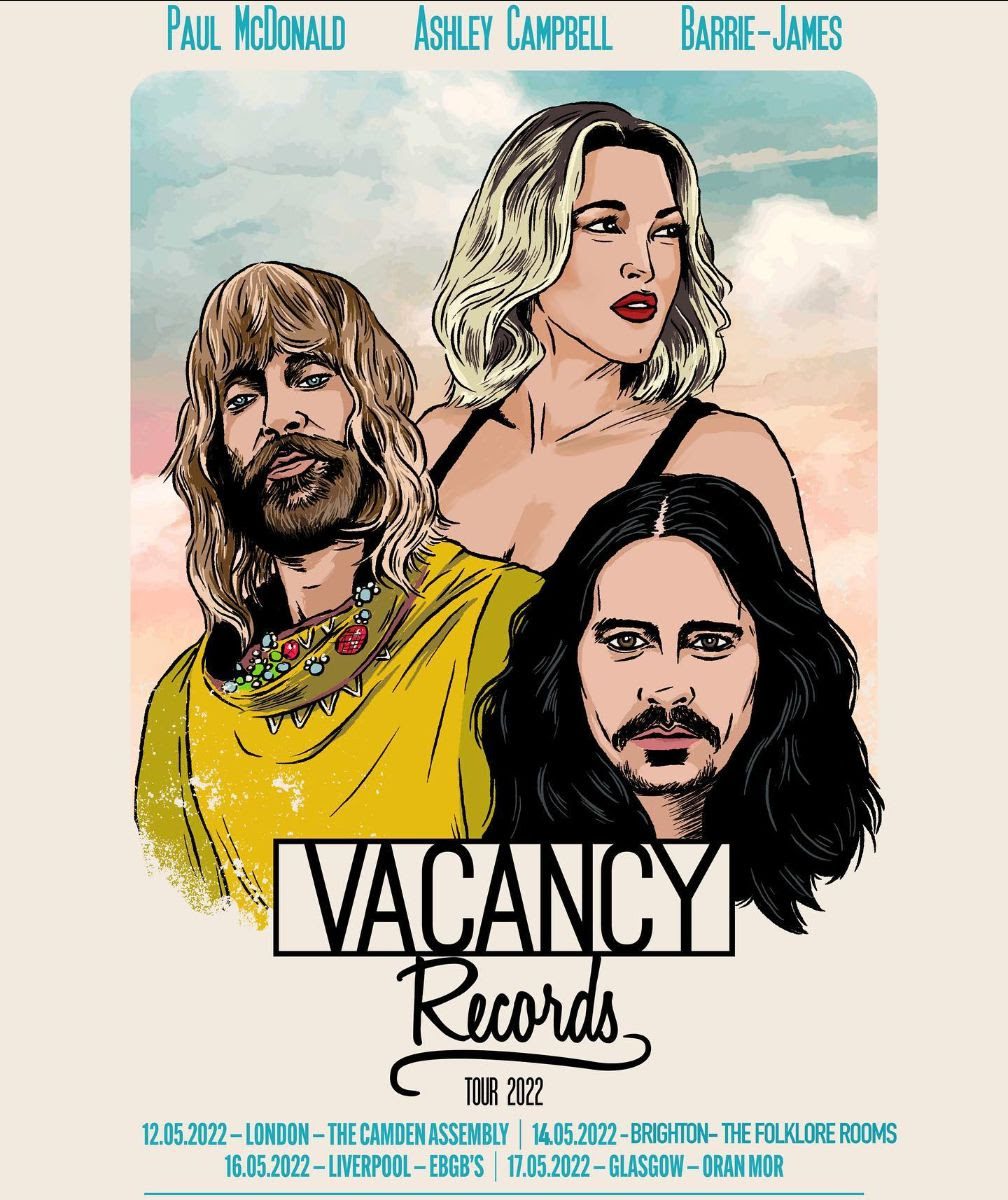 AEG, SJM Concerts (with C2C) and Modern Age Music in association with Heliocentric Entertainment are delighted to announce the inaugural Vacancy Records UK Tour which will take in four dates in May 2022. Teaming up are three high profile signings to the Glasgow-based label, namely Ashley Campbell, Barrie-James and Paul McDonald.

All have released albums through Vacancy Records but this tour will be the first time that they have been able to meet up, let alone perform of the same bill. Each of the acts will perform their own set at each show. On the current Barrie-James album ‘Strange Desire’  he performed not only with Lana Del Rey as a guest but also with Ashley Campbell, this tour will be the first time the two of them will perform their track live.  This showcase will take everyone back to the glory days where performers would each play an individual set and also perform with each other to create true “Music Magic”.

Ashley Campbell said, “Some of my all-time favourite music memories are from touring in the UK. The fans are such true music lovers and such a joy to play for. I am beyond thrilled to be returning this May! I can’t wait to share my new music live and in person and definitely hit a few pubs along the way! Thank you for having me back”.

Paul McDonald added, “I’m beyond excited about playing shows overseas. It has been a dream of mine since I first started writing songs as a kid. I’ve heard nothing but amazing things about the fans and the passion they have for live music and I can’t wait to experience the energy and culture. I have a feeling I’m going to want to make this an annual thing. Much love to Vacancy Records for making this dream a reality”.

Barrie-James commented, “Really looking forward to heading out on tour with Ashley Campbell and Paul McDonald. I feel this Vacancy Records tour, with the way it’s shaping up, will be one of the best I’ve been a part of. It’s a privilege”.

Sean Bruce Gillies, CEO of Vacancy Records said, “We are so proud that our three Vacancy artists will be touring the UK on the same bill, a great opportunity to hear real music, played by top musicians… it will be a tour and a night to remember”.

The Vacancy Records UK Tour is a fantastic chance to connect with not only the cream of the crop of this ambitious label, but also the best of international modern Country.