What the WOFFF is vlogging on in Lewes?

Do you want to learn how to make a film on your smartphone or create a great vlog this weekend ? These are just a couple of the fun, innovative events going on as part of WOFFF the Women Over Fifties Film Festival 2019 at Lewes Depot this weekend. Dispelling all the cliches of the over 50s woman being just another shade of grey, the festival even boasts the intriguing Intimacy on Screen workshop with industry expert Ita O’Brien where you get to find out about how the professionals tackled those intimate scenes in top dramas like Gentleman Jack. 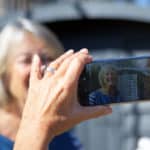 Now in its second year in Brighton & Lewes, the festival promotes and celebrates films directed by and starring women of a certain age – a demographic that is still woefully under-represented in the film industry. By embracing a mix of mainstream Hollywood films like Emma Thompson in Late Night, as well as indie shorts from the UK, Australia and the US, there is something for everyone in a festival which celebrates the best out there now on screen and online.

Dad dancers support a grand cause for Prostate Cancer UK

Artist of the Week: Annabel Wyatt