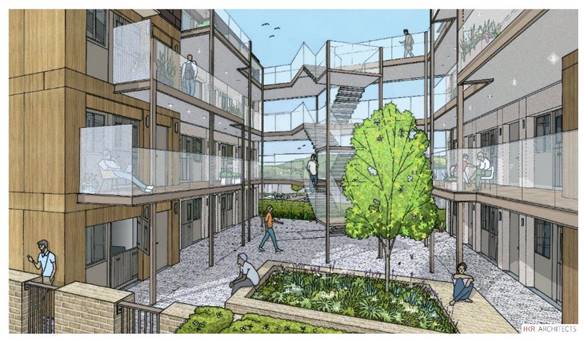 On Wednesday 5th February, Brighton & Hove councillors voted unanimously to grant planning permission for YMCA Downslink Group to build 30 units of transitional housing on derelict ground in Moulsecoomb. This is the culmination of over two years of hard work by the team at YMCA, working in partnership with the council, and in consultation with local residents’ groups. It is hoped that building work will start within two months and that the first residents will move in before winter.

“In the last two years, Brighton & Hove has seen a 40% increase in young people reporting as homeless.  Last year, YMCA DownsLink Group provided over 150 young people in Brighton, who were homeless, rough sleeping or leaving care, with somewhere to live.  In 2019, 72% of the young people living in YMCA DownsLink Group supported accommodation moved on positively to independence. However, one of the key issues for moving on successfully is the lack of suitable ‘move on’ accommodation.  We’re delighted that the scheme has been approved as it will a provide a vital pathway for young people to move between supported accommodation and full independent living. It will also provide an affordable housing solution for young people at risk of homelessness but with low support needs. It is part of the solution to the housing crisis within the city.”

The Eastergate Rd scheme, on land owned by Brighton and Hove City Council, is part of a council housebuilding scheme known as New Homes for Neighbourhoods.  YMCA DownsLink Group has also secured funding of £1.5 million from the Homes and Communities Agency, a government organisation now known as Homes England, towards the £3.1 million cost of the scheme.

The flats will be let to local young people who have shown that they have the life skills and behaviours that enable them to live independently with only a low level of support.  Fifty percent will be moving on from specialist supported housing provided by YMCA DownsLink Group within Brighton & Hove, with priority being given to young people from the Moulsecoomb area.  The remaining 50% will be nominated by the council, either because they are ready to move on from specialist supported housing or because they have a housing need and require a low level of support to manage a tenancy.  All referrals must demonstrate that they have the skills and maturity to move on to more independent accommodation: this scheme offers a stepping stone towards full independence with two-year tenancies for single occupancy only.

One of the key features of this new build is its modern, modular construction. The building will be mostly pre-assembled in a factory before being transported to the site for erection. This will drastically reduce the amount of time it will take to construct the scheme. The development will also incorporate several sustainability measures including photovoltaic panels, air source heat pumps and green roofs.