Thank you for joining me at the Amex Stadium and enjoy your weekend. 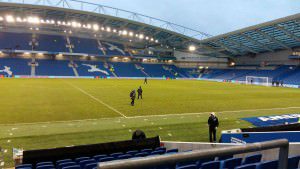 16:58 – FULL TIME – Rob Lewis blows the full time whistle, which is met by loud cheers from around the ground. Another three points for the Albion in an exciting game that had everybody on edge throughout. Despite a couple of lapses in concentration, Albion fully deserved the win and extend their winning streak to four games. Brighton remain 4th but go eight points clear of 7th place. Bolton drop to the bottom of the Championship and continue their fight against relegation.

16:55 – Skalak wins a free kick on the right hand side of Bolton’s penalty area. The new signing is standing over it and clearly wants to take responsibility. Lua Lua looks to have won the argument. His effort breaks through the wall but is easily dealt with by Amos.

16:52 – Jiri Skalak comes on in place of Knockaert. The Czech international has SIX minutes of stoppage time to announce himself in style at the Amex.

16:49 – Knockaert plays a one-two with Murphy down the right and lets loose from 25-yards. His rising effort sails over the bar and another chance goes without punishment.

16:47 – Brighton break forward and Kayal loops an effort on goal that falls just wide of Amos’s left hand upright. Bolton committing lots of men forward. A fourth Albion goal is there for the taking.

16:43 – Ten minutes left for Albion to hold on or improve this lead. The ball falls nicely to Pratley inside Albion’s penalty area, but the Bolton midfielder slices his effort wide and Albion are let off the hook.

16:42 – A nasty challenge from Josh Vela sees him go into the referee’s book. Lua Lua turns the defender and Vela has no choice but to bring his opponent down. A deserved yellow and Lua Lua up on his feet ready to play on.

16:40 – Bolton are enjoying a brief spell of possession. Brighton must hold tight and exploit the growing gaps in Bolton’s defence. Can’t help but feel there’s at least one more goal in this game.

16:36 – Zamora’s effort proves to be his final contribution as he makes way for Kazenga Lua Lua. Murphy switches into the middle alongside Hemed, with Lua Lua taking his natural position on the left.

16:34 -Hemed plays Murphy down the left wing, in a combination that has worked well so far today, before his cross falls to Zamora, who swivels to shoot narrowly wide as the crowd hold their breath.

16:33 – 20 minutes to go here at the Amex Stadium and Brighton could really do with a two-goal cushion for the first time in this game. Bolton have proved their scoring capabilities.

16:30 – Ridgewell goes off to a standing ovation from the home crowd, in his final game for the club. Lua Lua will have to wait a while longer. Calderon on to get some match fitness ahead of his expected run in the team.

16:27 – Good work from Murphy and Hemed on the left results in Murphy’s cross being cleared away from danger. Improved tempo from the Albion as Lua Lua and Calderon look ready to make an appearance from the sideline.

16:25 – Zach Clough is stripped and ready to come on. Silva makes way for the lively youngster, who returns after a month out injured.

16:19 – GOAL FOR BRIGHTON – Albion take the lead for a third time with Beram Kayal getting on the score sheet this time. A clever flick from Hemed, similar to Zamora’s for the second goal, sits up nicely for his fellow countryman Kayal, who beautifully bends the ball past Amos and into the far corner from just inside the box. Amazing game here at the Amex. Brighton 3-2 Bolton.

16:17 – TWO BIG CHANCES AT EITHER END – David Stockdale saves brilliantly from Feeney as he runs clears through on goal before Hemed’s effort is cleared off the line at the other end, after he rounded Amos and shot from a tight angle.

16:16 – The home crowd sound disgruntled with Albion’s second half start and expect more against the Championship’s 23rd placed team.

16:13 – GOAL FOR BOLTON – Jay Spearing drills the ball home from the edge of the box after Bolton’s initial corner is unconvincingly cleared from Albion’s box. Ridgewell could have done better and the game is once again, all square. Brighton 2-2 Bolton.

16:11 – Knockaert is held back after mesmorizing skill near the byline but his cross doesn’t make it into the danger zone. Bolton break up the other end and win a free kick.

16:09 – A vital block from Bruno in front of Stockdale’s goal saves Albion from a second equaliser. That would have been a nightmare start for Hughton’s team.

HALF TIME – ~Albion lead 2-1 at the break and will be frustrated by the cheap goal given away. A goal of the season contender from Hemed rounded off a comfortable first half for Brighton and Neil Lennon will need to lift his struggling side at the break. Hughton will be happy with the first half performance and will expect more goals from his side after the break. Bolton look weak in defence and Albion must build on the lead in the second 45.

14:45 – Almost 3-1 for the home side. Murphy’s effort is pushed over for a corner and the referee blows the HALF TIME whistle. Deserved lead for Brighton and the next goal could kill Bolton off.

15:43 – GOAL FOR BRIGHTON – Absolutely brilliant goal for the home side. Knockaert virtually runs the whole length of the field, cuts the ball inside to Zamora who sublimely flicks the ball into Hemed’s path and the Israeli striker hits the back of the net with ease. Fantastic team goal. Brighton 2-1 Bolton

15:41 – Emile Heskey turns Dunk well on the halfway line, before running out of steam as the ball trickles out for a goal kick. Flashbacks of his Premier League class but more noticeably, his ageing legs.

15:38 – Boo’s go around the Amex towards referee Rob Lewis. Hemed goes down inside the penalty area, only for the referee to wave away his appeal. Would have been a harsh penalty decision but I’ve seen them given.

15:35 – A harsh free kick is given against Zamora on the halfway line. The striker was penalised for standing his ground and the Amex faithful let the referee know their feelings.

15:31 – Albion’s corner comes to nothing but a promising reaction from the home side to Bolton’s equaliser.

15:30 – CHANCE – Some brilliant build up play from left to right ends up at Kayal’s feet 25-yards out. His low driven swerving effort is pushed away by Amos and Albion have a corner.

15:28 – Hemed wins a free kick about 25 yards out but Stephens’ effort hits the wall and his follow up is blazed high and wide.

15:26 – Zamora holds the ball up well in the middle of the park, before playing it out wide to Murphy, who teed up an onrushing Ridgewell. His cross was not good enough and Amos cleared up with no trouble.

15:24 – Brighton paid the price for dropping the early tempo they set. Disappointing for Chris Hughton but there are certainly more goals to be had in this game.

15:22 – GOAL FOR BOLTON – Silva crosses the ball low from the left, only to evade Conor Goldson and fall at the feet of Heskey  in front of goal, who does the rest from there. Poor defending from Brighton and the game is all square. Brighton 1-1 Bolton

15:20: A cross falls to the head of Emile Heskey six yards out but the former England international doesn’t get the connection he needed and a good chance disappears for the away side.

15:17 – Albion fans in full voice behind David Stockdale’s goal. The crowd are more than happy with the comfortable lead their side deserve.

15:15 – It was all Brighton’s early pressure deserved and they only look like building on the lead from here. Bolton look uninterested.

15:13 – GOAL FOR BRIGHTON – Jamie Murphy is released down the left wing and calmly slots the ball past a stranded Ben Amos. Brighton 1-0 Bolton

15:11 – Wellington Silva is wasteful with his effort and the ball goes sailing wide of David Stockdale’s goal.

15:10 – After a scramble on the edge of Brighton’s penalty area, Dale Stephens commits a foul on Darren Pratley just outside the box. Free kick in a dangerous position for Bolton.

15:08 – Long balls to Emile Heskey looking like Bolton’s early game plan. Not working as of yet, Albion winning the aerial duels.

15:06 – Brighton dictating the early pace of this game, seeing plenty of the ball and pinning Bolton deep into their own half.

15:00 – Rob Lewis blows his whistle and the game is underway.

14:57 – Team’s making their way out onto the pitch, Brighton in their usual blue and white stripes, Bolton in all black.

14:48 – Today’s referee is Rob Lewis (Shrewsbury), who is yet to officiate a Brighton game this season. He has already taken charge of 19 games this campaign, handing out 61 yellow cards and three reds.

14:47 – Brighton can jump into third with a win this afternoon, if Burnley fail to pick up points on the road against Reading. They’re guaranteed to stay within the play-off places but could drop to sixth if results go against them. Bolton could climb to within one point of safety or return to the bottom of the league table.

14:45 – In the reverse fixture earlier this season, a Gary Madine stoppage time equaliser completed the Trotters’ comeback from 2-0 down, following goals from Dale Stephens and Jamie Murphy that put the away side well on their way. Neil Danns pulled one back before half time, prior to Murphy’s controversial red card that gave Bolton the upper hand. Brighton were close to holding out for the win but Madine rose highest in the 94th minute to share the points.

14:43: Brighton name an unchanged starting XI with Jiri Skalak and Sam Baldock both on the bench. James Wilson doesn’t make the squad for today’s game. Derik Osede comes in for Dean Moxey in Bolton’s only change from their 2-1 win against Rotherham United.

14:17 – Bolton enter the game off the back of their best string of results this season, picking up seven points from their last three league games. Six of those points came from home games against two of the Championship’s bottom five and Neil Lennon’s struggling side has yet to win against any of the league’s top ten.

14:14 – Brighton have turned their form around following a run of eight games without a win throughout December and January, rounding off a hat-trick of wins last Friday, comfortably beating Brentford 3-0 with goals from Anthiny Knockaert, Tomer Hemed and Jamie Murphy.

14:11 – Good afternoon and welcome to the Amex Stadium for Brighton & Hove Albion’s game against Bolton Wanderers. It’s 4th v 23rd here on the south coast as Brighton look to make it four consecutive wins against a team who are yet to win on the road this season.