Brighton train services branded a joke, as Network Rail is given warning

Brighton commuters are calling local rail services a joke, despite the Government’s new pledge earlier this week to reinvest in the railways. Commuters from the Preston Park Train Campaign have not been impressed with the 2020 service so far and have even shared a joke on their social media site about GTR Bingo – GTR – Govia Thameslink Railway being one of the three Brighton operating companies together with Gatwick Express and Southern. 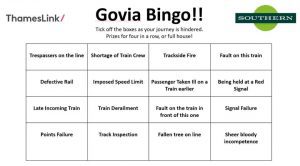 Two years ago in 2018 local MP Caroline Lucas backed the Preston Park commuters’ fight to get more trains to stop from the busy Preston Park station and the group have since continued to raise awareness on the constant problems they face.

Currently, the main criticism is the constant delays and cancellation of trains, with work meetings missed and jobs threatened.  This has now even extended to complaints that cancelled trains are ruining family life for many commuters due to terrible service over the winter months. Also under fire are the increased ticket prices, lack of online tickets and baffling ticket price options which can vary as much as £10 depending on where you buy the ticket from and whether you split the journey.

Brighton Line Commuters which has been campaigning since 1985 and spokesperson Shelley Atlas confirmed that “When fares rise passengers want to know where their money is going……. and obviously for improvements by Network Rail  – safety issues are top of the list”

Brighton commuters have now been sharing the misery of other lines such as a high profile tweet from comedian Robin Ince who has criticised London and North Railway’s cancellations for not allowing him to see his son.

The rail operators are aware of the pressure on the service with Network Rail stating: “The Brighton Main Line and its branch lines, are among the busiest and most congested in the country, carrying 1,700 trains and 300,000 passengers every weekday.”

With the news today that the failing Northern network has lost its franchise, other train operators are now under threat including the South Western and South Eastern networks whose franchises are due to end on 1st April.

Talk About A Revolution: Exclusive Q&A with comedian Simon Munnery