In recent days, news has been circulating regarding the impact of Covid-19 lockdowns on global air pollution levels.

As daily life has ground to a halt across the globe, air quality has started to improve as a result of the sharp reduction in traffic that causes much of the pollution in cities.

Monitoring from cities worldwide has shown significant reductions in levels of key pollutant nitrogen dioxide, which comes primarily from vehicle exhausts. For example, compared with this time last year, levels of pollution in New York have decreased by nearly 50% because of measures to contain the virus. Cities in the UK have seen similar reductions.

Emissions of the planet-heating gas carbon dioxide have also fallen sharply, partly as a result of flights being cancelled and a big decrease in global coal consumption. 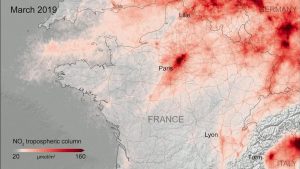 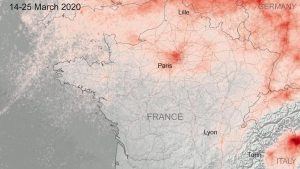 Data showing the reduction in air pollution levels in France before and after lockdown. Image: Sentinel-5 satellite images

The natural world in recovery

More and more evidence, such as this data regarding the dramatic drop in air pollution levels, is showing that the Covid-19 pandemic is giving the natural world the chance to recover.

While we’re all in quarantine, nature has been busy reclaiming its spaces.

Last week, images circulated showing the transformation of Venice’s famous canals, which have seen a resurgence in wildlife since Italy was put in lockdown. Free from polluting tourist boats and large cruise ships, shoals of tiny fish, crabs and multicoloured plant-life have begun to flourish virtually overnight.

In the UK, Londoners have reported seeing and hearing far more wildlife than usual, as animals return to areas usually dominated by humans and pollution. 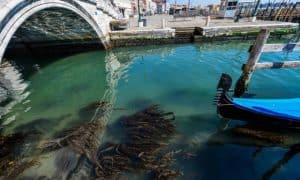 Seaweed can now be seen in Venice’s waters, which have benefited from reduced motorboat traffic. Photograph: Andrea Pattaro/AFP via Getty Images

This evidence is providing a stark reminder of the hugely damaging impact our modern lifestyles have on the natural world, but also just how quickly nature can recover when given the chance.

The environmental changes being reported have got some people hoping that this terrible tragedy could be the beginning of a meaningful shift towards serious, global action to combat the climate crisis.

Maybe, as we hunker down with cupboards full of essentials, our sense of what consumer goods we actually need will shrink. Maybe, even after the acute phase of the crisis has passed, we will think twice about unnecessary long distance travel. Maybe, as we see the natural world recovering around us, we will realise just how much nature enriches our lives, and will resolve to protect it and allow it to flourish.

Maybe. But equally, there is a good chance we might all want to get our ‘normal’ lives backs as quickly as possible, feeling more keen than ever to frequently jump on planes or buy more disposable goods.

Besides this, changing personal habits will mean very little if we do not also put pressure on governments to decarbonise the global economy, and quickly. The aftermath of this crisis could very easily see industrial production and carbon emissions ramp back up as economies rush to rebuild, perhaps also stalling the transition to green energy.

Whether nature’s recovery lasts really is up to us.

Tired, Bloated, Fuzzy Brain , Anxious , Depressed? Are you one of the many silent sufferers of Candida?