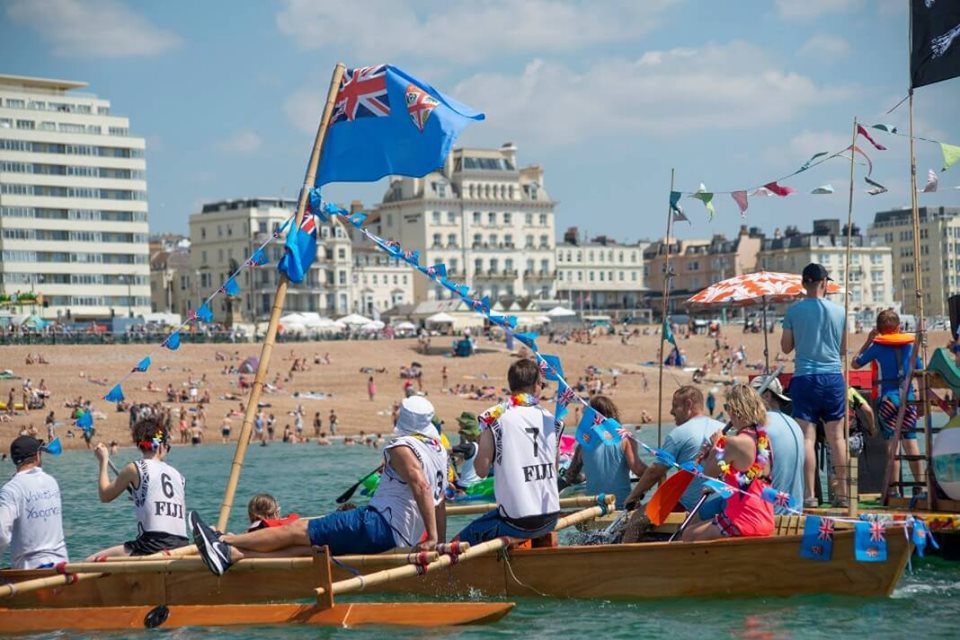 Pick up your oars and pull on your swimwear, ‘Paddle Round the Pier,’ now the largest free charity beach festival in Europe, returns to the south coast this Sunday. The setting is Hove Lawns and activities as varied as urban sports, windsurfing and paddle boarding are all on show. 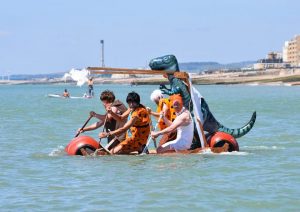 One of the most striking events of the day ‘Paddle Something Unusual,’  is a have-a-go bonanza that requires participants to create their own homemade raft. From there it’s a case of how long and indeed if the amateur-built buoys take to get around the iconic West Pier. Teams are usually made up of groups of friends, work colleagues or social clubs. It’s a wonderful opportunity for wholesome fun, promotion and in many cases fundraising. There are guidelines that must be followed but organisers embrace the slapstick nature of proceedings by asking for the vessels to be as ridiculous as possible. Previous efforts have included beds and sheds as well as trains, planes and automobiles. 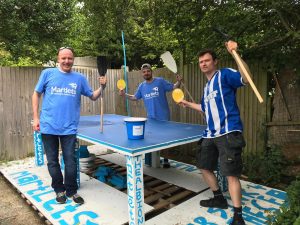 Brighton Journal caught up with ‘Paddle Something Unusual’ veteran Dan Porter, who has taken part in the festivities for nine years in a row. For Paul and his motley crew of oarsmen it’s all for a good cause. Dan’s team ‘The Albion’ – always decked in Blue and White – have entered this year with the hope of raising awareness and much needed funds for Martlets Hospice. Martlets is a Sussex-based charity that cares for people living through a terminal illness. ‘The Albion’ are hoping to raise £1000 by the time they hit the pebbles on Sunday. 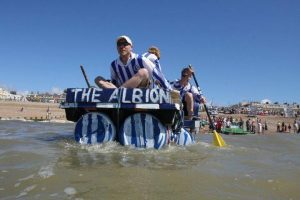 Some of Dan’s former rafts (which were all navigated safely home) have taken the form of snooker tables, arms chairs and even a golf course. He says “We’re representing Martlets because in the past year we’ve lost two people who were very close to the team. Lisette Smith and Alys Courtney were both cared for in their final days by hospices such as Martlets. They’re amazing places and we’re proud to support them and hopefully raise as much money as we can.”

It promises to be a day of belly laughs and lungs of salt water down on the seafront, the forecast looks hopeful too, and for cases such as Dan’s it’s a time to give something back to the community. For more information about the whole day and crucially Dan’s JustGiving page please explore the links below.