As you walk into this exhibition, you are instantly transported to a realm of tranquility. Artists such as Hokusai and Hiroshige take you back to beautiful scenes of 19th Century Japan.

If you are a resident of Brighton or go to University, then the exhibition is free – which makes it even better!

Poems and Prints Paired Together

Most of the prints are accompanied by a Haiku, a short Japanese poem. In English versions, the Haiku is made up of only three lines. The first line consists of five syllables, the second is seven and the third is five again. Its specific length and number of syllables means that it reads with a very distinct rhythm.

The Haikus paired with the prints allow us to reflect on the image in greater depth. As well as this, they tie in perfectly with the culture and traditions of Japan. They are short snippets and hints to what the image is about, instead of telling us in fact form.

Using this different Japanese art form as a way to inform the viewer about the work is extremely clever. It means that the language which usually describes a piece of art does not have to be so strict, but can also tie in with the work itself. It can be playful and add to the experience as a whole.

Traditional Japanese music softly plays in the background as you wonder around the exhibition. These small touches emphasize the depth of knowledge of the curators which really enhance your experience and appreciation for the various Japanese art forms. 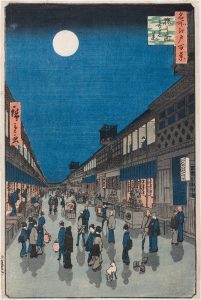 The prints are so detailed, especially when it comes to clothing and landscapes. This is incredible when thinking of the technique used to make them. The artist would have to engrave different layers of the design onto different blocks of wood. For example, they would start with a simple background block, painting colour onto it, then stamping it onto the paper. Gradually more detail is added, carving different parts of the image into wood, then printing it onto the paper.

It is a very strenuous process, so when looking at the end product, it is hard to believe that each layer had to be intricately carved into wood before reaching the paper itself. Once the blocks are created, the images can then be mass produced. So, they could be used in books or as posters, sometimes including subtle branding, as early forms of advertising. 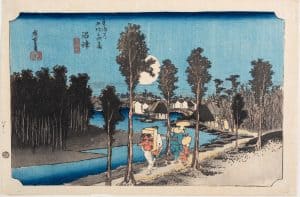 The Depictions of Life in Japan

Most of the images show serene scenes, lavish with extravagant clothing and mystical landscapes. The abundant creases of clothing each person is wearing can demonstrate their social status. So, in the prints, great emphasis is put on the different patterns and elegance of the fabrics.

The landscapes include different areas of Japan, such as Mount Fuji, quaint towns and various cliffs surrounded by waves. Different plants included in the scenery symbolise the different seasons. As well as the beauty behind these landscapes and activities, the works have a deeper meaning.

The pieces were often made to depict fleeting moments in life, highlighting the fragility of existence. They show a large natural world, with people taking part in various different activities, but they are a glimpse of an event that has passed. The various cherry blossoms may be depicted in full bloom, but they can epitomise a beautiful moment passing in time as the branches will not be full for long.

The style of print is called ‘Ukiyo-e’ which means, ‘Pictures of the Floating worlds’. This actually refers to the licensed brothels and theaters in the larger cities of Japan at the time. We can gain a strong sense of what life was like in Japan and the kinds of activities the wealthier members of society took part in.

You can learn so much from the exhibition, while immersing yourself in the culture of 19th Century Japan. Even without knowing the context behind the prints, they are extremely aesthetically pleasing, which is what makes them so easy to appreciate. 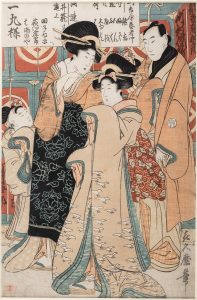 “A Prince’s Treasure” Displayed at the Royal Pavilion

Trans student still hopeful for fertility treatment on the NHS