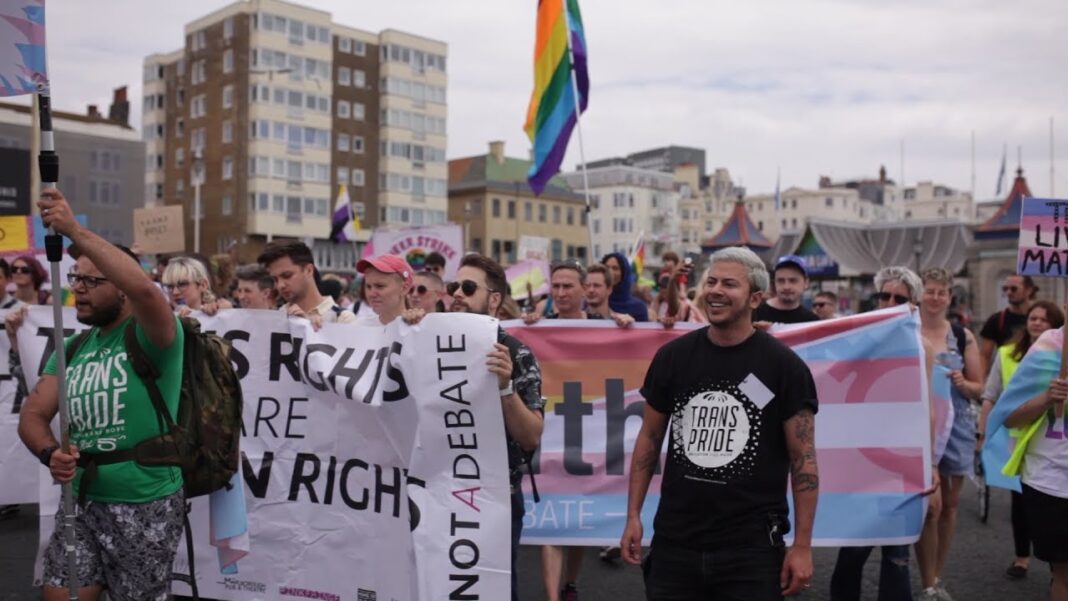 Brighton & Hove Green Councillors will join in solidarity with the city’s trans and non-binary community and allies once again as part of the annual Trans Pride celebrations in the city, taking place this weekend.Flags will fly over council buildings to join in solidarity and celebration.

Now in it’s 9th year, Brighton & Hove Trans Pride is one of the first and largest Trans Pride events in the country – celebrating the city’s trans community and highlighting the ongoing campaign for equality, diversity and the urgent need for an end to transphobia and discrimination.

Trans Pride will host a special online festival on Saturday 17th July, with an online broadcast live from Brighton featuring special guests throughout the day, in addition to workshops and online exercise events. [1]

Greens stand shoulder to shoulder with the city’s trans community and say it is vital that the call for equality continues, urging all to join in celebrating diversity and to challenge discrimination, prejudice and harassment.

To help mark the event, the trans pride flag will also fly from Hove Town Hall and Brighton Town Hall on Saturday, in a show of solidarity and celebration. [2] Green Councillors continue to campaign for trans rights, with flagship work by the Green Group of Councillors on Trans Equality recognised for an award by the Centre for Public Scrutiny, and work ongoing to tackle hate crime and support young people. However Greens say more must be done in the push for equality, against a backdrop of rising misinformation and transphobia being shared online and in some media comments. [3]

“Trans Pride is a fantastic event in our city; with thousands of people attending each year – and organisers have done so much to move the event online. The push for trans rights and equality goes on – and we’re proud to once again stand in solidarity with the fantastic celebrations this weekend.

“Trans Pride is also a powerful reminder that we need to do more to end to devastating discrimination and abuse. According to a survey done just last year, 4 in 5 of respondents to a Galop poll reported experiencing a form of transphobic hate crime. We know that the pandemic has also deepened the inequality many trans people face. From increasing difficulties with access to healthcare, to mental health support, trans people are too often forced to hide their identity for fear of recrimination. Communities have also been unable to meet together, to offer support or help, but the internet is not always a safe space. Reports found 15% of comments made in the past three years about trans people online are hateful – and this has real life consequences. [3]

“Against this backdrop we come together to celebrate our trans community, to champion the strength of the fight for equality, and to assert that trans rights are human rights. Our city has a proud history of diversity and celebration of our LGBTQIA+ communities; from the trans scrutiny panel launched under the previous Green administration, work with our schools and on mental health, and trans pride is an important way we say loudly that this will continue.  We demand a more equal future for our trans community, free from hatred and prejudice.”