Home News How remote working could change the UK 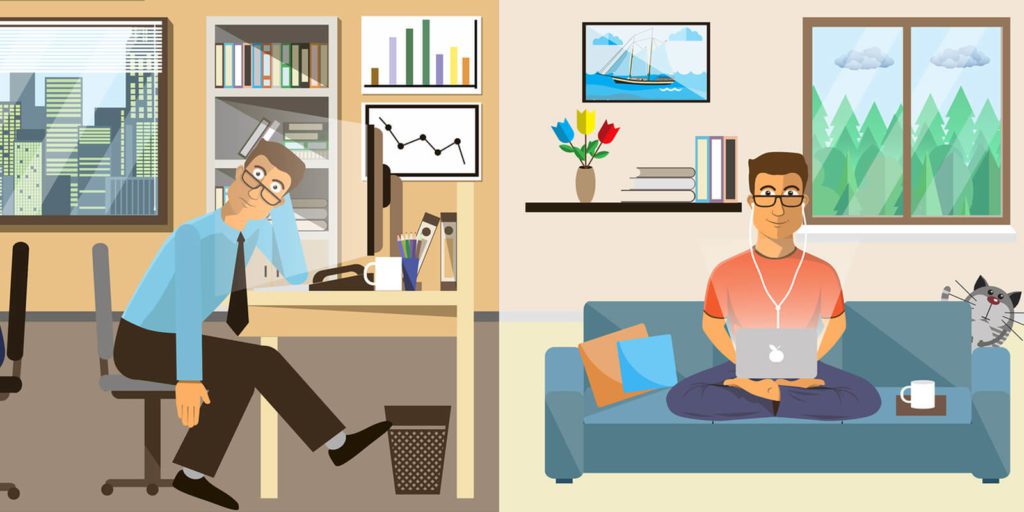 City centres lying empty because so many people are working from home have received considerable media attention since the pandemic took hold. As the picture of a post-COVID world slowly comes into focus, it seems we are unlikely to return to the office in the same numbers as before. Large companies such as Aviva, Dropbox and Facebook have already committed to continuing remote working in the years to come.

This has important implications for where economic activity takes place. Not only will it affect city centres, it also means that many residential neighbourhoods are likely to change permanently.

To help understand these geographic shifts, we have recently published the results of a research project. In this paper we show which neighbourhoods in the UK will be affected for better or worse and what it will mean for how the economy operates in future. In deference to the online meetings app that has become an ubiquitous part of remote office working, we decided to call these effects the zoomshock.

We calculated the zoomshock as the change in economic activity due to working from home that has taken place within each UK neighbourhood. Simply put, this is the difference between two phenomena: the inflow of employment, which refers to people who live in a given neighbourhood and normally work elsewhere but are now working at home; and the outflow of employment, which is people who normally work in that neighbourhood but live elsewhere and are now working from home.

By our calculations, the potential reallocation of economic activity across different areas is large. The City of London, which is the heart of the UK financial services industry, could lose over 70% of its labour force if everyone who can work from home does so in the long term. This would equate to £9.1 billion in annual earnings. If the average worker only worked from home one day a week post-COVID, that would still account for £1.8 billion in lost activity, but it could well be that two or three days a week becomes the norm.

This economic activity will instead become less geographically concentrated, spread across different residential neighbourhoods. As an example, the local authority area of Lewisham in south-east London could see an increase in output of up to 60% relative to pre-COVID economic activity, or approximately £1 billion a year. You can see in the map below how we are forecasting this to play out across the capital, with shades of blue representing gains and shades of red representing losses.

The effect on Greater London

This has implications beyond the demand for slippers and umbrellas. Many of us who commuted spent money on services while at work, whether train-station coffees, lunchtime gym or barber visits, or after-work drinks. After the pandemic is over, we expect the zoomshock to continue to substantially affect these locally consumed services. So a move towards home working will mean that people demand more haircuts, coffees and restaurant meals near their homes and fewer near their offices.

There is already evidence of the importance of these effects. As you can see in the diagram below, in the brief period of relaxed lockdown measures from July to November 2020, London authorities such as the City that were negatively affected by remote working took a greater hit in retail and entertainment activity compared to 2019 levels than authorities like Lewisham that were positively affected. (It is worth emphasising that all areas were down compared to 2019 because the pandemic weakened economic activity across the board.)

This is not just a London phenomenon. In Bristol, Cardiff, Glasgow and other UK cities, our research shows working from home has led to a shift away from city centres into the suburbs. Areas in which many commuters work, such as central Manchester, will lose out, while areas in which many commuters live, such as East Dunbartonshire on the northern outskirts of Glasgow, will win.

The effect in England and Wales

The effect in Scotland

Clearly, the zoomshock is leading to a redistribution of activities from urban city centres to residential suburbs. But a second, more subtle, conclusion is that there is substantial variation across even adjacent neighbourhoods. This is driven by local geographic clustering in job type by neighbourhood and which jobs can be done at home.

As you can see from the next graph, which plots a neighbourhood’s proportion of residents who can work at home against its score on the multiple index of deprivation, it is broadly the case that wealthier neighbourhoods have more potential remote workers. If working from home becomes the new normal, many restaurants, cafes, gyms and other locally consumed services will migrate away from city centres towards these neighbourhoods.

This is likely to make these wealthier neighbourhoods even more desirable places to live, giving them better amenities compared to more deprived neighbourhoods than they have already. In other words, the inequalities between different neighbourhoods are liable to become worse as a result of the zoomshock.

Many workers will probably return to the office once the COVID-19 crisis is over, but it is likely they will not want to be there as many days as before. If half of the workers in a city centre work from home only two days a week, that is a 20% decrease in potential demand for the surrounding local services.

The demand will not necessarily be lost, but just reallocated to the neighbourhoods where these workers live. Government policies to help the economy recover have to reflect this reality. Allocating scarce resources to support businesses in neighbourhoods experiencing a negative zoomshock may be in vain – businesses should be encouraged to follow the demand. This underscores the importance of monitoring how remote working develops once the public health crisis begins to subside.

To end on a positive, according to our model, more neighbourhoods win than lose from the zoomshock. This is because densely concentrated office work in urban centres is spread across a number of less dense residential neighbourhoods. In this way the zoomshock introduces challenges for how we use urban centres, but also opportunities for a new way to think about life in our suburbs.