Home People “I much prefer the fictional Mike to the Mike in real life”:... 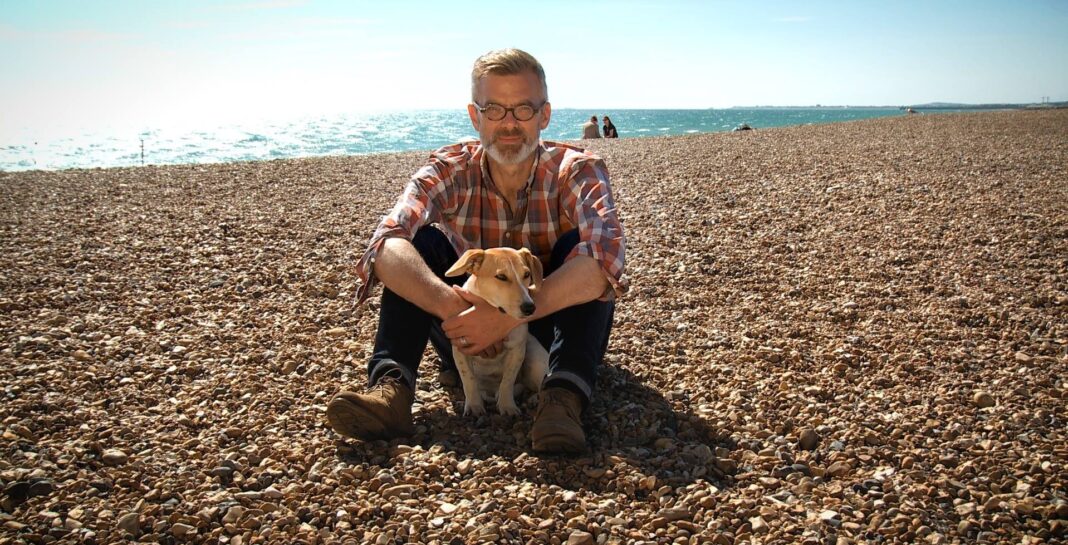 Having failed his art A-level twice, Mike Dicks is not the most likely candidate for author and illustrator. But along with his adorable dog Scrabble, he’s just published the adorable Mike&Scrabble: A Guide to Training Your New Human. He landed the deal when a publisher emailed Scrabble last May asking her if she could tell her lazy human to compile his pictures into a book, and she did a wonderful job of negotiating the deal. 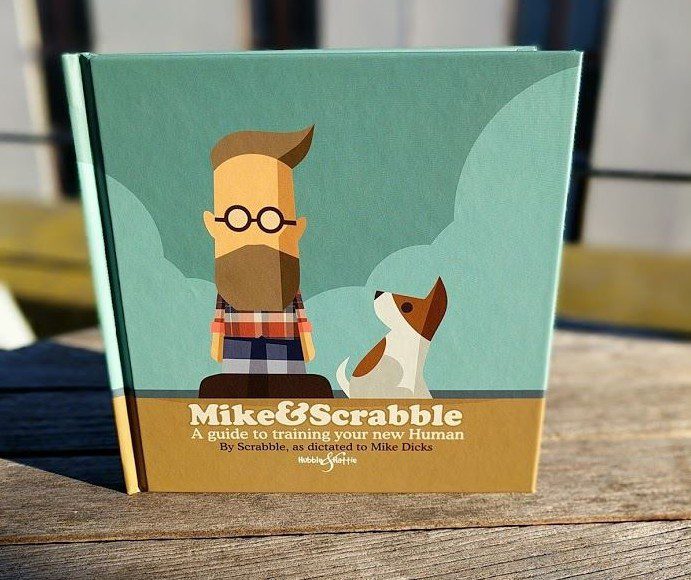 He tells us: “I am so excited. When people send a picture of their dog or them with their book, it’s just such a beautiful thing knowing it’s sitting there in their toilet. They also love it enough to take the time to take a photo and send it to you and they want Scrabble’s approval which is all so sweet.

The biggest fan of Mike’s new book is his technophobe Mum, who marched into Waterstones five days before the official release date and demanded a copy. Some of the proceeds from the book sales go to Allsorts Dog Rescue Sussex, which is where Mike got Scrabble from. Mike also chose Macmillan Cancer Care to receive a share because he was diagnosed with cancer of the blood two years ago. “They call it ‘the good cancer’,” he says, “not that there is any good form of cancer – it has a habit of coming back but it doesn’t have a habit of killing you, basically.”

Mike’s diagnosis caused a huge shift in his way of thinking and got him asking himself what had ever stopped him from making money out of drawing. He came to Brighton and Hove in September 2015 to make the big career change and says the city has been the making of the book: “I just love this city – creatively, it’s one of the best places in the country.

“It’s also got these nice icons of the Pavilion and the Pier, and even the sky is amazing.”

It all started with a drawing of Brighton Palace Pier, which quickly had people demanding prints. Mike went on to draw and sell more prints and then greetings cards, but it’s dog ownership which inspires him most. Three-year-old Jackshund Scrabble found Mike 15 months after his move to Brighton and Hove and she has owned him ever since. It’s easy to see why any book about her would be so well loved – she’s everyone’s best friend and has a ridiculously large personality for such a small lady. 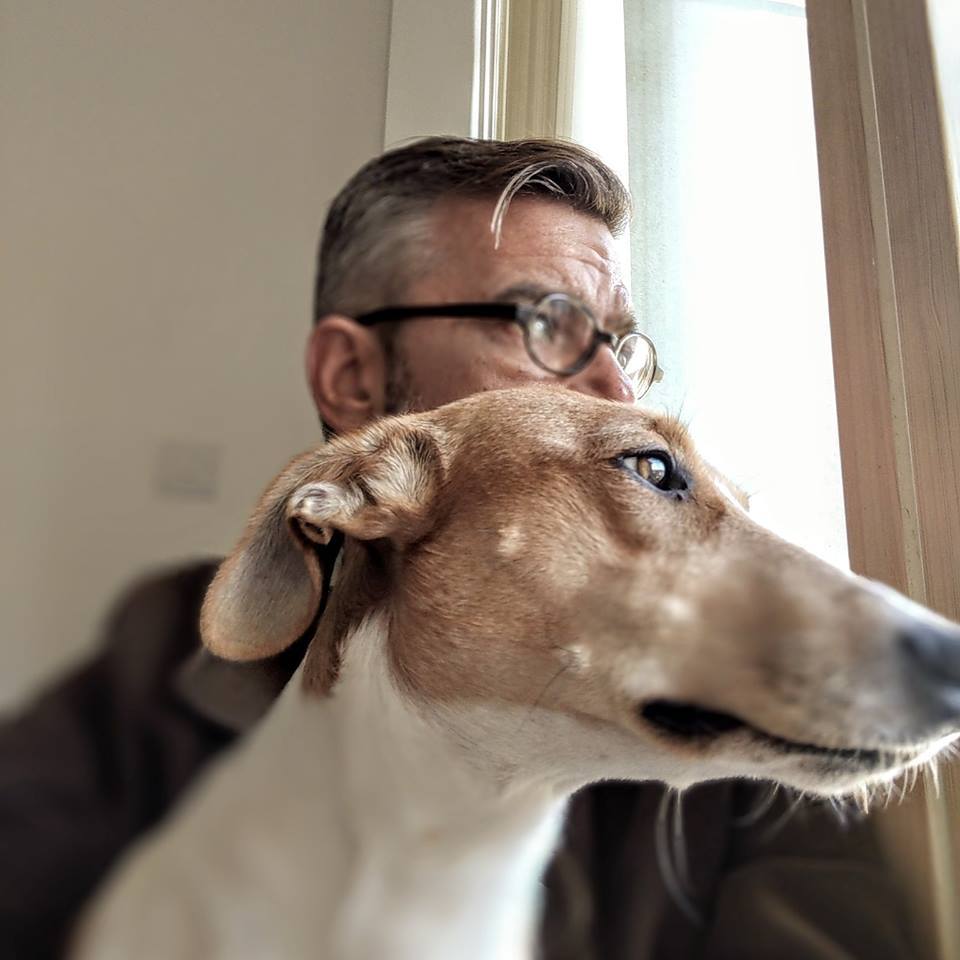 When we ask Mike about getting Scrabble, he says: “I was largely trying to prove I was a responsible grown-up because of the various things going on in my life. And then I just sat there looking at her going ‘what the hell have I done? I am now responsible for this thing.’”

To cope with these thoughts, Mike started drawing and posting cartoons to explain Scrabble’s quirks, which he takes as comments or conversations. For example, peeing on the floor means ‘your flat needs cleaning’ and going back to sleep for the third time means ‘I hate Mondays, especially when it’s drizzling outside’.

The pair are now inseparable and Scrabble motivates Mike to keep working on his grumpy days. He says: “Scrabble is a bit dopey but I think she’s like my older sister. She just keeps reminding me to do things like go for a walk. I get the sense of her sitting behind me making me work.

“This morning I was working on a different project and I could feel her looking at me as if to say ‘either you take me for a walk or you draw a cartoon of me’. It’s all in my head, obviously, but she’s good for me from that point of view.”

A little girl shyly walks over and asks if she can say hello to Scrabble. Mike lets her off the lead and the two become friends for life. She then tries to steal some human food.

Mike and Scrabble have turned the tables on what pet ownership means – Mike describes himself as a fictional character whereas Scrabble has her own e-mail address and author profile on Amazon. The front cover of the book even reads “by Scrabble, as dictated to by Mike Dicks”.

“I think the thing I like about Mike&Scrabble is Mike&Scrabble world, which is a place I go and live in sometimes,” muses Mike. “I much prefer the Mike in Mike and scrabble to the Mike in real life – he’s just this dumb idiot going through life and he’s got no agency.”

Mike would love to go a step further with this idea – amongst his many book ideas at the moment is a guide to breeds of humans for dogs. He came up with the idea after surveying hundreds of his readers and finding 8/10 talked to their dog all the time and almost 4/10 preferred talking to the dog than to other people. 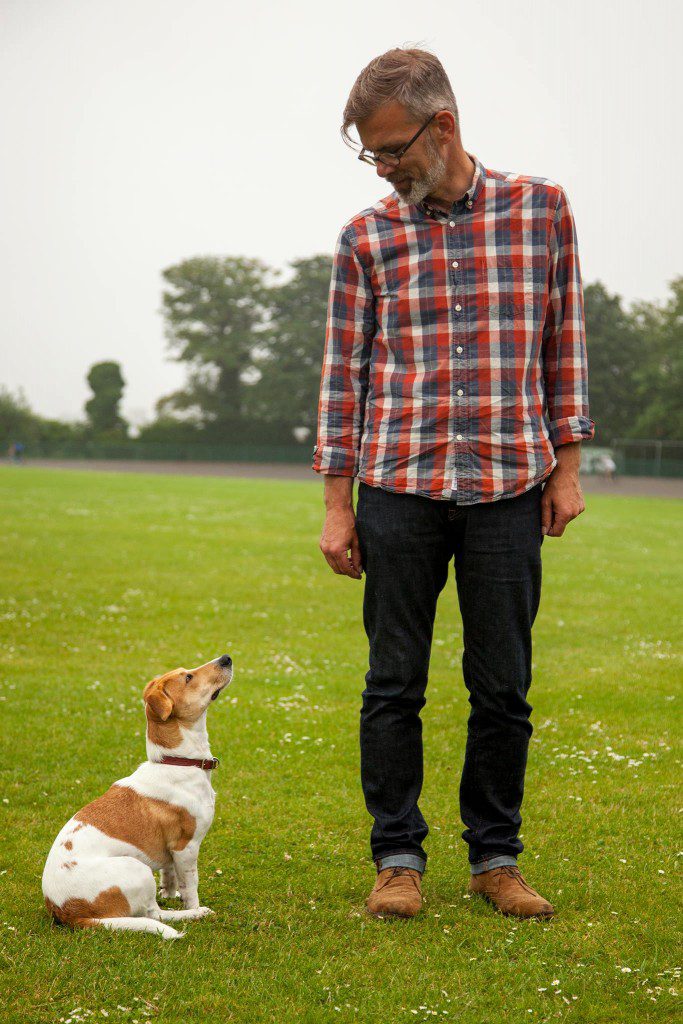 Book two in the Mike&Scrabble series is now complete, and there are many more titles already in the pipeline for Mike. It’s safe to say he is well and truly an author at this point. So what’s his life advice for other creatives? “Be a yes-man, just go with your gut feeling and stick with that,” he says. “You do not want to be lying on your deathbed wishing you had made another powerpoint.”

If you’d like to meet Scrabble, she will be signing books and pulling pints of dog beer at Zorian Artworks on Friday 3 March from 4 pm until 7 pm. Mike might even turn up, but he’s very well trained. Every dog in Brighton should think about attending, but humans are optional.

Artist of the Week: Cecil Rice

Artist of the Week: Peeky Free

Why this Thursday’s Election Matters To You