As part of National Bike Week Brighton’s famous Naked Bike Ride will return to the city on Sunday 10th June, and is inviting riders to take part – as bare as they dare!

In an attempt to raise awareness for the vulnerability for cyclists on the roads, as well as protest against oil dependency and celebrate the human body, hundreds of cyclists will take to Brighton’s streets next week baring all or baring their best fancy dress! The cycle will take place as part of a World Naked Bike Ride, which sees fifteen other rides in the UK as well as fifty cycles all over the world.

Having begun in 2006 Brighton’s naked bike ride is celebrating it’s 13th year, as well as it’s rising success, with over 1,000 riders having taken part in recent years. In conjunction with Sussex Police, as of 2007 full nudity has been permitted for the braver cyclists, but don’t fear if you’re not quite ready to go the whole hog in front of spectators – fancy dress and body paint are also encouraged. 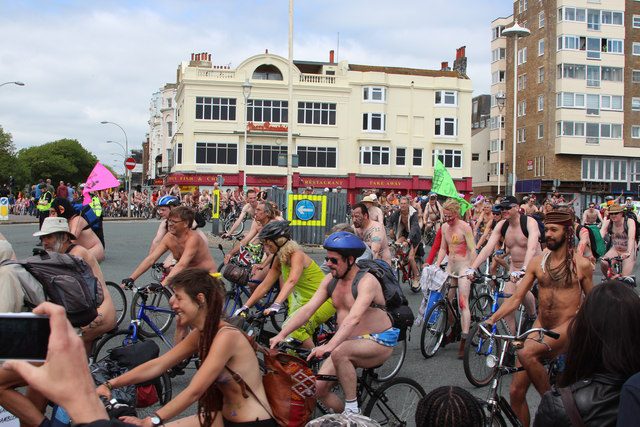 Whilst this *ahem* cheeky ride will also be taking place in other cities at a similar time, including Southampton and Portsmouth, the rumour of Brighton being the birthplace of the modern bicycle makes our city the perfect place for such a momentous bike ride.

Organisers have held several fundraisers in the run up to the ride, with last weeks ‘Burly Girly’ show proving to be a huge success. If you’d like to get involved ahead of Sunday, head down to the pub quiz fundraiser taking place at The Old Albion pub tomorrow night – there’s a tonne of great prizes to be won including a bike! Check the Facebook event for more information.

Things kick off at around 11am on Sunday 10th June – the ride will be followed by a dip in the sea at Black Rock naturist beach, and an afterparty at Volks.

For more information on how to get involved, see their website.