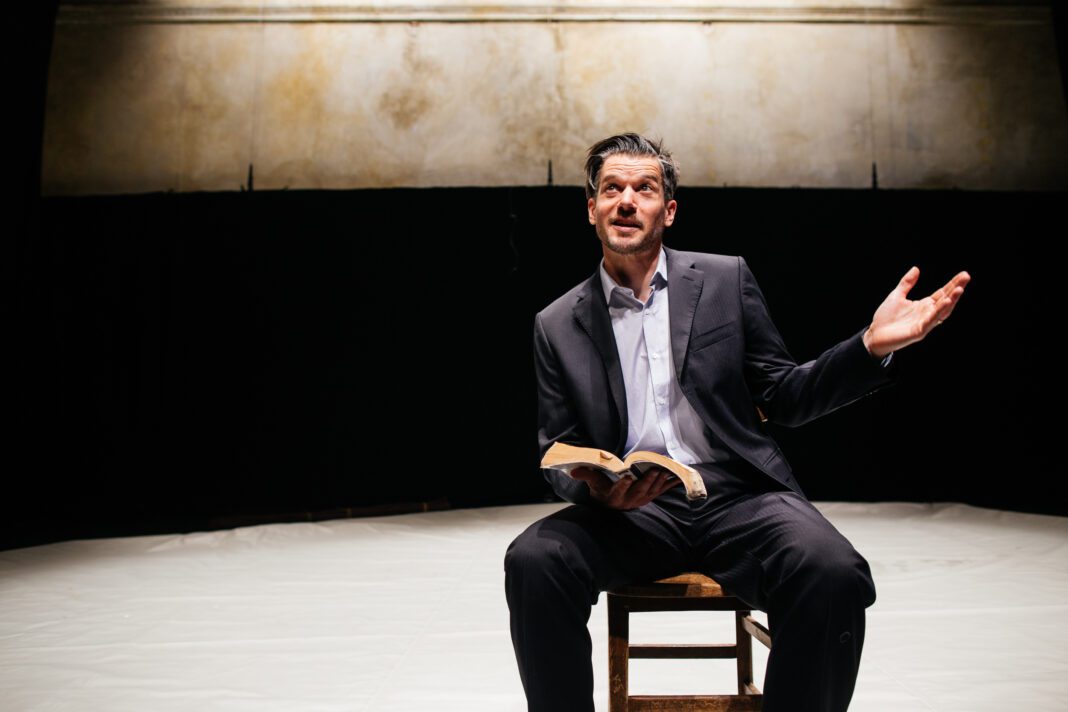 Lost Dog’s award-winning performance, Paradise Lost (lies unopened beside me) is to be revived and re-staged at Brighton Dome on Saturday 26 June.

An adaptation of John Milton’s epic 17th century poem, Paradise Lost, the one-man show is conceived, directed and performed by Laughton-based actor, dancer and Lost Dog founder Ben Duke. Using theatre, comedy and physical movement, Duke takes the audience on a journey, re-telling the creation of everything but condensed into just 80 minutes. Beginning with Lucifer’s rebellion and ending with Adam and Eve’s expulsion from the Garden of Eden, Paradise Lost (lies unopened beside me) is for anyone who has ever created anything and then watched it spiral out of control.

The critically acclaimed show began touring UK theatres in 2015 and was named as one of The Guardian’s top ten dance performances of the 21st century in 2019.

Following a year of lockdown and being unable to perform publicly, Lost Dog have revived the concept to present a fresh take to audiences, as they safely return to theatres following the coronavirus pandemic.

“Lost Dog is delighted to be bringing Paradise Lost… to Brighton Dome. As a Sussex-based company it’s always a particular pleasure to perform in a local venue for local audiences. We moved to Laughton 11 years ago into a housing community where there is space I can use for rehearsal. That simple luxury changed my relationship to how I make work. It allowed me to stop looking around at how everyone else was doing it and try and work out how I wanted to do it. Both personally and professionally the move to Sussex was a huge turning point, it has shaped the work I make, how I live, and how I see the world.

For me, 2020 was a time of panic and creative paralysis. I felt unsafe and it made me realise what a privileged position I normally occupy in order to have the head space for art. It is a luxury and one that I took for granted before the lockdown. In the name of ‘coming back greener’ I am offering not something new but something old. I am upcycling Paradise Lost… which involves getting rid of the cobwebs on the smoke machine and getting a new costume with a larger waist!”

Tickets £15 per person advance booking only, for households or bubbles of up to 4 people. Seating is socially distanced and available as cabaret style tables or in stalls.

How Modest Fashion is Trending: Style Ideas You Can Try

The Flattening: Why Are All Brands Going Minimal?