Home Culture NFT art: the bizarre world where burning a Banksy can make it... 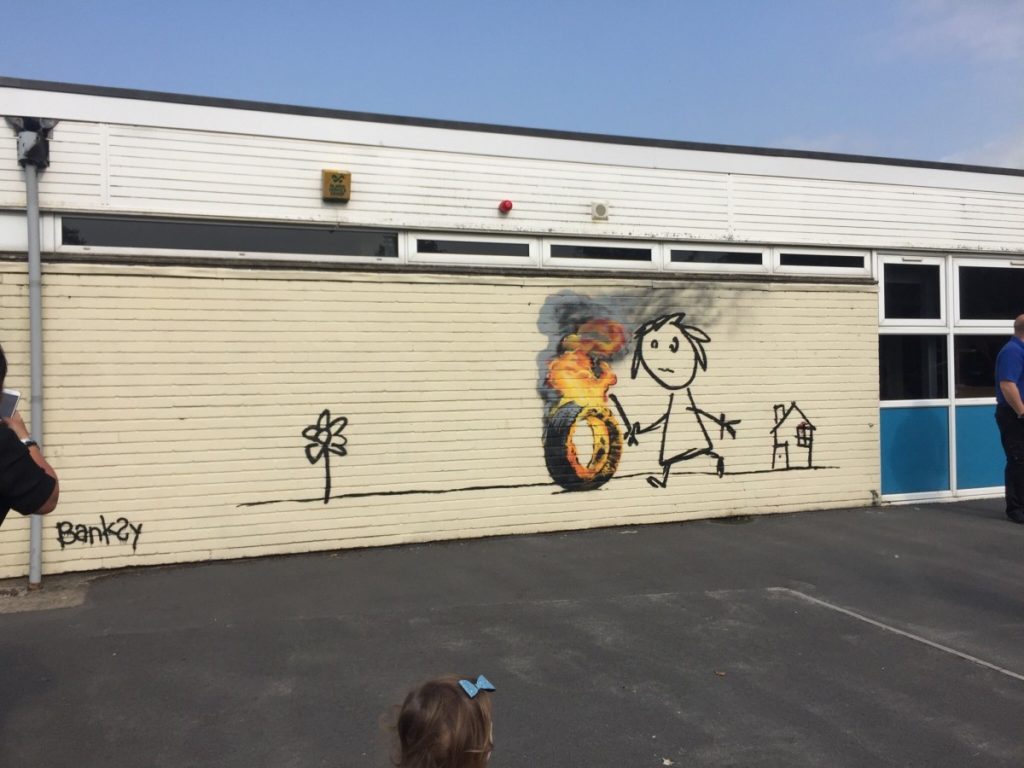 A blockchain company has bought a piece of Banksy artwork and burnt it. But instead of destroying the value of the art, they claim to have made it more valuable, because it was sold as a piece of blockchain art.

The company behind the stunt, called Injective Protocol, bought the screen print from a New York gallery. They then live-streamed its burning on the Twitter account BurntBanksy.

But why would anyone buy a piece of art just to burn it? Understanding the answer requires us to delve into the tricky world of blockchain or “NFT” art.

It blends the niche subculture of cryptocurrencies with long running philosophical questions about the nature of art. No wonder people have difficulty explaining it all.

At its simplest, a NFT artwork is made up of two things. First, a piece of art, usually digital, but sometimes physical. Second there is a digital token representing the art, also created by the artist.

In the past, artists might have provided a signature or the gallery a certificate to authenticate an artwork. This is a method of verification or proof to show this really was a painting by, say, Matisse or Klimt.

In 2008 the creator of Bitcoin, Satoshi Nakamoto, introduced a new method of verification known as the blockchain. Blockchains were historically used to record financial transactions, but they’re pretty malleable. These days, you can find everything from collectable games to new methods of finance – all living on blockchains.

The most important feature of blockchain for art is that blockchains are impossible to change. An artist can provide a proof authenticating an artwork which can never be altered. This proof can then be sold at auction passing it from artist to collector, making blockchain art highly liquid.

Read more:
NFTs explained: what they are, why rock stars are using them, and why they’re selling for millions of dollars

What collectors buy are “non-fungible” tokens (NFTs). Non-fungible means either one or a limited run is ever made. NFT tokens cannot be replicated.

In some cases the art will be stored on the blockchain, but more commonly the NFT will reference an external artwork. While many people might not consider this “owning art”, it’s clear many collectors do. The implication is NFT artworks are scarce and therefore valuable.

Newcomers to an NFT marketplace might be struck by the low quality of the artwork. With no barrier to entry, everyone is free to become a blockchain artist – and it shows. But this is a naïve reading of what is going on. Much blockchain art is sought after for reasons beyond aesthetics.

For instance, many NFTs, such as Cryptopunks, are sought after because of their age, like blockchain antiques. The most expensive Cryptopunk sold for US$1,608,032(£1,161,481) and it is, on the surface, little more than crudely-drawn pixel art.

Cryptopunks are the oldest NFTs and it’s the data about them – their “metadata” – such as their longevity on the blockchain, that is desired. You have to look past the art and look at the medium to get what is going on.

Other NFTs, such as the Nyan Cat meme which sold for US$600,000, are already widely distributed memes. But they’re prestigious specifically in their NFT form because the creator has “signed” the work on the blockchain.

But why would someone want to destroy the original art? Well, this is what the BurntBanksy collective had to say about it:

To most, this probably sounds like gibberish. I suspect the collective are acting a little provocatively by inverting our usual preference for the physical over the digital. However, their argument follows perfect blockchain logic. They argue if we have a piece of art and an NFT, then most people will consider the former the “real” art.

To invert this they’ve decided to burn what many would consider a piece of art that is objectively valuable, a Banksy, and leave only the NFT. Unlike physical art that can be burnt or shredded or broken, an NFT is a digital token that lives on an immutable blockchain. It can’t be destroyed and should therefore, according to their logic, be perfectly safe from vandals – such as themselves.

With the “real” art work gone the NFT now stands in for the real work. What they are hinting at, of course, is that this is a potential transition from “real” to NFT in general and their stunt highlights this. Intriguingly, their act also suggests they have themselves become artists.

By burning the real piece they transform it into the NFT-only piece. To see the value in NFTs, we have to look past the art itself and at the blockchain.

Finally, it’s interesting that the collective decided to pick a Banksy piece of art to destroy, considering the artist shredded a piece of his own art live in 2018, immediately after it was sold at auction. Perhaps the work of these vandals is closer in spirit to the original artist than appears at first sight.